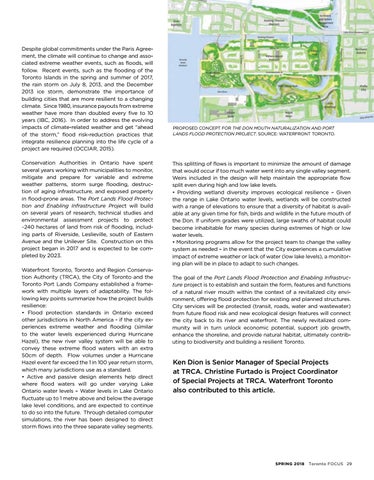 Despite global commitments under the Paris Agreement, the climate will continue to change and associated extreme weather events, such as floods, will follow. Recent events, such as the flooding of the Toronto Islands in the spring and summer of 2017, the rain storm on July 8, 2013, and the December 2013 ice storm, demonstrate the importance of building cities that are more resilient to a changing climate. Since 1980, insurance payouts from extreme weather have more than doubled every five to 10 years (IBC, 2016). In order to address the evolving impacts of climate-related weather and get “ahead of the storm,” flood risk-reduction practices that integrate resilience planning into the life cycle of a project are required (OCCIAR, 2015). Conservation Authorities in Ontario have spent several years working with municipalities to monitor, mitigate and prepare for variable and extreme weather patterns, storm surge flooding, destruction of aging infrastructure, and exposed property in flood-prone areas. The Port Lands Flood Protection and Enabling Infrastructure Project will build on several years of research, technical studies and environmental assessment projects to protect ~240 hectares of land from risk of flooding, including parts of Riverside, Leslieville, south of Eastern Avenue and the Unilever Site. Construction on this project began in 2017 and is expected to be completed by 2023. Waterfront Toronto, Toronto and Region Conservation Authority (TRCA), the City of Toronto and the Toronto Port Lands Company established a framework with multiple layers of adaptability. The following key points summarize how the project builds resilience: • Flood protection standards in Ontario exceed other jurisdictions in North America - if the city experiences extreme weather and flooding (similar to the water levels experienced during Hurricane Hazel), the new river valley system will be able to convey these extreme flood waters with an extra 50cm of depth. Flow volumes under a Hurricane Hazel event far exceed the 1 in 100 year return storm, which many jurisdictions use as a standard. • Active and passive design elements help direct where flood waters will go under varying Lake Ontario water levels – Water levels in Lake Ontario fluctuate up to 1 metre above and below the average lake level conditions, and are expected to continue to do so into the future. Through detailed computer simulations, the river has been designed to direct storm flows into the three separate valley segments.

This splitting of flows is important to minimize the amount of damage that would occur if too much water went into any single valley segment. Weirs included in the design will help maintain the appropriate flow split even during high and low lake levels. • Providing wetland diversity improves ecological resilience – Given the range in Lake Ontario water levels, wetlands will be constructed with a range of elevations to ensure that a diversity of habitat is available at any given time for fish, birds and wildlife in the future mouth of the Don. If uniform grades were utilized, large swaths of habitat could become inhabitable for many species during extremes of high or low water levels. • Monitoring programs allow for the project team to change the valley system as needed – in the event that the City experiences a cumulative impact of extreme weather or lack of water (low lake levels), a monitoring plan will be in place to adapt to such changes. The goal of the Port Lands Flood Protection and Enabling Infrastructure project is to establish and sustain the form, features and functions of a natural river mouth within the context of a revitalized city environment, offering flood protection for existing and planned structures. City services will be protected (transit, roads, water and wastewater) from future flood risk and new ecological design features will connect the city back to its river and waterfront. The newly revitalized community will in turn unlock economic potential, support job growth, enhance the shoreline, and provide natural habitat, ultimately contributing to biodiversity and building a resilient Toronto.