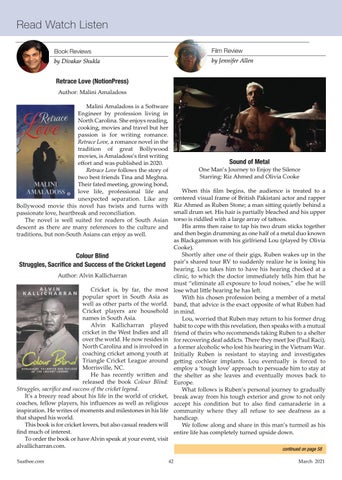 Retrace Love (NotionPress) Author: Malini Amaladoss Malini Amaladoss is a Software Engineer by profession living in North Carolina. She enjoys reading, cooking, movies and travel but her passion is for writing romance. Retrace Love, a romance novel in the tradition of great Bollywood movies, is Amaladoss’s first writing eﬀort and was published in 2020. Retrace Love follows the story of two best friends Tina and Meghna. Their fated meeting, growing bond, love life, professional life and unexpected separation. Like any Bollywood movie this novel has twists and turns with passionate love, heartbreak and reconciliation. The novel is well suited for readers of South Asian descent as there are many references to the culture and traditions, but non-South Asians can enjoy as well.

Sound of Metal One Man’s Journey to Enjoy the Silence Starring: Riz Ahmed and Olivia Cooke When this film begins, the audience is treated to a centered visual frame of British Pakistani actor and rapper Riz Ahmed as Ruben Stone; a man sitting quietly behind a small drum set. His hair is partially bleached and his upper torso is riddled with a large array of tattoos. His arms then raise to tap his two drum sticks together and then begin drumming as one half of a metal duo known as Blackgammon with his girlfriend Lou (played by Olivia Cooke). Shortly after one of their gigs, Ruben wakes up in the pair’s shared tour RV to suddenly realize he is losing his hearing. Lou takes him to have his hearing checked at a clinic, to which the doctor immediately tells him that he must “eliminate all exposure to loud noises,” else he will lose what little hearing he has left. With his chosen profession being a member of a metal band, that advice is the exact opposite of what Ruben had in mind. Lou, worried that Ruben may return to his former drug habit to cope with this revelation, then speaks with a mutual friend of theirs who recommends taking Ruben to a shelter for recovering deaf addicts. There they meet Joe (Paul Raci), a former alcoholic who lost his hearing in the Vietnam War. Initially Ruben is resistant to staying and investigates getting cochlear implants. Lou eventually is forced to employ a ‘tough love’ approach to persuade him to stay at the shelter as she leaves and eventually moves back to Europe. What follows is Ruben’s personal journey to gradually break away from his tough exterior and grow to not only accept his condition but to also find camaraderie in a community where they all refuse to see deafness as a handicap. We follow along and share in this man’s turmoil as his entire life has completely turned upside down.

Colour Blind Struggles, Sacrifice and Success of the Cricket Legend Author: Alvin Kallicharran Cricket is, by far, the most popular sport in South Asia as well as other parts of the world. Cricket players are household names in South Asia. Alvin Kallicharran played cricket in the West Indies and all over the world. He now resides in North Carolina and is involved in coaching cricket among youth at Triangle Cricket League around Morrisville, NC. He has recently written and released the book Colour Blind: Struggles, sacrifice and success of the cricket legend. It&#39;s a breezy read about his life in the world of cricket, coaches, fellow players, his influences as well as religious inspiration. He writes of moments and milestones in his life that shaped his world. This book is for cricket lovers, but also casual readers will find much of interest. To order the book or have Alvin speak at your event, visit alvallicharran.com. Saathee.com