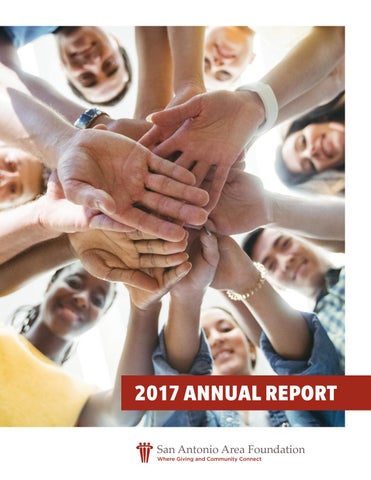 LETTER FROM THE BOARD

As you know, 2017 was a tough year for our state. Hurricane Harvey ripped through the Coastal Bend leaving a path of devastation. Following came the devastation and pain of the Sutherland Springs church shooting. Through these tragedies, our fund holders and staff were there to help.

The compassion displayed by our Area Foundation family is nothing short of amazing. A total of $5.5 million was contributed to Employee Disaster Relief Funds — and more than $3 million in grants for disaster assistance was awarded. But this wasn’t the only amazing act of compassion from our family. Donor Advised Funds awarded more than $22 million to area nonprofit organizations, while more than 650 college scholarships, totaling $3.2 million, were awarded to deserving students in our community. That’s only half of the grants you will read about in this report. On the pages that follow, you will see the commitment to support areas including children and youth, medicine and healthcare, animal services, arts and culture, and seniors. Nat Goldsmith, for whom the Area Foundation was established, once said we are repaid for our service through “happiness and pleasant memories that linger for many years.” Although 2017 was difficult for many, the compassion and giving you will see in this annual report has not only created lasting memories but has helped so many in the process. On behalf of the board, I thank you — fund holders, staff, volunteers and community partners — for your compassionate service in 2017, and for a new chapter in the Area Foundation legacy. All the best, John

FRIENDS, In this annual report, we have chosen to highlight the history and legacy of the San Antonio Area Foundation. Mannie Goldsmith and his nephew, Richard, found Rebecca Brune it in their hearts to honor President/COO the legacy of Richard’s father, Nat, by establishing a fund that would celebrate that legacy, and live in perpetuity. The contribution of $100,000 became the seed for today’s Area Foundation, which stands at more than $900 million in assets. I am so privileged to work with our wonderful Area Foundation staff, board, volunteers and community partners who understand the legacy built in honor of Nat Goldsmith. It is our great honor to ensure that nonprofits are served, that we are partnering with key stakeholders to make a positive difference in our community, and first and foremost, that we continue to honor the charitable giving wishes of our fund holders. It truly takes the collaboration of us all to ensure that our donors’ wishes are aligned to the growing needs of our community. I know that as we continue working together for the greater good, the Area Foundation will only strengthen and the characteristics of the many great individuals and families that have become the bedrock of our organizational values — community, integrity, passion and excellence — will live on. Sincerely, Becca

OUR HISTORY Beginning with a simple act of love, the San Antonio Area Foundation was born. In 1964, Richard Goldsmith created the Area Foundation at the request of his uncle, Mannie Goldsmith. Mannie wanted an enduring way to honor his brother and Richard’s father, Nat, who had dedicated his time and resources to serve the Bexar County community. Richard, a young attorney, and his uncle placed $100,000 ($10,000 each year for 10 years) in the Nat Goldsmith Memorial Trust, which provided the initial funding to start the Area Foundation. Later, a committee of bankers, lawyers, Foundation representatives and others worked for months under the leadership of Niles Chubb, to draft a Declaration of Trust. On Sept. 1, 1964, documents were signed, and the Area Foundation officially became the first community foundation in Texas.

53 YEARS OF SERVICE 1964 Richard E. Goldsmith establishes The Nat Goldsmith Memorial Trust in honor of his father. The trust began with a $100,00 gift ($10,000 per year for 10 years) at the request of his uncle, Mannie Goldsmith. (Sept. 1) Under the leadership of Niles Chubb, the San Antonio Area Foundation becomes the state’s first community foundation

1978 Semp Russ leaves $2.9 million to the Area Foundation, the first major gift that becomes a game changer for the organization

First scholarship award of $100 given to Alma Jimenz (Univ. of Texas) from the Francisca H. Eschauzier Trust

ABOUT NAT GOLDSMITH Nat Goldsmith was born in 1889 in Pine Bluff, Ark., as the son of German immigrants Leopold and Eva Goldsmith. Stricken by consumption, Leopold Goldsmith moved his wife, two sons (Nat and Mannie) and his daughter, Ruth, to San Antonio for a climate that would cure his illness. The Goldsmiths rented a house in the King William District and in 1906, Nat Goldsmith graduated from Main Avenue High School. He worked in the fruit and produce business until, at age 21, he and a friend opened the GuggenheimGoldsmith Company, a wholesale produce business. During his lifetime, Goldsmith was very active in the Jewish community but derived his greatest pleasure from his civic involvement in the community-at-large. Nat Goldsmith passed away in 1963.

For many years I have believed that the only real and lasting happiness we get is from unselfish service — whether that service be to one’s family — to one’s friends — to one’s community or to one’s country. It has been said, “Service is the rent we pay for our place on earth.”… I am convinced now that in paying that so-called rent we are amply repaid for our service in happiness and pleasant memories that linger for many years. — Nat Goldsmith

John L. Santikos bequeaths a total of $605 million in assets to the Area Foundation

Area Foundation celebrates 50 years of impact in the community

WELLS CENTER HISTORY Robert and Carolyn Beckmann Wells wanted to make a difference in the community they loved by leaving a lasting legacy for nonprofits in the area. In December 2012, the Area Foundation moved into its new building, the Wells Center, located at the Pearl Brewery. The generous bequest of the Wells has created more than 9,000 square feet of space at the Area Foundation for nonprofit meetings, trainings and capacity development, at little to no cost for the nonprofit. Since 2015, the Wells Center has hosted more than 64,943 Area Foundation visitors.

VISIONARY CIRCLE The legacy of the Area Foundation continues in large part thanks to the foresight of several fund holders known as the Visionary Circle Legacy Society. These men and women are committed to supporting the community in perpetuity through their financial plans or estates. If you have included or would like to include the Area Foundation in your estate plans, please let us know and we will recognize you as a member of the Visionary Circle.

DONOR-ADVISED FUNDS Each year, a new chapter is added to the legacy of Nat Goldsmith, but 2017 marked the most significant chapter, yet. Fund holders now have a combined total of more than $83 million ready for investment in our community. From medical care to enhancing the cityâ&#x20AC;&#x2122;s arts and cultural offerings, Area Foundation fund holders are carrying on the legacy. Note: All figures listed are before final audit.

DISASTER RELIEF & EMPLOYEE HARDSHIP FUNDS The Area Foundation works with a number of businesses to offer hardship and emergency assistance to their workforce. While some businesses offer financial assistance for everyday hardships, others have established funds dedicated to disaster relief. Hurricane Harvey, for example, left thousands displaced from their homes. Funds established at the Area Foundation provided swift and significant financial relief to many of these individuals.

$93,000 has been raised to assist Texans in the arduous task of rebuilding.

JOHN L. SANTIKOS CHARITABLE FOUNDATION A FUND OF THE SAN ANTONIO AREA FOUNDATION John L. Santikos was a visionary entrepreneur, businessman and real estate developer. He also had an incredible vision for giving back to his community. Mr. Santikos gifted the bulk of his estate to the San Antonio Area Foundation to establish his legacy by granting significant annual donations to various nonprofits and community agencies in eight Texas counties. The John L. Santikos Charitable Foundation has awarded more than $10 million to 171 charitable organizations. This total is part of the $22.9 million in community grants awarded from the Area Foundation in 2017. Note: All figures listed are before final audit.

THE BIG GIVE Area Foundation Partnership with The Nonprofit Council

Number of live releases, transports & return to owners due to funding

Number of births prevented by spay/neuter due to funding

Number of spay/neuter surgeries due to funding

SALSA Successfully Aging and Living in San Antonio is the Area Foundationâ&#x20AC;&#x2122;s latest initiative to create a community where seniors thrive and are appreciated as vital members of the community.

Our Mission ...â&#x20AC;&#x2030;helping donors achieve their charitable goals for the greater benefit of the community 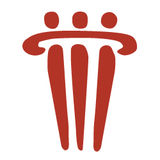