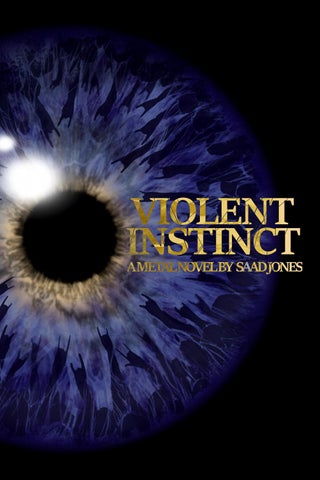 Available in English in 2019 on

I FEEL THE DARK Tilio does not understand, as he lies on the stage his long blond hair spreading on the floor. Never ever has one of his nightmares brought him that far… … to the taste of blood. The music stopped but his heart still beats, hardly lifting his chest. The weak organ slows down, halts, gets back in rhythm, and slows down again, emptying itself. His fingers are covered with a warm substance. His life leaks. He’s scared. A grunt welcomed him as he was running towards the front of the stage. The guitar and the bass were already roaring while the drums were hammering. Only his torn voice was missing, the audience desperate to hear his scream crowning the decibels storm. Tilio always likes the acrid smells of sweat, cigarettes and beer mixed together with the sugary flagrance of the theatrical smoke, the dark and suffocating atmosphere of Metal concerts where hairy crowds pack, move and play with the colourful curls created by the irrational lighting lamps. Each hall was unique, with its own acoustics and decor, but every time, Tilio was able to extract from it the vital energy allowing him to shout out his despair to the world. The thick leather skins audiences never disappointed him. The singer was to show them respect, and donate his vocal cords in response to the inestimable affection he had been receiving since his first shows in the gloomy basements of Soho London. With no fear, Tilio plunged into the loud mass, hoping that no breach would let the destructive tide floods the stage and submerges his frail tall body. As he was running to the edge of the stage, a wall of tattooed arms and devil horns erupted in front of him, with dozens of fans pressing the fragile crowd barrier like black waves trying to wipe out a rocky seawall and smash the front of stage staff.

The first detonation happened at the very moment he opened his mouth. Instantly, Tilio recognised the familiar blast of a gun, its deep powdery impetus followed by the whistling of a metal bullet slicing the air. Though, Tilio heard no impact. The bullet did not reach its target and its echo has diluted, leaving him with no chance of identifying the shooter. Immediately, the musicians stopped playing and left their notes fading away. The sharpest dived and ran away while others, distressed and immobile, still with their instruments in hands, were trying to understand what was happening. Screams started to spurt from everywhere, from the pit, from backstage and the back of the hall. A second detonation blasted in the air, and Tilio suddenly saw a hole expanding in the middle of the crowd moving like a shoal of fish trying to escape a predator. Standing at the centre of the hole was a man dressed in black, facing him, his legs slightly spread and his arms straight, positioned to shoot. He was staring at him intensively, his murky eyes pointing at him. Tilio could not elude his assassin. They observed each other and Tilio realised he was the target, the one that shall not leave this room alive. He remained paralysed, holding his breath for seconds that last minutes. He could not see the face of the gunman hidden under a large hood, but he recognised his silhouette. The black assassin was focused. --- THIS IS ALL YOUR FAULT! The third bullet slashed Tilioâ&#x20AC;&#x2122;s stomach. A soft impact echoed in his own body. The wave climbed to his neck and invaded his skull, pressuring his eyes in their sockets and congesting his nostrils. An invisible mass fall on his shoulders, breaking his legs. Then he collapsed. Tilio knows that his heart will stop in a few minutes. This is real. His head weighs tons. His body is numb. He suffocates, his rib cage constricted by obscure forces. A fever burns his skin. He must bend, bury himself down, curl up on the cold and hard floor. His ears ring but he can hear other shoots that resonate and beat in his brain. Around him, people scream and fight. He would like to yell for help, but he canâ&#x20AC;&#x2122;t. He still holds his microphone in his right hand, but as he manages to bring it

closer to his mouth, no air travels to his throat. His lungs seem flooded, drowning in blood. So much he desires to breathe, inhale air. He would like to bark or roar to empty himself before filling his body with the invisible gas of life, but he can only moan, in vain. Is it already the end? Did he breathe enough? Shout enough? Live enough? He remembers. His life was tormented, unfair, but shall it stop this way as he just opened a new page? A shadow comes closer. --- Tilio! Hold on! Hold on! We will take care of you now! Don’t worry! Hold on! A doctor’s coming… A DOCTOR FOR GOD SAKE! There is movement around him, he can feel it. Arms are lifting him, stretching his limbs and intensifying the pain as if he was torn apart. His fingers release the microphone that falls on the wooden floor and bangs loudly, bursting through the loudspeakers of the abandoned hall. Between his tired eyelids, he perceives shadows and lights as people carry him in endless corridors. The temperature drops suddenly: He’s out, removed from the moist heat of the hall, back outside to the cold where ambulance sirens are waiting for him. Metallic doors slam. Sirens are quieter but the light is stronger. There is less activity around him but he can feel moving. New shadows start talking to him, yelling incomprehensible words and intensively injecting fluids under his skins and inside his flesh. After a final jolt, Tilio calms down. The pain is fading away, leaving his body to gravity. His mind is free. He tries to breathe for the last time, in vain. Where’s Marie? \,,/

PRESS REVIEW Emaginarock.fr "The Author successfully managed to express Metal in his writing" Metal-Eyes.com « Saad Jones knows Metal like the back of his hand » TheMetalMag.com "Thanks to the author for having brought me into his story." W-Fenec.org « It is our turn, us the metalheads, from the inside of this ill appreciated community, to enjoy this novel» HornsUp.fr "All the elements for having good time are in this novel. The tension and the suspense do not fade away at any time" Sons-of-Metal.com « This novel smells the truth and pages run like Death Metal. » Hardforce.fr « A frenzy novel, full of sadness, self-sacrifice and abandon » COREandCO webzine « It would be a shame to miss this novel that, finally, shows Metal in the best light » French-Metal.com « A journey in the world of the Metalheads. You won’t regret it »