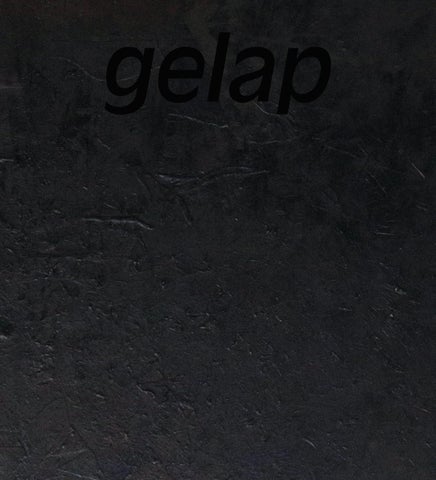 Gelap. An obsession with darkness? A sense of hopelessness? An intuition of self? Ajim Juxtaâ&#x20AC;&#x2122;s fourth solo exhibition arkologi: gelap, is an on-going and progressive questioning of the world we live in, and more importantly a reflection of an artistâ&#x20AC;&#x2122;s questioning of humanity and what it is that drives us. In developing arkologi: gelap, Ajim allows his thoughts the space to wander (wonder), constantly remembering our past, intuitively absorbing our current, and subtly accounting for our actions in contributing to future selves and the environments we create and destroy. His evolving narrative continues to warn us. With his 2014 Matikatak exhibition, he told us to listen to frogs, or rather reminded us that we have ceased to hear croaking frogs in our padangs, a sign that flora and fauna are rejecting our ways of building and living. Following, his 2016 Unknown Plus exhibition further drew out penghuni distopias, a mirror onto a future where we adopt and assimilate technology to achieve an optimum self. With arkologi: gelap, Ajim again propels and pushes us to see ahead. Perhaps in a plea for us to pause our daily existence and question our impulsive continuous chase to build, but not asking ourselves what are we giving up, or what are we giving back? In Tugu, we are presented with archetype monuments, or the monumentals, of which we already see around us. Clean architectural lines guide our recognition of structures, further tightened by painting and scraping of somber colours. With his instincts, creating a continued sense of foreboding; of closing in.

Seemingly meticulous and deliberate lines introduce us to Penghuni Distopia X and Y. A play of colour and hues, leaving us to fill in normative gender associations. As we continue to fuel progress with capital are we getting squeezed in? Still wanting more, perhaps in time we will build onto, into ourselves; making use of internal spaces of void. It did not take us a few days to get where we are. Layers of self-absorbed time; an accumulation of dense thoughts, a heavy mass of feelings and an intensity of wanting and taking. Perhaps we are self-aware, just not with sight. Gelap.

Sharmin Parameswaran is a part-time independent curator working in the Malaysian visual arts scene. Her interest is rooted in the potential of collaborative art initiatives to engage thought and discussions. Notable projects include a collaboration with womenâ&#x20AC;&#x2122;s rights group All Womenâ&#x20AC;&#x2122;s Action Society to stage The Good Malaysian Woman: Ethnicity, Religion, Politics 2014, and the acclaimed Obscura Photo Festival on a photo art exhibition titled Person(a) 2015. Her two most recent collaborations include working with seven Malaysian art collectives to co-curate and co-organise Collective | Individuals, a group exhibition for Urbanscapes 2017, and working with the multidisciplinary Cooler Lumpur Festival 2017 and Buku Fixi publishers to present The White Mask exhibition; a dystopian Malaysian cyberpunk story through the imagined visions of local visual artists.

About the Gallery As a gallery whose primary purpose is to promote young and emerging talent, it is a great pleasure for Artemis Art to present arkologi: gelap, Ajim Juxta’s fourth solo exhibition, a momentous port of call on our continuing journey with the artist. Artemis Art first became acquainted with Ajim’s art when he exhibited in the 2013 MEAA finalists’ showcase. Since then we have been following his progress, and in 2016 included him in our line-up for that year’s edition of Young Art Taipei. In addition, we nominated his work Arcology: Convergence for the 2016 Young Art Award, a core part of the annual art fair. Ajim emerged as one of the three winners, making him the first Malaysian visual artist to win the award, and earning the young artist a 3-month long residency at the Yeh Rong Jia Culture & Art Foundation in Hsinchu, Taiwan. To Ajim Juxta, congratulations on your hard earned and much deserved success thus far, and we hope that you enjoy continued success as a visual artist in years to come. Also, our thanks to Sharmin Parameswaran, someone whom the artist considers a friend and mentor, and who has graciously taken up the curatorial task for the exhibition. Finally, our heartfelt thanks to Mr. Bingley Sim for his continued support, and for being our guest of honour to officiate the exhibition.

Better known in the art scene as Ajim Juxta, Raja Azeem Idzham is a young multi-talented visual artist who found his calling in visual art, despite receiving his academic training in architecture. His repertoire of works spans several mediums, including pen and ink, found-object sculptures, and paintings on canvas. As an artist Ajim Juxta is not afraid to experiment with new media types, or explore new ways of using mediums he’s already adept at. Additionally, his training in architecture fuels his artworks; akin to organic blueprints created to make sense of a world seen as having gone wrong in many ways. Constantly analyzing, he is well known to be an artist who writes incessantly, filling notebook after notebook with sketches of possible ideas for future work, complete with lengthy side notes. Not unlike those you would find in design sketches made by idealistic artists and architects aiming to create their own magnum opus.