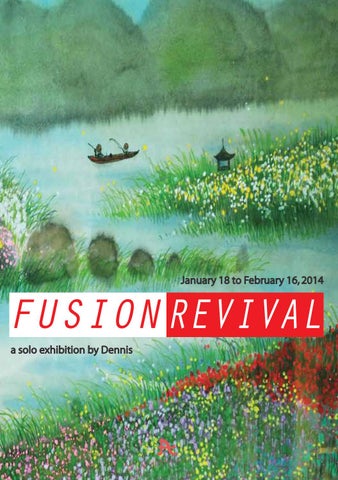 © 2014 Artemis Corporation Sdn Bhd All Rights Reserved No part of this publication may be reproduced, except for the purpose of research, criticism, and review, without first seeking written prior permission from the participating artist(s) and publisher.

A beautiful “Revival” to start the year with... ‘Outsider Art’ is a term that broadly categorizes art by artists who have not followed the conventional or traditional formal art education route. Artemis Art, since our inception, has been supportive of such artists, and in particular, artists with Learning Difficulties. It is therefore a great joy for us to be given the opportunity to present an artist as accomplished as Dennis Liew, who’s afflicted with Asperger’s, a type of Learning Difficulty. From a very young age, this artist already knew what he wanted out of life – to not just be an artist, but a famous one. Combining the techniques of Chinese ink and brush art with elements of the very European post-Impressionist pointillism, Dennis has arrived at a style that we think is quite distinct. He calls it “Fusion Revivalism”, a term coined by the artist himself, as far as we can tell, and which has contributed to the title for this exhibition, his debut solo outing. Covering a multitude of themes, Dennis presents to us his imagined utopia – a serene land that is rich with undisturbed flora and fauna, vibrantly alive with natural features whose magnificence would simply leave us in awe if such places existed. Most of all, Dennis’ artworks bring a certain calm to the viewer, which is what we felt when we first saw them. As Artemis Art’s first exhibition for 2014, this beautiful calm acts as a “revival” of sorts for the New Year. Like other young persons with Learning Difficulties whom we’ve worked with, we see Dennis first and foremost as an artist. His works articulate his inner feelings, translated through his brush strokes, similar to any artist. While the artist’s intention may have been to revive classical styles and presenting them in a more contemporary manner, something we think that Dennis has achieved, he has done much more than just that. Through this collection of artworks, Dennis Liew shows that he has what it takes to make his ambition come true, coupled with the hard work and perseverance that he has demonstrated coming this far. We take this opportunity to congratulate Dennis on his debut solo exhibition, and wish him all the success as he continues his endeavor towards one day becoming the famous artist he’s always dreamed to be. It’s been said that a journey of a thousand miles begins with a single step. And for Dennis, the journey of achieving his artistic dreams begins with this exhibition.

Preface Artists have been seeking inspirations from Mother Nature and interpreting their observations into works of arts since time immemorial. Young Dennis has a heart that is kind and true, which is reflected in his paintings of the wonderful worlds he envisions, that is the impression I have of him. His recent works show the hopes he holds dear and pours into the colorful sea of flowers, which leads us into a world of peaceful stillness and deep reflections of selves. He lets us see bliss, and he lets us smell the flowers. I wish Dennis all the very best in his artistic endeavors, and hope that society continues to support him.

Foreword to Dennis’ First Solo Exhibition Dennis has been looking forward to have his solo exhibition ever since he first started to be serious in art back in 2011. He is very passionate about his art, and is inspired by great artists like Vincent van Gogh, Paul Signac, Georges Seurat and Paul Cezanne. Dennis started doodling at the age of five without much encouragement from us. His class teacher in primary school told us that he could draw very well, observing from what he drew when not paying attention in class. His journey really began with doing ink and water colours on paper paintings by himself, after acquiring some basic skill from his art teacher, when he was twelve. He was at his happiest when painting. The turning point came when he surprised us with wanting to learn Chinese brush painting during the school holidays after his SPM examination. He picked it up very fast even though there was a communication barrier between him and his master. Dennis’ art sojourn went through a few turns because at the time, we felt pursuing art as a career was a no no. It was a fearful thought for us to imagine him painting professionally, knowing it is a difficult way of earning a living. But he persisted, expressing his desire to paint seriously. So in the end, we advised him that he should pursue his passion for art through graphic design. Dennis is an obedient and lovable person. He listened to our advice and went through with his formal education, even though it meant much pain and a lot of hard work, as a person with Asperger’s. The amazing thing is, he accepted the challenges because of his passion for art and his hunger for knowledge. He persevered, and completed his degree in Graphic Design in 2008. In 2011 he once again expressed his seriousness about wanting to be an artist. Not just an artist, but a famous artist. It had always been his dream. We impressed upon him that to do it seriously, he would need to paint everyday without fail. He has kept on doing this until today in his small studio, set up in one corner of the house. Indeed, he still is happiest when painting. Maybe that is the reason why his paintings exude feelings of peace and serenity to those viewing them. Dennis believes his artistic gift is from Almighty God. He starts each day with quiet time and prayers, and it is from this time of silent reflection that he gets his inspiration. His eagerness to learn knows no barriers, no matter how difficult it may be. This, plus his thirst for knowledge contributes to the thematic diversity of his works. Asperger’s has not become a hinderance, but instead manifests itself through the attention to detail in his works. It is my hope that you, too, will feel the peace and serenity in his works, as you view and enjoy the many expressions Dennis conveys in his paintings selected for this, his first solo exhibition. Patricia Lim December 2013

Fusion Revivalism is the use of visual styles that consciously echo the styles of previous art movements, and that has a mixture of both traditional and contemporary modern art

In the context of Post-Impressionist styles, I am inspired by Pointillism, a technique of painting where pure primal colours are applied in patterns, as small distinct dots, or points, to form an image. According to art historians, Georges Seurat and Paul Signac developed this technique in the mid-1880s, and is a technique that is generally considered a branch-off from Impressionism. Although the term Pointillism was first coined by art critics in the late 1880s to ridicule these artists’ works, it is today used without its original insulting intent. This technique is also sometimes referred to as Neo-Impressionism and Divisionism. Pointillism uses the ability of the human vision system – the eye and the brain – to virtually “blend” these dots, visually creating a fuller range of tones. This painting technique is applied at the expense of the traditional use of brushwork to create contours, contrasts and textures. I apply this technique to Chinese brush painting to give it a new perspective. Merging it the Western Post-Impressionist Pointillism style adds colours and vibrancy to the traditional black and white ink painting. Fusion Revival is my attempt at combining different classical styles, producing something new in the process. At the same time, I am reviving techniques from great 19th century Western Post-Impressionist artists, such as Georges Seurat, Paul Signac, Vincent van Gogh, Paul Cezanne, and Paul Gauguin, all of whom have inspired me.

Dennis has Asperger Syndrome, a high functioning autism disorder. He started to doodle and paint when he was five years old. Although his aptitude for painting was obvious, it was impressed on him that he needed a formal education. Thus, he pursued a degree course in graphic design. Upon completing his degree, he worked for two years as a graphic designer, after which he decided to be an artist full time. He paints in his small studio at home, and is very passionate about his painting, loving every moment of it. Dennis currently works primarily with two mediums: Chinese ink and watercolour on paper, as well as acrylic on canvas. Apart from painting, his other interests include photography and singing.

This catalog commemorates Fusion Revival, a solo exhibition by Dennis Liew. Artemis Art would like to express our heartfelt gratitude to the artist and to his mother, Patricia Lim, whose generous assistance has been invaluable in making this exhibition and publication possible. Thanks also goes to Mr. Stevie Chan for assisting with the translation, and last but not least our heartfelt gratitude to Mr. Chong Buck Tee for agreeing to officially open the exhibition. Some of the information presented in this catalog, particularly that which relates to classical art styles and artists, has been derived from open source Internet references (such as Wikipedia).