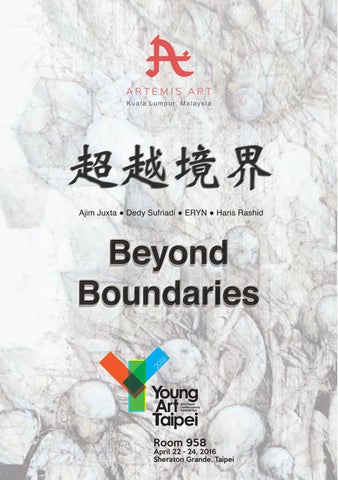 b. 1983 in Kuala Lumpur, Malaysia Better known in the art scene as Ajim Juxta, Raja Azeem Izham is a young multi-talented visual artist who’s found his true calling in art, despite formally receiving his academic training in Architecture. His repertoire of works spans several mediums, including pen and ink, found-object sculptures, and paintings on canvas. As an artist Ajim Juxta is not afraid to experiment with new media types, or explore new ways of using mediums he’s already adept at. The training he had in architecture, however, has not gone to waste. This young artist’s artworks are akin to organic blueprints created to make sense of a world seen as having gone wrong in many ways. Young Art Taipei 2016 marks a major milestone in this young artist’s career, having been short-listed for this year’s Young Art Award, his first appearance in an art fair outside of Malaysia.

Dedy Sufriadi b. 1976 in Palembang, Indonesia

Dedy Sufriadi is the first place winner of the 2015 Young Art Award and returns once again this year to Young Art Taipei. Well-known as a very active artist in the Indonesian contemporary art scene, to date he has had ten solo exhibitions, and participated in numerous group exhibitions both domestically in Indonesia and on the international stage. Apart from his works from the “Burning Series”, this time around we present a sampling of the artist’s other visual styles within the broad abstract spectrum that Dedy is known for, including his text-based artworks. Dedy frequently experiments with new physical mediums to create artworks with, in his quest to constantly renew himself and finding fresh ways to present his works.

ERYN, the name young visual artist Winnie Cheng is better known as, is Malaysia’s 2015 UOB Art Award Gold Medal Winner in the Emerging Artist category. The fantastical worlds she imagines become the backdrop for her layered paper-cut works, exploring various themes and stories conjured by this artist’s creative mind. Inspired by fantasy literature the artist has been fond of since childhood, the lush alternate reality settings, created from a combination of mediums utilizing various papercutting techniques, provide the viewer the opportunity to briefly escape the real world, and contemplate the themes of selfdiscovery frequently presented in ERYN’s artworks.

Haris Rashid b. 1992 in Kedah, Malaysia The illustration background that Haris Rashid comes from gives rise to an interesting visual style that has progressed to become both bold and calculated at the same time. This young artist is currently busy preparing for his second solo exhibition, scheduled for later this year, and the wildlife works presented at this yearâ&#x20AC;&#x2122;s YAT is a sampling of the advancement in the visual style he has been working on since his debut solo with Artemis Art last year.