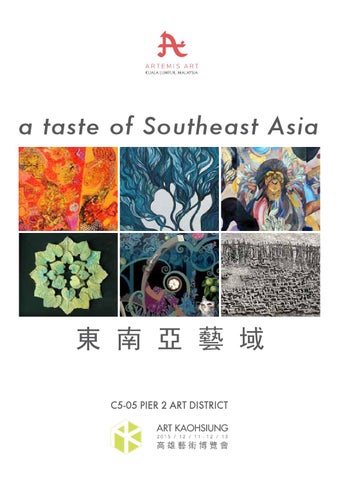 a taste of Southeast Asia

Dedy Sufriadi has been very active in the Indonesian contemporary art scene, and has to date had ten solo exhibitions, in addition to

Dedy Sufriadi b. 1976 in Palembang, Indonesia

First Prize winner of the Young Art Award, at Young Art Taipei 2015. Despite the growing success in his career, this artist is very involved with many community projects and helps out young artists within his community in Yogyakarta, Indonesia.

Christine Das b. 1966 in Penang, Malaysia

Penang-born Christine Das has a very strong spiritual connection with nature, the primary focus of her current body of work. Inspired by the Biblical parable of the mustard seed (Luke 13:8), the “Perched” series of works aims to highlight just how important trees are and how central they are to the balance of nature. Each tree supports a myriad of life forms, something we seldom realize, until we take a closer look. Without trees, nature itself would be thrown off balance.

How human characteristics manifest themselves in the world of animals

Japanese maxim, now ubiquitously known the world over as “see no evil, hear no evil, speak no evil”, becomes the inspirational backdrop for his “Three Wise Monkeys”. In addition to focusing on his own art, Haris Rashid leads Studio Mekar, a young artist collective in Kuala Lumpur, where he currently resides.

Trained as a sculptor, Jasmine Kok is an emerging multi-modal artist adept at many mediums. In the series of ceramic works exhibited, the regular patterns of lines and textures on leaves become the basis of her obsessive exploration into the ephemeral nature of the objects and things that surround us. Jasmine, in this series of works, recreates what she observes in nature, and in the process, makes permanent what would otherwise be something impermanent.

An accomplished visual artist in many respects, Mastura Abdul

having been active for three decades. “Late Night” is a series of husband, a sculptor and writer, who is currently convalescing from a stroke. Inevitably what they usually end up talking about revolve around his recovery, and continued rehabilitation.

woodcut and lithographic prints exhibit the attention to detail that the artist possesses. Her artworks have garnered her several awards, and have been collected by the Vietnam Fine Art Museum, as well as by many international collectors. Her “Four Seasons” series of prints are her response to the change in seasons, the passage of time

Ever since our inception in 2011, our primary focus has been on the promotion of art by young and emerging artists from the Southeast Asia region. Our debut participation in Art Kaohsiung this year presents six artists from Indonesia, Malaysia, and Vietnam.

A Taste of Southeast Asia

A Taste of Southeast Asia