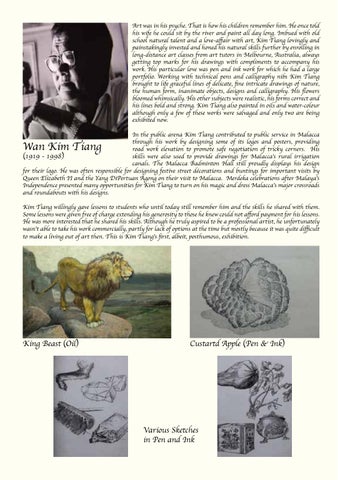 Art was in his psyche. That is how his children remember him. He once told his wife he could sit by the river and paint all day long. Imbued with old painstakingly invested and honed his natural skills further by enrolling in long-distance art classes from art tutors in Melbourne, Australia, always getting top marks for his drawings with compliments to accompany his work. His particular love was pen and ink work for which he had a large portfolio. Working with technical pens and calligraphy nibs Kim Tiang bloomed whimsically. His other subjects were realistic, his forms correct and his lines bold and strong. Kim Tiang also painted in oils and water-colour although only a few of these works were salvaged and only two are being exhibited now. In the public arena Kim Tiang contributed to public service in Malacca through his work by designing some of its logos and posters, providing road work elevation to promote safe negotiation of tricky corners. His (1919 - 1998) skills were also used to provide drawings for Malacca’s rural irrigation canals. The Malacca Badminton Hall still proudly displays his design for their logo. He was often responsible for designing festive street décorations and buntings for important visits by Queen Elizabeth II and the Yang DiPertuan Agong on their visit to Malacca. Merdeka celebrations after Malaya’s Independence presented many opportunities for Kim Tiang to turn on his magic and dress Malacca’s major crossroads and roundabouts with his designs.

Kim Tiang willingly gave lessons to students who until today still remember him and the skills he shared with them. He was more interested that he shared his skills. Although he truly aspired to be a professional artist, he unfortunately

Various Sketches in Pen and Ink

It's often said that talents run in the family, and this is certainly true of the father, daughter and grandson artists featured in this uni...

It's often said that talents run in the family, and this is certainly true of the father, daughter and grandson artists featured in this uni...