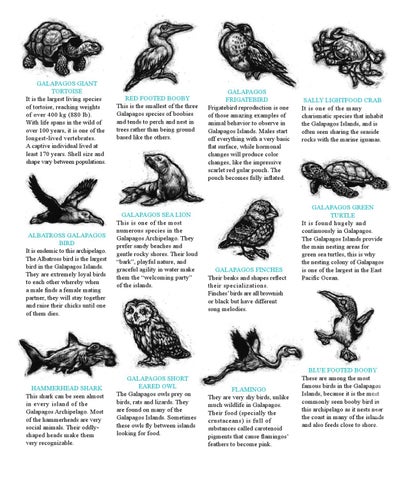 ALBATROSS GALAPAGOS BIRD It is endemic to this archipelago. The Albatross bird is the largest bird in the Galapagos Islands. They are extremely loyal birds to each other whereby when a male finds a female mating partner, they will stay together and raise their chicks until one of them dies.

HAMMERHEAD SHARK This shark can be seen almost in every island of the Galapagos Archipelago. Most of the hammerheads are very social animals. Their oddlyshaped heads make them very recognizable.

RED FOOTED BOOBY This is the smallest of the three Galapagos species of boobies and tends to perch and nest in trees rather than being ground based like the others.

GALAPAGOS SEA LION This is one of the most numerous species in the Galapagos Archipelago. They prefer sandy beaches and gentle rocky shores. Their loud “bark”, playful nature, and graceful agility in water make them the “welcoming party” of the islands.

GALAPAGOS SHORT EARED OWL The Galapagos owls prey on birds, rats and lizards. They are found on many of the Galapagos Islands. Sometimes these owls fly between islands looking for food.

GALAPAGOS FRIGATEBIRD Frigatebird reproduction is one of those amazing examples of animal behavior to observe in Galapagos Islands. Males start off everything with a very basic flat surface, while hormonal changes will produce color changes, like the impressive scarlet red gular pouch. The pouch becomes fully inflated.

GALAPAGOS FINCHES Their beaks and shapes reflect their specializations. Finches’ birds are all brownish or black but have different song melodies.

FLAMINGO They are very shy birds, unlike much wildlife in Galapagos. Their food (specially the crustaceans) is full of substances called carotenoid pigments that cause flamingos’ feathers to become pink.

SALLY LIGHTFOOD CRAB It is one of the many charismatic species that inhabit the Galapagos Islands, and is often seen sharing the seaside rocks with the marine iguanas.

GALAPAGOS GREEN TURTLE It is found hugely and continuously in Galapagos. The Galapagos Islands provide the main nesting areas for green sea turtles, this is why the nesting colony of Galapagos is one of the largest in the East Pacific Ocean.

GALAPAGOS GIANT TORTOISE It is the largest living species of tortoise, reaching weights of over 400 kg (880 lb). With life spans in the wild of over 100 years, it is one of the longest-lived vertebrates. A captive individual lived at least 170 years. Shell size and shape vary between populations.

BLUE FOOTED BOOBY These are among the most famous birds in the Galapagos Islands, because it is the most commonly seen booby bird in this archipelago as it nests near the coast in many of the islands and also feeds close to shore.

Who is he? Where does he live? What makes him so special? Find out in this picture book about a wonderful place and its most famous inhabitant.