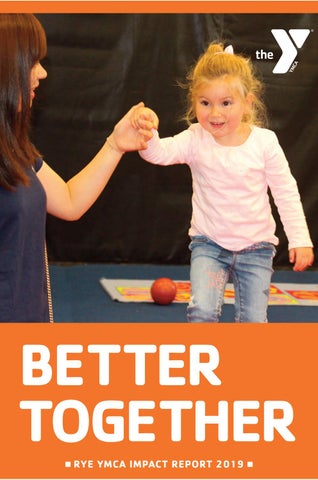 OUR MISSION The Rye YMCA is a family-oriented community service organization which welcomes all people and promotes positive values through programs that build spirit, mind and body. n

LOOKING BACKâ&amp;#x20AC;ŚAND LOOKING FORWARD Dear Friends, We are pleased to share our 2019 Impact Report, which highlights just a few of the programs and activities that make the Rye Y so special. Flip through these pages and youâ&amp;#x20AC;&amp;#x2122;ll see our mission in action, from new classes for seniors, teens and families to social responsibility initiatives that made a difference outside our walls. This year, our report is tinged with poignancy. We look back on 2019 from a much-changed landscape. Our beloved Y is temporarily closed due to the pandemic and when we re-open, will look different, at least for the short-term. Despite these challenges, we look back with great pride and forward with abundant hope. Thanks to the dedication of our staff and volunteers, the loyalty of our members, and support of our donors, we will emerge from this crisis strong and ready to serve. We will build on the accomplishments of 2019 and the 100+ years that came before. And we will be here, always, for our community. Thank you for being part of the Rye Y family. We look forward to seeing you again soon. Sincerely,

â&amp;#x20AC;&amp;#x153;I love that the Y works hard to create a strong sense of belonging for EVERYONE, regardless of income, background, race, etc. It seems everyone is important here.â&amp;#x20AC;? - Comment from a Rye Y Member n

YOUTH DEVELOPMENT We believe that all kids deserve the opportunity to discover who they are and what they can achieve. “My daughter is so comfortable at the Y and looks forward to being there. She is getting to know other children in the community (not just from Harrison) and meeting others through camp, gymnastics, swimming and ASA. I think the Y gives her confidence and she always leaves happy. I am also happy that she is able to have…role models from a variety of backgrounds. She is also making friends with older kids, which I think is great for her development.” – Comment from a Rye Y Member

IMPACT: YOUTH DEVELOPMENT Safety Around Water is a free Rye Y drowning prevention initiative that gives young children the skills and confidence to stay safe in and around water. In August 2019, we were delighted to partner with Port Chester’s Don Bosco Community Center to bring ten families to the Y for Safety Around Water. Our certified instructors taught important water safety skills to these young children and their parents.

“My daughter learned new and important tips about water safety. She learned how to call 911 and how to help others in case of a water emergency. It was great!” – Sandra

HEALTHY LIVING The Rye Y is a leader for health and well-being, bringing families closer together; encouraging good health; and fostering connections through fitness, sports, community service and shared interests. “Our counselors are great role models for the kids enrolled in the Rye Y’s Teen Fitness Camp. They give each teen individual attention, helping them grow stronger, healthier and more confident. Most importantly, our counselors give the teens the skills to maintain a healthy lifestyle long after camp has ended.” – Diana Vita, Senior Director of Member Wellness

IMPACT: HEALTHY LIVING The Rye Y has a soft spot for our members who are Active Older Adults and want to see them lead their healthiest lives. Thatâ&amp;#x20AC;&amp;#x2122;s why we offered more opportunities for fitness, strength, and social connections in 2019 than ever before. From Aquajog to Pickleball, Basic Training to Tai Chi, with rounds of Canasta and Mah Jongg thrown in for fun, Rye Y seniors can find an activity for almost any interest. And every year we host Senior Health and Fitness Day (shown below) and Fall Prevention Day. Both of these popular events are free and open to the community.

SOCIAL RESPONSIBILITY From the financial assistance that keeps the Y affordable for all, to the initiatives that foster stronger communities, the spirit of social responsibility infuses every aspect of our cause-driven work.

“We were excited when General Atlantic reached out to the Y about partnering on a bike building project. Their commitment to social responsibility is a perfect fit with the Y’s. General Atlantic employees assembled 30 bicycles, which were donated to families who receive financial assistance through our Y Cares program. The company also donated drawstring bags filled with camp supplies and a generous cash contribution for camp scholarships. We had a lot of happy families last summer!” – Rye Y Executive Director Gregg Howells (shown above with Rye Y COO Randal Ikeda) n

IMPACT: SOCIAL RESPONSIBILITY It was standing room only for the Rye Yâ&amp;#x20AC;&amp;#x2122;s Green Schools, Green Futures conference on environmental initiatives in schools last March. Offered free of charge, the event drew 120 teachers, administrators, environmental leaders, students, and parent volunteers, who filled the carriage house at Jay Heritage Center for panel discussions on Zero Waste, School Gardens, and Teaching Sustainability. Mamaroneck Avenue School fifth graders Nola Coady and Ella Apfaltrer (shown below) kicked off the conference with remarks about their efforts to reduce and recycle waste in their school.

New Racquet Sport Our adult members loved Pickleball when we introduced it in 2018, so it was a no-brainer to start a weekly Intro to Pickleball class. In the fall, we added an Intermediate class for those who wanted to step up their game.

FOR A BETTER US n

The proceeds from Rye Y events support our Y Cares Financial Assistance program, which helps us keep our programs and services accessible to all. For a complete list of Rye Y donors, visit ryeymca.org/donors. n

HONORING THE PEOPLE WHO MADE AN IMPACT

The Rye Y is a 501(c)(3) nonprofit charitable organization

We are so grateful for the generosity of our donors. Please know that every effort was made to ensure the accuracy of this list. If your name was inadvertently omitted, please accept our apology and let us know so we can update our records. You may contact Susan Olson, Development Director, at susanolson@ryeymca.org with any updates. 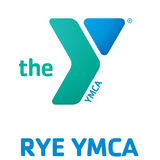