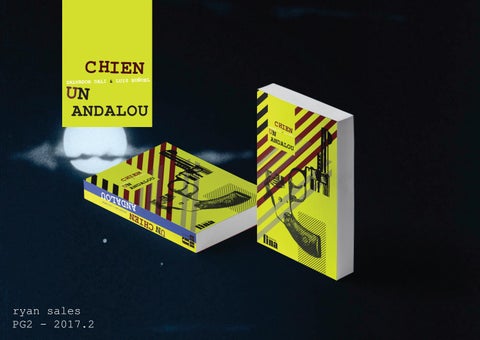 P R E F A CE ONCE UPON A TIME A balcony at night. A man is sharpening a razor by the balcony. The man looks at the sky through the window-panes and sees ... A light cloud moving toward the full moon. Then a young womanâ&#x20AC;&#x2122;s head, her eyes wide open. A razor blade moves toward one of the eyes. The light cloud passes now across the moon. The razor blade cuts through the eye of the young woman, slicing it. End of Prologue.

EIGHT YEARS LATER A deserted street. It is raining. A character dressed in a dark-gray suit appears riding a bicycle. His head, back and loins are adorned in ruffles of white linen. A rectangular box with black and white diagonal stripes is secured to his chest by straps. The character pedals mechanically without holding the handlebars, with his hands resting on his knees. The character is seen from the back down to the thighs in a medium shot, superimposed dress is sitting in the middle of the room attentively reading a book. Suddenly she comes out of her reading with a start, listens with curiosity, freeing herself of the book by throwing it on a nearby couch. The book stays open with a reproduction of Vermeerâ&#x20AC;&#x2122;s The Lacemaker on one of the pages facing 2

up. The young woman is convinced now that something is in the offing: she, gets up, and, half turning, walks in quick steps toward the window. The character we have mentioned before has just at this very moment stopped, below on the street. Without offering the least resistance, out of inertia, he lets himself come down with the bicycle into the gutter, in the midst of a mud heap. Looking enraged and resentful, the young woman hurries down the stairs and out to the street. Close-up of the character sprawling on the ground, expressionless, his position identical to that at the moment of his fall. The young woman comes out of the house, and, throwing herself on the cyclist, she frantically kisses him on the mouth, the eyes and the nose. The rain gets heavier to the extent of blotting out the preceding scene. Dissolve to the box whose diagonal stripes are superimposed on those of the rain. Hands equipped with a little key open the box, pulling out a tie wrapped in tissue paper. It must be taken into account that the rain, the box, the tissue paper and the tie should all exhibit these diagonal stripes, with their sizes alone varying. The same room. Standing by the bed, the young woman is looking at the clothing articles that had been worn by the character -- ruffles, box, and 3

up the hand which he carefully wraps up and puts in the box that was carried by the cyclist. He hands it all to the young woman, saluting her in a military fashion while she thanks him. As the policeman hands her the box, she must appear to be carried away by an extraordinary emotion that isolates her completely from everything around her. It is as though she were enthralled by the echoes of distant religious music; perhaps music she heard in her earliest childhood. Their curiosity satisfied, the bystanders begin to disperse in all directions. This scene will have been seen by the characters whom we have left in the room on the third floor. They are seen through the window panes of the balcony from which may be seen the end of the scene described above. When the policeman hands the box over to the young woman, the two characters on the balcony appear to also be overcome to the point of tears by the same emotion. Their heads sway as though following the rhythm of this impalpable music. The man looks at the young woman and makes a gesture as though he were saying: “Did you see? Hadn’t I told you so?” She looks down again at the young woman on the street who is now all alone and, as if pinned down to the spot, in a state of utter restraint. Cars pass all around her at breathtaking speeds. Suddenly she is run over by one of the cars and is left there horribly mutilated. It is then that, with the decisiveness of a man fully knowing his rights, the man goes over to his companion, and, having gazed lasciviously straight into her eyes, he grabs her breasts through her dress. Closeup of 6

the lustful hands over the breasts. These are bared as the dress disappears. A terrible expression of almost mortal anguish spreads over the man’s face, and a blood-streaked dribble runs out of his mouth dripping on the young woman’s bare breasts. The breasts disappear to be transformed into thighs which the man continues to palpate. His expression has changed. His eyes sparkle with malice and lust. His wide open mouth now closes down as if tightened up by a sphincter. The young woman moves back toward the middle of the room, followed by the man who is still in the same posture. Suddenly, she makes a forceful motion, breaking his hold on her, freeing herself from his amorous advances. The man’s mouth tightens with anger. She realizes that a disagreeable or violent scene is about to take place. She moves back, step by step, until she reaches the corner of the room, where she takes up a position behind a small table. Assuming the gestures of the melodrama villain, the man looks around for something or other. He sees at his feet the end of a rope and picks it up with his right hand. His left hand gropes about too and gets hold of an identical rope. Glued to the wall the young woman watches with horror her attacker’s stratagem. The latter advances toward her dragging with great effort that which is attached behind to the ropes. We see passing before our eyes on the screen: first, a cork, then a melon, then two Brothers of Christian Schools, and finally two magnificent grand pianos. The pianos are loaded with the rotting carcasses of two donkeys, their feet, tails, hindquarters and excrement spilling 7 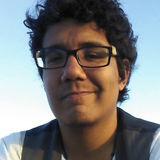