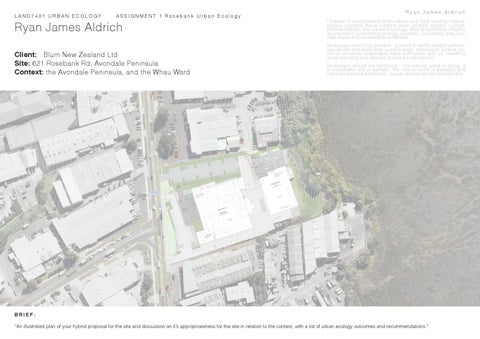 Ryan James Aldrich I beleve in environments both urban and rural hosting natural, organic systems. these systems clean, protect, sustain, nurture, provide habitat, and connect ecology. they should have integrity as important functioning ecology systems; secondary they provide visual and recreational amenities. landscape should be present. a world in which people witness, appreciate and know their surroundings. ephemeral, forever, micro or universal landscapes have interaction with us. therefore understanding and respect should be convention. landscape should be functional. the natural word is living. it is purposeful and pragmatic. the natural world is beautiful and complex beyond aesthetics. design should aim to maintain this.

BRIEF: “An illustrated plan of your hybrid proposal for the site and discussion on it’s appropriateness for the site in relation to the context, with a list of urban ecology outcomes and recommendations.”

Blum New Zealand has a site located on 612 Rosebank Road, Avondale Peninsula, Auckland, New Zealand. An urban ecology study of the site has been undertaken and has been used to generate information to inform and guide the suggested design moves. Urban ecology encompasses systems and interactions. It has no boundaries. Therefor the Blum New Zealand site cannot be solely investigated, or viewed. The ecological condition and functions of and across Avondale form a suitable base context to design exploration and moves.

The site is located in Rosebank or on the Rosebank peninsula which extends out from Henderson into the Waitemata harbour. The Te Atatu peninsula situated to the west is separated from Rosebank by the Whau river. Topography of the site is generally flat and level until the ground slopes steeply down to the water. The area features underling soils of Pumiceous mud, sand and gravel with black muddy peat and lignite. The site has a history prior to industry as being predominantly agricultural and horticultural. This past land use may be responsible for contaminates. DDT components are present in the soils of some areas of the site at low concentrations. (Pattle Delamore Partners, 2010). The Rosebank site has an industrial and commercial surrounding. It is situated in a highly disturbed area where impervious concrete dominates. The site is boarded by large buildings and the Avondale Peninsula.

V E G E TAT I O N Rosebank Peninsula has a mix of vegetation found amongst and bordering the industrial, and commercial matrix from native to exotic, naturalised to planted. The main forms of vegetation in the Rosebank area are street trees, some amenity planting and the occasional unique patches of vegetation. The most dominate forms of vegetation are the mangrove covered shoreline and the scruffy mixed exotic and native boundary edges between the industrial lots and the mangroves. Although this land is council ownd it directly efects the Blum New Zealand site, and any design moves should also incorporate the costal fring.

There have been innumerable impacts to the land and water on and surrounding the Blum New Zealand site. Vegetation has been cleared. The main area of vegitation grows on land that has had rubbish dumped mixed with soil to claim more land as it slopes into the peninsular. This area of the site is highly disturbed. A fundamental component of any design move would be to address this area and its issues.

â&#x20AC;&#x153;The edges are a mix of primarily naturalised exotics and natives and have the most ecological value from a traditional perspective in the peninsula. However the quantity of exotic species that have invasive weed status is high and greatly reduce their beneficial impacts. They can provide habitat for certain fauna but there are superior options that work better in this environment. Re vegetation is starting to happen along some of the edges and although many of the plant choices are suitable for the environment, there are some that may not be successful or suitable for the location despite being natives.â&#x20AC;? (Lunberry, G. (2011). Site and Context Analysis - Vegetation. Auckland.)

FOOD PRODUCTION Blum is a cabinetry producing company. They create kitchens at the Rosebank Site. During consultation Blum described the environment they wanted to create in the showroom. They planed to host lunch and diner functions for potential customers and that food would be prepared on site. To compliment this idea food producing plants could be incorporated into design moves. Avondale also has agricultural history that can be referenced, and staff could enjoy the produce.

I M P E RV I O U S S U R FA C E S The Rosebank area is highly developed. It is mostly industrial and commercial property. The main from of transport is by personal car, secondary is the public transport system of busses. As a result of this urban form there are large areas of impervious surfaces. Concrete is dominant. This is damaging to the environment as large amounts of storm water runs off into water bodies untreated and containing pollutants. Storm water increases additionally put pressure on water systems as increased flow rates effect erosion.

C O S TA L W A L K W AY Near to the Blum site a costal walkway has been created running along the costal fringe of the industrial lots. It features loosely defined public and private boundaries. It provides amenity value for staff and community. Having access to and long the water socially desired and valued as important. Currently there is no public walkway or access to or along the cost at the front of the Blum site.

The new architectural arraignment of the site places a driveway and carpark access running from Rosebank road directly to the main entrances of the Blum showroom. This driveway and carpark increases the amount of impervious surface on the site. The formal axis and parking arraignment designed by the architects should function well and be aesthetically pleasing. However it is an opportunity to incorporate urban ecology into the design. Instead of the proposed gardens being simple ornamental or aesthetic, they should function ecologically. The gardens should be green infrastructure. Rain gardens could be installed between and around the car park spaces. Rain gardens are sunken areas or depression covered with vegetation. They aim to capture and hold and absorb storm water from impervious surfaces. Rain water will run from the car parks on the Blum site into the rain gardens and soak into the ground. Rain gardens reduce erosion, water pollution and flooding while being aesthetically pleasing alternative to conventional drains that do not offer these functions. With the introduction of flora instead of impervious surfaces there is reduced heat build up from solar radiation. Habitat and food sources are also created for certain species.

Curently the Blum site has little to no vegitation. imiditly adjasent to the site is the council ownd costal fringe. the costal fringe is a sruffy mixed of exotic and native plants growing on land coverd in dumped rubish and fill soil. the Blum show room has is designd to take advantage of the costal views. the view shaft runs directly through / over the costal fringe area. for this reason it is recomomented that Blum relandscape this area of council ownd land. specific flura can be retained such as the signifigant pohutakawa trees which can be finded to maintain views over the water. the rubish exsiting in this area should be removed and desposed of corectly. the bank should be replanted in native species that can be selected for there asethetic value. exotics can also be incorporated beside natives to achive a desired aesthetic. By re-vegitating the costal fringe with natives habitat and conectiverty across the landscape is increased. having plants growing on the steep banks prevents errosion. certain plants will also act to filter storm water befor it reaches the Waitemata harbour.

With a re-vegetated costal fringe the visual aesthetics of the Blum site will be increased. Visually it will be an attractive area. However access should be provided through and to this area so it can be enjoyed by Blum staff and the public. An axis should be created running along the costal border. Near to the Blum site a costal walkway has been created running along the coastal fringe of the industrial lots. It features loosely defined public and private boundaries. By incorporating a costal axis future the implementation of a full costal track is easier and more likely to be realised. There are different forms this path could take such as an elevated board walk, paved path, or gravel track.

This type of access facilitates social interaction at and with the site. It also acts as a cue for care. It shows people the importance and relevance of a re-vegetation project, and the aesthetic beauty of New Zealand coast fringe environments that my otherwise be unnoticed.

Food producing plants should be incorporated into planting plans to be located near or immediately beside the showroom. Plants chosen to be placed near the show room should be considered for there ability to produce food. Having food producing plants references the agricultural history of Avondale. However more importantly produce can be consumed by staff and visiting public. Preference is mostly for low maintenance tree and shrub like plants which could range from a herbs such rosemary hedge to lemon trees. These food producing plants can be incorporated into design to be visually appealing.

Customers attending lunch and diner functions at the show room can be presented with food that is prepared on site, with some items grown on site. Staff will also be able to take home produce. The companies and the staffs carbon footprint is reduced. This is a this is a sustainable practise. An illustrated plan of a hybrid proposal for the Blum site on the Avondale Peninsula, New Zealand. Urban ecology recomendations are listed

An illustrated plan of a hybrid proposal for the Blum site on the Avondale Peninsula, New Zealand. Urban ecology recomendations are listed