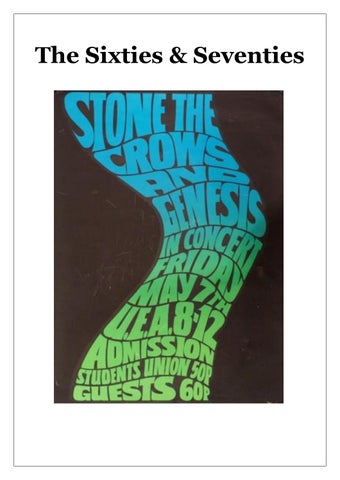 In the beginning………. In October 1963 the University of East Anglia was established and opened to 150 students all based in the Village. Their social life was focused around a film on Sunday night and a dance on Saturdays, which many Norwich folk attended, the events took place in the Assembly Hall in The Village with a late bar closing at 10.30pm 22 Feb 66

1967 There were lots of social events, as well as ballroom dancing, classical music society and the weekly Gramophone club meeting, the bigger events were organised by Jazz Club, Folk Club, RAG (Charity fund raising), or the Social Committee of the SU, all staging local and national performers on a regular basis. Student band Rhumhound in rehearsal. (Mel Bray)

East Of Eden The Yetties Al Stewart The Who Quintessence

+ Comus + Writing On The Wall + Siege

1971 Events were held on the Village site in the Assembly Hall, the Lower Common Room or the Barn, some of the big events were held in City Centre venues, the Lads Club (King Street), the Melody Rooms (Oak Street), St Andrews Hall, the Jacquard Club (Magdalen St), G Block in the Student residences at Horsham (fifers lane) and various festivals were in Earlham Park. The main Campus was well underway, the broad was supplying the gravel for the concrete and the teaching wall was nearly finished, breezeblock by breezeblock, ziggurat by ziggurat the campus grew. 1970-1971

There were other venues popular with students in the City. The Melody Rooms had Status Quo on 18th Nov and Mungo Jerry on 3rd Nov and Hawkwind on 21st Nov in St Andrews Hall

The Alex Harvey Band in Village

Horsham Halls 600 first year students lived off campus on a former RAF base north of the city (near the airport) called Horsham on Fifers Lane. Students lived in 2 storey H Blocks,had cooked breakfast provided, before queueing for a really poor bus service to campus (Last bus home was before midnight). There were recreation facilities in B and G block which included a small bar, a cellar and basic function rooms. In the late 70s one of the H blocks was converted to a social area with a coffee bar and a badminton hall which doubled as a disco hall, gig venue and cinema ( In this giglist such events are referenced as K Block) To share memories with old Fifers friends https://www.facebook.com/groups/2649755609

On the central campus, the Catering Block, the Street and University House all suffered delays in their construction. The Pub and a burger bar in the lower floor of UH opened first, the Pub pulled its first pint at noon on Monday 4th Dec 72. 08 Dec 72 12 Dec 72

14th March 1973, the building of University House finished and the Main Hall came into use. However due to no equipment being installed, the bar was only 3m long, there weren’t enough toilets, University staffing costs were huge and there were lots of restrictions on the licence, so events continued across other rooms and halls mostly in the village or Horsham where the refurbishment of K Block offered a new sport/function hall. 21 Mar 73 Spirit + Average White Band + Cat Iron melody rooms 50p 28 Mar 73 Pretty Things assembly hall 50p 30 Mar 73 Richard Thompson + Linda Peters folk club The first gigs in the ‘New Hall’ later billed as the ‘Main Hall’…… then became the Large Common Room, the LCR. 05 May 73 06 May 73 08 May 73 18 May 73 21 May 73 29 May 73 05 Jun 73 24 Jun 73 27 Jun 73

The LCR had a new system of moveable stage blocks and extra plug sockets installed as the latest acts were now bringing more coloured, flashing lights with them. The LCR bar was fitted out for functions and the student staff were paid 56p an hour. A UK student got an annual grant of £605 to pay for term time living expenses, while a room in Norfolk Terrace cost about £4.14 a week to rent. ?? Oct 75 08 Oct 75 11 Oct 75 14 Oct 75 18 Oct 75 22 Oct 75 29 Oct 75

Sex Pistols + The Damned + The Heartbreakers + The Clash

+ Eddie and the Hot Rods folk club + Doctors of Madness

CANCELLED by University following the infamous Bill Grundy interview with the Sex Pistols swearing on national TV the day before, the national press and academia went wild. The cancellation costs nearly bankrupted the Students Union.

In Dec 77 an Entertainments report was made to Students council stating that Ents had made a surplus of £300 this term, that Folk club was in decline, but the Jazz club remained very popular. They also debated whether to allow any bookings for the new trend of ‘punk bands’, Their conclusion… ‘There would be a need for extra stewards to stop the audience encroaching on the stage’. Squeeze , 1978 Jools Holland on Piano

13 Jun Ian Dury and the Blockheads £4 Ian Dury &amp; the Blockheads was the first time a band came with an articulated lorry full of equipment and required three-phase power (not just 13 Amp sockets). This involved disconnecting the pottery kiln upstairs in Union House and cabling through the floor. 19 Jun

1979 Industrial disputes by University Porters who unlocked and provided security for the building led to the cancellation of gigs by Magazine, XTC and Richard Thompson in Jan. 09 Feb 22 Feb

1979 06 Jun Fischer Z + the Clynics at K Block 80p 8/9/10 Jun The ‘Free Festival’ Weekend Friday : Pinpoint + High Heels in K Block Saturday in the Square: the Pirates + Capitalist Music. LCR: Ronnie Scott Quartet Sunday in the LCR: the Smirks + China Street One of Nick’s earliest regrets was he turned down the offer of ‘the Police’ to play in the square and instead confirmed the rhythm and blues combo ‘the Pirates’… faux pas 15 Jun 20 Jun 22/24 Jun 23 Jun 28 Jun 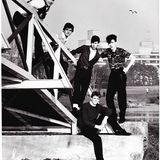