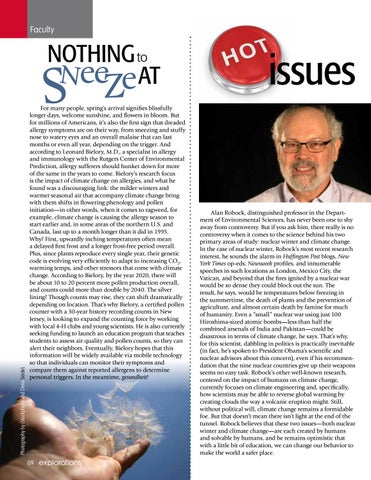 NOTHING to Nee e AT

Photography by iStockphoto and Dena Seidel.

For many people, spring’s arrival signifies blissfully longer days, welcome sunshine, and flowers in bloom. But for millions of Americans, it’s also the first sign that dreaded allergy symptoms are on their way, from sneezing and stuffy nose to watery eyes and an overall malaise that can last months or even all year, depending on the trigger. And according to Leonard Bielory, M.D., a specialist in allergy and immunology with the Rutgers Center of Environmental Prediction, allergy sufferers should hunker down for more of the same in the years to come. Bielory’s research focus is the impact of climate change on allergies, and what he found was a discouraging link: the milder winters and warmer seasonal air that accompany climate change bring with them shifts in flowering phenology and pollen initiation—in other words, when it comes to ragweed, for example, climate change is causing the allergy season to start earlier and, in some areas of the northern U.S. and Canada, last up to a month longer than it did in 1995. Why? First, upwardly inching temperatures often mean a delayed first frost and a longer frost-free period overall. Plus, since plants reproduce every single year, their genetic code is evolving very efficiently to adapt to increasing CO2, warming temps, and other stressors that come with climate change. According to Bielory, by the year 2020, there will be about 10 to 20 percent more pollen production overall, and counts could more than double by 2040. The silver lining? Though counts may rise, they can shift dramatically depending on location. That’s why Bielory, a certified pollen counter with a 30-year history recording counts in New Jersey, is looking to expand the counting force by working with local 4-H clubs and young scientists. He is also currently seeking funding to launch an education program that teaches students to assess air quality and pollen counts, so they can alert their neighbors. Eventually, Bielory hopes that this information will be widely available via mobile technology so that individuals can monitor their symptoms and compare them against reported allergens to determine personal triggers. In the meantime, gesundheit!

Alan Robock, distinguished professor in the Department of Environmental Sciences, has never been one to shy away from controversy. But if you ask him, there really is no controversy when it comes to the science behind his two primary areas of study: nuclear winter and climate change. In the case of nuclear winter, Robock’s most recent research interest, he sounds the alarm in Huffington Post blogs, New York Times op-eds, Newsweek profiles, and innumerable speeches in such locations as London, Mexico City, the Vatican, and beyond that the fires ignited by a nuclear war would be so dense they could block out the sun. The result, he says, would be temperatures below freezing in the summertime, the death of plants and the prevention of agriculture, and almost certain death by famine for much of humanity. Even a “small” nuclear war using just 100 Hiroshima-sized atomic bombs—less than half the combined arsenals of India and Pakistan—could be disastrous in terms of climate change, he says. That’s why, for this scientist, dabbling in politics is practically inevitable (in fact, he’s spoken to President Obama’s scientific and nuclear advisors about this concern), even if his recommendation that the nine nuclear countries give up their weapons seems no easy task. Robock’s other well-known research, centered on the impact of humans on climate change, currently focuses on climate engineering and, specifically, how scientists may be able to reverse global warming by creating clouds the way a volcanic eruption might. Still, without political will, climate change remains a formidable foe. But that doesn’t mean there isn’t light at the end of the tunnel. Robock believes that these two issues—both nuclear winter and climate change—are each created by humans and solvable by humans, and he remains optimistic that with a little bit of education, we can change our behavior to make the world a safer place. 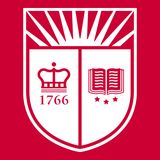