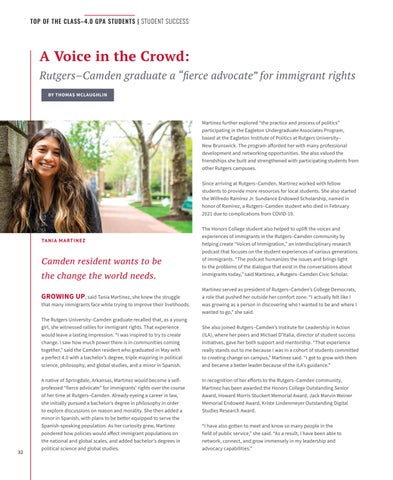 A Voice in the Crowd: Rutgers–Camden graduate a “fierce advocate” for immigrant rights BY THOMAS MCLAUGHLIN

Martinez further explored “the practice and process of politics” participating in the Eagleton Undergraduate Associates Program, based at the Eagleton Institute of Politics at Rutgers University– New Brunswick. The program afforded her with many professional development and networking opportunities. She also valued the friendships she built and strengthened with participating students from other Rutgers campuses. Since arriving at Rutgers–Camden, Martinez worked with fellow students to provide more resources for local students. She also started the Wilfredo Ramirez Jr. Sundance Endowed Scholarship, named in honor of Ramirez, a Rutgers–Camden student who died in February 2021 due to complications from COVID-19.

Camden resident wants to be the change the world needs. GROWING UP, said Tania Martinez, she knew the struggle that many immigrants face while trying to improve their livelihoods. The Rutgers University–Camden graduate recalled that, as a young girl, she witnessed rallies for immigrant rights. That experience would leave a lasting impression. “I was inspired to try to create change. I saw how much power there is in communities coming together,” said the Camden resident who graduated in May with a perfect 4.0 with a bachelor’s degree, triple majoring in political science, philosophy, and global studies, and a minor in Spanish.

A native of Springdale, Arkansas, Martinez would become a selfprofessed “fierce advocate” for immigrants’ rights over the course of her time at Rutgers–Camden. Already eyeing a career in law, she initially pursued a bachelor’s degree in philosophy in order to explore discussions on reason and morality. She then added a minor in Spanish, with plans to be better equipped to serve the Spanish-speaking population. As her curiosity grew, Martinez pondered how policies would affect immigrant populations on the national and global scales, and added bachelor’s degrees in political science and global studies.

The Honors College student also helped to uplift the voices and experiences of immigrants in the Rutgers–Camden community by helping create “Voices of Immigration,” an interdisciplinary research podcast that focuses on the student experiences of various generations of immigrants. “The podcast humanizes the issues and brings light to the problems of the dialogue that exist in the conversations about immigrants today,” said Martinez, a Rutgers–Camden Civic Scholar. Martinez served as president of Rutgers–Camden’s College Democrats, a role that pushed her outside her comfort zone. “I actually felt like I was growing as a person in discovering who I wanted to be and where I wanted to go,” she said. She also joined Rutgers–Camden’s Institute for Leadership in Action (ILA), where her peers and Michael D’Italia, director of student success initiatives, gave her both support and mentorship. “That experience really stands out to me because I was in a cohort of students committed to creating change on campus,” Martinez said. “I got to grow with them and became a better leader because of the ILA’s guidance.” In recognition of her efforts to the Rutgers–Camden community, Martinez has been awarded the Honors College Outstanding Senior Award, Howard Morris Stuckert Memorial Award, Jack Marvin Weiner Memorial Endowed Award, Kriste Lindenmeyer Outstanding Digital Studies Research Award. “I have also gotten to meet and know so many people in the field of public service,” she said. “As a result, I have been able to network, connect, and grow immensely in my leadership and advocacy capabilities.”