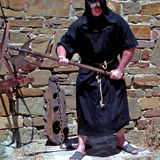 from #16 Inside the darkness
by Inside The Darkness

Hello and welcome to Inside the Darkness.

- Can you tell our readers a bit about your history, please?

Hanephi: KAFIRUN was established in 2014 with the intent of creating a new project that is uncompromising, dark, dense and with occult inspired substance. After the initial line up was completed and each member started to find their most potent place in the band, we recorded KAFIRUN's first EP called “Death Worship” which was followed by our second EP called “The Glorification of Holy Death”. After these releases we've received very positive feedback from the underground scene worldwide. In 2016, a Polish record label re-issued these two EP's as a compilation album under the title of “The Worship and Glorification of Holy Death”. Right after this release, our original drummer was replaced with our current brother. In 2017, we released our debut full-length album “Eschaton”. This album was released and re-issued via several labels on vinyl, cd and cassette formats. To promote the album release we've played a few select gigs in Canada and toured over Mexico in late 2018. Since the release of the debut album, we've been working on new material and expanding upon our initial ideas and concepts. The very first track of our recent works have just been released as a single with an accompanying music video.

- What is the Canadian scene like? What local bands should our readers check out?

H: Canadian metal scene is very fruitful and it has a lot of solid bands, both in the underground and global scene. Regarding the underground, eastern Canadian metal scene has more established and globally recognized festivals and bands, that being said, the western Canadian scene where KAFIRUN is also located, slowly but surely establishing itself as a strong metal underground stronghold with excellent bands and festivals. A few bands come to my mind from our local Vancouver metal scene. Burial Kult, Tyrants Blood, Auroch, Atrae Bilis, Mitochondrion, Finite and of course legendary Blasphemy.

H: At a very young age, I started listening to the classic heavy metal and thrash bands. Destruction, Kreator, Sodom, Slayer, WASP, Celtic Frost, Death etc. Later in my teen years, I got into more underground and extreme music, likes of 90's bands such as Mayhem, Morbid Angel, Suffocation, Satyricon, Dark Throne, Gorgoroth Satyricon and many many more.

- What does KAFIRUN mean?

H: The word itself can roughly be translated as disbelievers or infidels in the context of religion. As it is defined in Islamic teachings and in Tasawwuf, which consists the mystical and esoteric teachings of Islam, the main principle of the faith is to submit the self and the individual's will into God's will, thus ultimately letting your soul dissolve into God, a full circle, returning back to the source. This is a common teaching in Abrahamic religions, removal of the will power from the individual to subdue all his potential, a descent into a pacified state of being, where the soul is not liberated but instead condemned to a perpetual servitude in nothingness. So with all that is in mind for us KAFIRUN philosophically represents a thought that rejects this religious principle as well as rejecting God's words, his will and all hierarchical divine order.

- What are your lyrics and themes about?

H: Our lyrics are reflections that mirror and reveal the dark depths of our individual thoughts and visions. The themes evolve around the ever liberating death and the unknowable nothingness, where infinite potential awaits. There is also an occult and a religious aspect to our lyrical concepts, these are mostly based upon our personal interpretations of the religious writings and personal experiences with such beliefs and teachings.

- Does anti-religion go down well in Canada?

H: It is fair to say that Canada is a very liberal country, having anti-religious opinions, generally is not an issue. But these days with the on going woke culture and online mobs, having anti religious opinions against religions other than Christianity might cause a backlash and you might get accused of bigotry. The reason I excluded Christianity here is due to its weakened current state in most western countries. Making fun of Christianity or using anti-christian imagery and expressing such thoughts through music/art is generally an accepted norm in Canada but if you have opposing thoughts/ideas/art towards, lets say Islam as an example, there is a good chance you might even get accused of racism as well as bigotry and all sorts of made up claims against you.

- What is the Vancouver live scene like? Have European bands played there?

H: We have a vibrant live music scene here, at least we used to up until the Covid-19 pandemic has stalled the world. There are lots of active local bands playing various styles of metal music. Local support for the live gigs would vary depending on the bands, the venues and of course the gig dates. Regarding European bands, we definitely get to enjoy seeing lots of them when they tour within Canada. From what I've seen so far, most North American tour schedules already include Vancouver BC for their concert dates as well.

- Have you toured much around Canada and the US? What are the best places to play?

H: We haven't yet toured in Canada or the US but we've some plans to make it happen in the future, at least to play at a few select locations within Canada. For underground bands, touring in Canada is a tough endeavour to manage and finance. The country is very vast and distances are quite long between Eastern and Western provinces. Our only neighbouring country is the USA, which requires expensive fees to be paid and permits to be obtained for even underground bands to enter and tour over the USA. In contrast to Europe, where bands can much easily travel to nearby countries, here in Canada we have a bit of disadvantage in that regard.

- What can fans expect from your new album? Do you have a date yet?

H: We do not have a set date yet for the next album though we are currently working on the new material and we already have a few songs completed for the next record. As a whole and as individuals in the band, we always have the intent of creating music that has depth and resonating substantial quality to it.

- Do you have a message for our readers?

I would like to send out our regards to the fans, zines and bands around the world for their support. For those who have just discovered KAFIRUN, visit our official website at www.kafirun.ca for more information, contact details and social media links.

H: Thank you for this interview.

This story is from:
#16 Inside the darkness
by Inside The Darkness