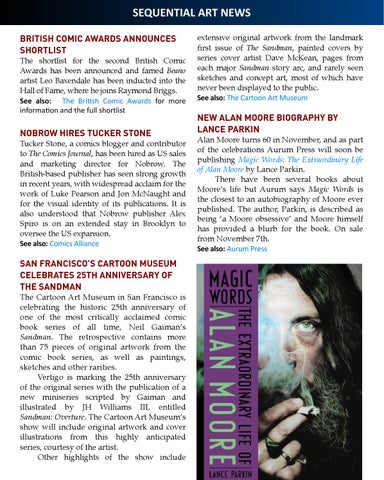 SEQUENTIAL ART NEWS BRITISH COMIC AWARDS ANNOUNCES SHORTLIST The shortlist for the second British Comic Awards has been announced and famed Beano artist Leo Baxendale has been inducted into the Hall of Fame, where he joins Raymond Briggs. See also: The BriEsh Comic Awards for more informaEon and the full shortlist

NOBROW HIRES TUCKER STONE Tucker Stone, a comics blogger and contributor to The Comics Journal, has been hired as US sales and marketing director for Nobrow. The British-based publisher has seen strong growth in recent years, with widespread acclaim for the work of Luke Pearson and Jon McNaught and for the visual identity of its publications. It is also understood that Nobrow publisher Alex Spiro is on an extended stay in Brooklyn to oversee the US expansion. See also: Comics Alliance

SAN FRANCISCO’S CARTOON MUSEUM CELEBRATES 25TH ANNIVERSARY OF THE SANDMAN The Cartoon Art Museum in San Francisco is celebrating the historic 25th anniversary of one of the most critically acclaimed comic book series of all time, Neil Gaiman’s Sandman. The retrospective contains more than 75 pieces of original artwork from the comic book series, as well as paintings, sketches and other rarities. ! Vertigo is marking the 25th anniversary of the original series with the publication of a new miniseries scripted by Gaiman and illustrated by JH Williams III, entitled Sandman: Overture. The Cartoon Art Museum’s show will include original artwork and cover illustrations from this highly anticipated series, courtesy of the artist. ! Other highlights of the show include

extensive original artwork from the landmark first issue of The Sandman, painted covers by series cover artist Dave McKean, pages from each major Sandman story arc, and rarely seen sketches and concept art, most of which have never been displayed to the public. See also: The Cartoon Art Museum

NEW ALAN MOORE BIOGRAPHY BY LANCE PARKIN Alan Moore turns 60 in November, and as part of the celebrations Aurum Press will soon be publishing Magic Words: The Extraordinary Life of Alan Moore by Lance Parkin. ! There have been several books about Moore’s life but Aurum says Magic Words is the closest to an autobiography of Moore ever published. The author, Parkin, is described as being ‘a Moore obsessive’ and Moore himself has provided a blurb for the book. On sale from November 7th. See also: Aurum Press

Graphic novels and sequential art are the focus of this FREE magazine. Featuring a stunning cover of Neil Gaiman by Hunt Emerson, Infinity has news, reviews, articles and more for sophisticated readers. 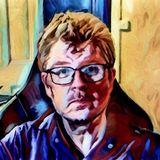