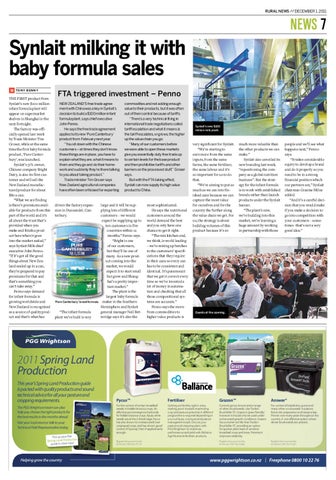 THE FIRST product from Synlait’s new $100 million infant formula plant will appear on supermarket shelves in Shanghai in the next fortnight. The factory was officially opened last week by Trade Minister Tim Groser, while at the same time the first baby formula product, ‘Pure Canterbury’, was launched. Synlait’s 51% owner, Chinese company Bright Dairy, is also its first customer and will sell the New Zealand manufactured product for about $80 a can. “What we are finding is there’s premiums available for products from this part of the world and it’s all about the trust that’s provided when you make and finish a product here when it goes into the market sealed,” says Synlait Milk chief executive John Penno. “If it’s got all the good things about New Zealand sealed up in a can, they’re prepared to pay premiums for that and that’s something you can’t take away.” Penno says demand for infant formula is growing worldwide and New Zealand is recognised as a source of quality product and that’s what has

FTA triggered investment – Penno NEW ZEALAND’S free trade agreement with China was a key in Synlait’s decision to build a $100 million infant formula plant, says chief executive John Penno. He says the free trade agreement applies to its new ‘Pure Canterbury’ product from February next year. “You sit down with the Chinese customers – at times they don’t know these things are in place, you have to explain what they are, what it means to them and they go and do their homework and suddenly they’re there talking to you about taking product.” Trade minister Tim Groser says New Zealand agricultural companies have often been criticised for exporting

commodities and not adding enough value to their products, but it was often out of their control because of tariffs. “There’s a very technical thing in international trade negotiations called tariff escalation and what it means is the tariff escalates, or grows, the higher up the value chain you go. “Many of our customers before we were able to open these markets give you essentially duty free trade up to certain levels for the base product and then prohibitive tariffs and other barriers on the processed stuff,” Groser says. But with the FTA taking effect, Synlait can now supply its high value product to China.

large and it will be supplying lots of different customers – we would expect be supplying up to ten customers in five countries within 12 months,” Penno says. “Bright is one of our customers, but they’ll be one of many. As a new product coming into the market, we would expect it to start small but grow and Shanghai’s a pretty important market.” The plant is the largest baby formula maker in the Southern Hemisphere and Synlait general manager Neil Betteridge says it’s also the

most sophisticated. He says the nutritional customers around the world demand the best and you only have one chance to get it right. “The mix kitchen end, we think, is world leading – we’re mixing up batches to the customers’ specifications that they require in their cans so every can has to be consistent and identical. It’s paramount that we get it correct every time so we’ve invested a lot of money in automation and checking that all those compositional systems are accurate.” Penno says the move from commodities to higher value products is

very significant for Synlait. “We’re starting to earn more from the same inputs, from the same farms, the same fertiliser, the same labour and it’s so important for us to do that. “We’re aiming to put as much as we can into finished cans because we can capture the most value for ourselves and for the country the further along the value chain we get. For us, the strategy is about building volumes of this product because it’s so

much more valuable than the other products we can make.” Synlait also unveiled its new branding last week, “repositioning the company as a global nutrition business”. But the strategy for the infant formula is to work with established brands rather than launch products under the Synlait banner. “The plant’s new, we’re building into this market, we’re learning a huge amount by working in partnership with those

people and we’ll see what happens next,” Penno says. “It takes considerable equity to develop a brand and do it properly so you need to be in a strong financial position which our partners are,” Synlait chairman Graeme Milne added. “And it’s a careful decision that you would make if you make a decision to go into competition with your customers – sometimes that’s not a very good idea.”

Guests at the opening.

Getting soil fertility right is a key starting point towards maximising crop and pasture potential. A different programme is required depending on your soil type, crop type and pasture management style. Discuss your pasture and cropping plans with PGG Wrightson to maximise performance and yield with Ballance Agri-Nutrients fertiliser products.

Controls gorse, broom and a range of other brushweeds. Like Tordon Brushkiller XT, Grazon is ‘grass friendly’, however it should only be used under active weed growth conditions. Grazon has a shorter soil life than Tordon Brushkiller XT, providing an option for quicker plant back of sensitive broadleaf crops and trees. Penetrant improves reliability.

For control of blackberry, gorse and many other scrub weeds in pasture, forest site preparation and waste areas. Proven over many years throughout the country. A cost effective option where dense brushweeds are present.

Your ultimate guide to crops, pastures, sprays and fertilisers.

Visit your local store or talk to your Technical Field Representative today. 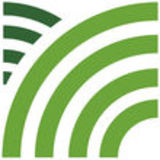