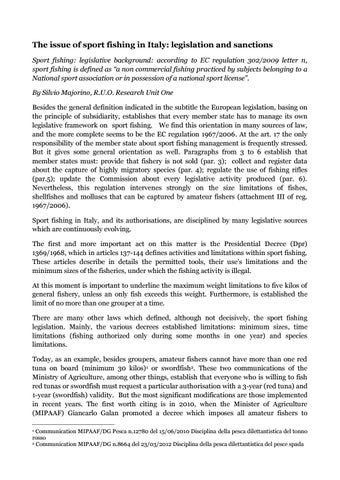 The issue of sport fishing in Italy: legislation and sanctions Sport fishing: legislative background: according to EC regulation 302/2009 letter n, sport fishing is defined as â&#x20AC;&#x153;a non commercial fishing practiced by subjects belonging to a National sport association or in possession of a national sport licenseâ&#x20AC;?. By Silvio Majorino, R.U.O. Research Unit One Besides the general definition indicated in the subtitle the European legislation, basing on the principle of subsidiarity, establishes that every member state has to manage its own legislative framework on sport fishing. We find this orientation in many sources of law, and the more complete seems to be the EC regulation 1967/2006. At the art. 17 the only responsibility of the member state about sport fishing management is frequently stressed. But it gives some general orientation as well. Paragraphs from 3 to 6 establish that member states must: provide that fishery is not sold (par. 3); collect and register data about the capture of highly migratory species (par. 4); regulate the use of fishing rifles (par.5); update the Commission about every legislative activity produced (par. 6). Nevertheless, this regulation intervenes strongly on the size limitations of fishes, shellfishes and molluscs that can be captured by amateur fishers (attachment III of reg. 1967/2006). Sport fishing in Italy, and its authorisations, are disciplined by many legislative sources which are continuously evolving. The first and more important act on this matter is the Presidential Decree (Dpr) 1369/1968, which in articles 137-144 defines activities and limitations within sport fishing. These articles describe in details the permitted tools, their useâ&#x20AC;&#x2122;s limitations and the minimum sizes of the fisheries, under which the fishing activity is illegal. At this moment is important to underline the maximum weight limitations to five kilos of general fishery, unless an only fish exceeds this weight. Furthermore, is established the limit of no more than one grouper at a time. There are many other laws which defined, although not decisively, the sport fishing legislation. Mainly, the various decrees established limitations: minimum sizes, time limitations (fishing authorized only during some months in one year) and species limitations. Today, as an example, besides groupers, amateur fishers cannot have more than one red tuna on board (minimum 30 kilos)1 or swordfish2. These two communications of the Ministry of Agriculture, among other things, establish that everyone who is willing to fish red tunas or swordfish must request a particular authorisation with a 3-year (red tuna) and 1-year (swordfish) validity. But the most significant modifications are those implemented in recent years. The first worth citing is in 2010, when the Minister of Agriculture (MIPAAF) Giancarlo Galan promoted a decree which imposes all amateur fishers to Communication MIPAAF/DG Pesca n.12780 del 15/06/2010 Disciplina della pesca dilettantistica del tonno rosso 2 Communication MIPAAF/DG n.8664 del 23/03/2012 Disciplina della pesca dilettantistica del pesce spada 1

complete a form, which represents a survey (to monitor and assess the amateur fishing phenomenon in Italy) and an authorisation at the same time. This form is a simple communication to the Ministry, which includes personal details, type of fishing (submarine, at sea level, with the help of a boat), tools used and fishing geographical area. This authorization is free and is valid for 3 years. Before this decree no authorisation or communication was needed and there was no information about this phenomenon. Today we are aware that more than 1 million people have sent this form to the Ministry. The last evolution in amateur fishing legislation is causing a number of non-welcoming reactions among fishing associations, and is a law proposal3 which would modify in a few but fundamental points the current legal framework. This proposal includes a number of integration for professional fishing, for example it introduces a fund for the fishing industry (art. 1) which would encourage investments and stimulate R&D activities. From an amateur fishing perspective, the major modifications are the followings: the total ban of two of the most used fishing tools, such as fish traps and trawl lines (art. 25), and the introduction of a “solidarity fee” for the fishing authorization (art. 24). The first modification derives from obligations introduced by the EC Regulation 1967/2006. Article 24 establishes a 10 euros fee for fishing activities without the support of a boat, and a 20 euros fee for boat fishing. This fee should be a contribution for fishing industry development. The amateur fishing associations, such as FIPA or Arci Pesco FISA, rised against this obligatory contribution, seen as a “tax” which they say would finance none of the services needed for them but would benefit those (the professional fishers) who damage and destroy marine resources. Because of this reaction as well, the legislative process is stuck in the Parliamentary Commission for Agriculture since 2013. For this reason MIPAAF has kept issuing decrees (the last one on the 23rd of March) that extend the validity of the free communication/authorization described before.

Sanctions for amateur fishing violations The main reference concerning sanctions for the violations of amateur fishing legislation is the Legislative Decree (Dlgs.) n.4 of 9 January 2012 entitled “on the reorganization of the normative concerning fishing and aquaculture”. From articles 7 to 12 it explains the entire sanctions framework, for professional and non-professional fishing. The Dlgs. specifies two particular cases of violations and the relative sanctions: offenses (with their main and accessory penalties) and administrative illicit (with their own main and accessory administrative sanctions). The offenses (art. 7) are: detention, boarding, transfer, carrying and selling of protected species or of fishes whose size is inferior to the minimum size established by law;

damaging of marine resources through the use of explosives, electricity, toxic materials etc.; fishing in foreign waters or in areas reserved to fishery plants; stealing of other’s fishery. The first two cases are punished with the arrest from 2 months to 2 years or with a fine from 2.000 to 12.000 euros. While the last two cases described are punished with half of the sanctions: from one month to one year of detention or with a fine from 1.000 to 6.000 euros. In the case of the capture of fishes smaller than the minimum legal size the sanction is represented by a fine of 1000 euros. The relevant authority (coastguard or “capitaneria”) at its discretion may apply accessory penalties as well, which consist in: requisition of fishery, of the boat, or the fishing tools if not regulatory. The administrative illicit are punished with a fine from 2.000 to 12.000 euros (excluding the possible accessory sanctions such as the requisitions written above). The illicit are: - The issue of sport fishing in Italy

The issue of sport fishing in Italy