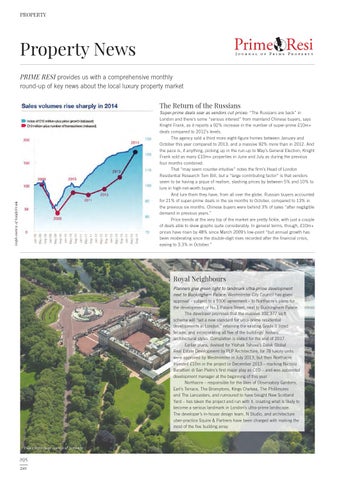 The Return of the Russians

Super-prime deals soar as vendors cut prices: “The Russians are back” in London and there’s some “serious interest” from mainland Chinese buyers, says Knight Frank, as it reports a 92% increase in the number of super-prime £10m+ deals compared to 2012’s levels. The agency sold a third more eight-figure homes between January and October this year compared to 2013, and a massive 92% more than in 2012. And the pace is, if anything, picking up in the run-up to May’s General Election; Knight Frank sold as many £10m+ properties in June and July as during the previous four months combined. That “may seem counter-intuitive” notes the firm’s Head of London Residential Research Tom Bill, but a “large contributing factor” is that vendors seem to be having a pique of realism, slashing prices by between 5% and 10% to lure in high-net-worth buyers. And lure them they have, from all over the globe. Russian buyers accounted for 21% of super-prime deals in the six months to October, compared to 13% in the previous six months. Chinese buyers were behind 3% of sales “after negligible demand in previous years.” Price trends at the very top of the market are pretty fickle, with just a couple of deals able to skew graphs quite considerably. In general terms, though, £10m+ prices have risen by 48% since March 2009’s low-point “but annual growth has been moderating since the double-digit rises recorded after the financial crisis, easing to 3.3% in October.”

Royal Neighbours Planners give green light to landmark ultra-prime development next to Buckingham Palace: Westminster City Council has given approval – subject to a S106 agreement – to Northacre’s plans for the development of No.1 Palace Street, next to Buckingham Palace. The developer promises that the massive 302,377 sq ft scheme will “set a new standard for ultra-prime residential developments in London,” retaining the existing Grade II listed facade, and incorporating all five of the buildings’ historic architectural styles. Completion is slated for the end of 2017. Earlier plans, devised for Yitzhak Tshuva’s Delek Global Real Estate Development by PLP Architecture, for 78 luxury units were approved by Westminster in July 2013, but then Northacre invested £10m in the project in December 2013 – marking Niccoló Barattieri di San Pietro’s first major play as CEO – and was appointed development manager at the beginning of this year. Northacre – responsible for the likes of Observatory Gardens, Earl’s Terrace, The Bromptons, Kings Chelsea, The Phillimores and The Lancasters, and rumoured to have bought New Scotland Yard – has taken the project and run with it, creating what is likely to become a serious landmark in London’s ultra-prime landscape. The developer’s in-house design team, N Studio, and architecture uber-practice Squire & Partners have been charged with making the most of the five building array.

The Kensington & Chelsea Magazine showcases news concerning local residents and events happening in and around the Royal Borough, as well as...

The Kensington & Chelsea Magazine showcases news concerning local residents and events happening in and around the Royal Borough, as well as...