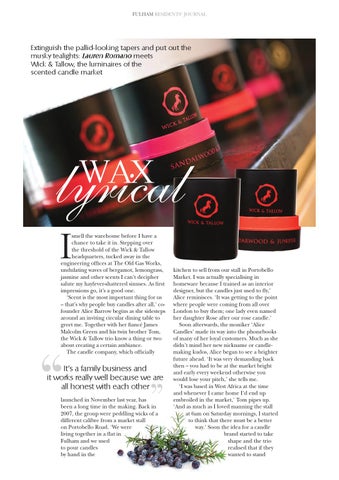 Extinguish the pallid-looking tapers and put out the musky tealights: Lauren Romano meets Wick & Tallow, the luminaires of the scented candle market

smell the warehouse before I have a chance to take it in. Stepping over the threshold of the Wick & Tallow headquarters, tucked away in the engineering offices at The Old Gas Works, undulating waves of bergamot, lemongrass, jasmine and other scents I can’t decipher salute my hayfever-shattered sinuses. As first impressions go, it’s a good one. ‘Scent is the most important thing for us – that’s why people buy candles after all,’ cofounder Alice Barrow begins as she sidesteps around an inviting circular dining table to greet me. Together with her fiancé James Malcolm Green and his twin brother Tom, the Wick & Tallow trio know a thing or two about creating a certain ambiance. The candle company, which officially

It’s a family business and it works really well because we are all honest with each other launched in November last year, has been a long time in the making. Back in 2007, the group were peddling wicks of a different calibre from a market stall on Portobello Road. ‘We were living together in a flat in Fulham and we used to pour candles by hand in the

kitchen to sell from our stall in Portobello Market. I was actually specialising in homeware because I trained as an interior designer, but the candles just used to fly,’ Alice reminisces. ‘It was getting to the point where people were coming from all over London to buy them; one lady even named her daughter Rose after our rose candle.’ Soon afterwards, the moniker ‘Alice Candles’ made its way into the phonebooks of many of her loyal customers. Much as she didn’t mind her new nickname or candlemaking kudos, Alice began to see a brighter future ahead. ‘It was very demanding back then – you had to be at the market bright and early every weekend otherwise you would lose your pitch,’ she tells me. ‘I was based in West Africa at the time and whenever I came home I’d end up embroiled in the market,’ Tom pipes up. ‘And as much as I loved manning the stall at 6am on Saturday mornings, I started to think that there must be a better way.’ Soon the idea for a candle brand started to take shape and the trio realised that if they wanted to stand

Welcome to the September edition of Fulham Residents' Journal, celebrating the dynamism of the area and bringing you the latest features, ar...

Welcome to the September edition of Fulham Residents' Journal, celebrating the dynamism of the area and bringing you the latest features, ar...