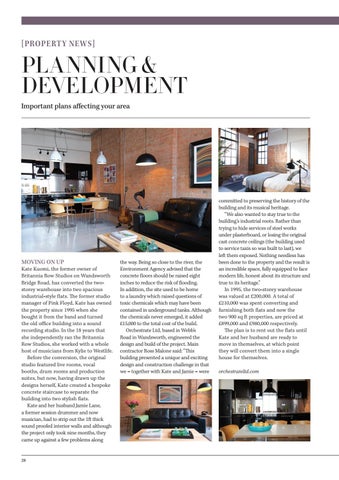 Moving on up Kate Kuomi, the former owner of Britannia Row Studios on Wandsworth Bridge Road, has converted the twostorey warehouse into two spacious industrial-style flats. The former studio manager of Pink Floyd, Kate has owned the property since 1995 when she bought it from the band and turned the old office building into a sound recording studio. In the 18 years that she independently ran the Britannia Row Studios, she worked with a whole host of musicians from Kylie to Westlife. Before the conversion, the original studio featured live rooms, vocal booths, drum rooms and production suites, but now, having drawn up the designs herself, Kate created a bespoke concrete staircase to separate the building into two stylish flats. Kate and her husband Jamie Lane, a former session drummer and now musician, had to strip out the 1ft thick sound proofed interior walls and although the project only took nine months, they came up against a few problems along

the way. Being so close to the river, the Environment Agency advised that the concrete floors should be raised eight inches to reduce the risk of flooding. In addition, the site used to be home to a laundry which raised questions of toxic chemicals which may have been contained in underground tanks. Although the chemicals never emerged, it added £15,000 to the total cost of the build. Orchestrate Ltd, based in Webb’s Road in Wandsworth, engineered the design and build of the project. Main contractor Ross Malone said: “This building presented a unique and exciting design and construction challenge in that we – together with Kate and Jamie – were

committed to preserving the history of the building and its musical heritage. “We also wanted to stay true to the building’s industrial roots. Rather than trying to hide services of steel works under plasterboard, or losing the original cast concrete ceilings (the building used to service taxis so was built to last), we left them exposed. Nothing needless has been done to the property and the result is an incredible space, fully equipped to face modern life, honest about its structure and true to its heritage.” In 1995, the two-storey warehouse was valued at £200,000. A total of £210,000 was spent converting and furnishing both flats and now the two 900 sq ft properties, are priced at £899,000 and £980,000 respectively. The plan is to rent out the flats until Kate and her husband are ready to move in themselves, at which point they will convert them into a single house for themselves. orchestrateltd.com

Welcome to the latest edition of Fulham Residents' Journal, celebrating the dynamism of the area and bringing you the latest features, articles and reviews in the definitive guide for luxury modern living. 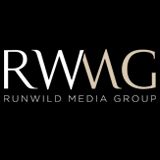