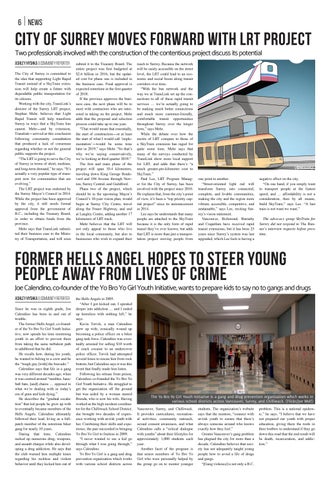 Two professionals involved with the construction of the contentious project discuss its potential Ashley Hyshka | community reporter The City of Surrey is committed to the idea that supporting Light Rapid Transit instead of a SkyTrain extension will help create a future with dependable public transportation for its citizens. Working with the city, TransLink’s director of the Surrey LRT project, Stephan Mehr, believes that Light Rapid Transit will help transform Surrey in ways that a SkyTrain line cannot. Mehr—and by extension, Translink—arrived at this conclusion following community consultation that produced a lack of consensus regarding whether or not the general public supports the project. “The LRT is going to serve the City of Surrey in terms of short, medium, and long-term demand,” he says. “It’s actually a very popular type of transport now for communities that are evolving.” The LRT project was endorsed by the Surrey Mayor’s Council in 2014. While the project has been approved by the city, it still needs formal approval from the government of B.C., including the Treasury Board, in order to obtain funds from the province. Mehr says that TransLink submitted their business case to the Ministry of Transportation, and will soon

submit it to the Treasury Board. The entire project was first budgeted at $2.6 billion in 2016, but the updated cost for phase one is included in the business case. Final approval is expected sometime in the first quarter of 2018. If the province approves the business case, the next phase will be to meet with contractors who are interested in taking on the project. Mehr adds that the proposal and selection process could take up to one year. “That would mean that essentially, the start of construction—or at least the start of what I would call ‘implementation’—would be some time later in 2019,” says Mehr. “So that’s why we’re saying conservatively, we’re looking at third quarter 2019.” The first and main phase of the project will span 10.4 kilometers, traveling down King George Boulevard and 104 Avenue through Newton, Surrey Central, and Guildford. Phase two of the project, which should be in the upcoming Mayor’s Council’s 10-year vision plan, would begin at Surrey City Centre, travel along the Fraser Highway, and end at Langley Centre, adding another 17 kilometers of LRT track. Mehr believes that the LRT will not only appeal to those who live in the local community, but also to businesses who wish to expand their

reach to Surrey. Because the network will be easily accessible on the street level, the LRT could lead to an economic and social boom along transit corridors over time. “With the bus network and the way we at TransLink set up the connections to all of these rapid transit services … we’re actually going to be making much better connections and much more customer-friendly, comfortable transit opportunities throughout Surrey over the longer term,” says Mehr. While the debate over how the merits of LRT compare to those of a SkyTrain extension has raged for quite some time, Mehr says that many of the surveys conducted by TransLink show more local support for LRT, and adds that there’s “a much greater-per-kilometer cost to SkyTrain.” Paul Lee, LRT Program Manager for the City of Surrey, has been involved with the project since 2010. He explains that, from the city’s point of view, it’s been a “top priority capital project” since its announcement in 2014. Lee says he understands that many people are attached to the SkyTrain because it is the only form of rapid transit they’ve ever known, but adds that LRT is more than just a transportation project moving people from

(@RESLUS) one point to another. “Street-oriented light rail will transform Surrey into connected, complete, and livable communities, making the city and the region more vibrant, accessible, competitive, and sustainable,” says Lee, reciting Surrey’s vision statement. Vancouver, Richmond, Burnaby and Coquitlam have received rapid transit extensions, but it has been 23 years since Surrey’s system was last upgraded, which Lee feels is having a

negative effect on the city. “On one hand, if you simply want to transport people at the fastest speed, and … affordability is not a consideration, then by all means, build SkyTrain,” says Lee. “A fast train is not want we want.” The advocacy group SkyTrain for Surrey did not respond to The Runner’s interview requests before press time.

Joe Calendino, co-founder of the Yo Bro Yo Girl Youth Initiative, wants to prepare kids to say no to gangs and drugs Ashley Hyshka | community reporter Since he was in eighth grade, Joe Calendino has been in and out of trouble. The former Hells Angel, co-founder of the Yo Bro Yo Girl Youth Initiative, now spends his time mentoring youth in an effort to prevent them from taking the same turbulent path to adulthood that he did. He recalls how, during his youth, he wanted to belong to a crew and be the “tough guy [with] the bravado.” Calendino says that life in a gang was very different decades ago, when it was centred around “rumbles, baseball bats, [and] chains … opposed to what we’re dealing with in today’s era of guns and kids dying.” He describes the “gradual escalation” that led people he grew up with to eventually became members of the Hells Angels. Calendino ultimately followed their lead, living as a fullpatch member of the notorious biker gang for nearly 10 years. During that time, Calendino racked up numerous drug, weapons, and assault charges while also developing a drug addiction. He says that the club warned him multiple times regarding his reckless and violent behavior until they kicked him out of

the Hells Angels in 2005. “After I got kicked out, I spiraled deeper into addiction … and I ended up homeless with nothing left,” he says. Kevin Torvik, a man Calendino grew up with, ironically wound up becoming a police officer on a biker gang task force. Calendino was eventually arrested for selling $10 worth of crack cocaine to an undercover police officer. Torvik had attempted several times to rescue him from rock bottom, but Calendino says it was this event that finally made him listen. Following his release from prison, Calendino co-founded the Yo Bro Yo Girl Youth Initiative. He struggled to get the organization off the ground but was aided by a woman named Brenda, who is now his wife. Having worked as the high incident coordinator for the Chilliwack School District, she brought two decades of experience working with at-risk youth with her. Combining their skills and experience, the pair succeeded in bringing Yo Bro Yo Girl to fruition in 2009. “I never wanted to see a kid go through what I was going through,” says Calendino. Yo Bro Yo Girl is a gang and drug prevention organization which works with various school districts across

The Yo Bro Yo Girl Youth Initiative is a gang and drug prevention organization which works in various school districts across Vancouver, Surrey, and Chilliwack. (Flickr/Joe Wolf) Vancouver, Surrey, and Chilliwack. It provides curriculums, recreational activities, community outreach, sexual consent awareness, and what Calendino calls a “critical dialogue with youths” about their lifestyles for approximately 1,000 students each year. Another facet of the program is that senior members of Yo Bro Yo Girl who were personally helped by the group go on to mentor younger

students. The organization’s website says that the mentors, “connect with at-risk youth to ensure that there’s always someone around who knows exactly how they feel.” Greater Vancouver’s gang problem has plagued the city for more than a decade. Calendino believes that society has not adequately taught young people how to avoid a life of drugs and gangs. “[Gang violence] is not only a B.C.

problem. This is a national epidemic,” he says. “I believe that we have not prepared our youth with proper education, giving them the tools in their toolbox to understand if they go down this road that the end result will be death, incarceration, and addiction.” 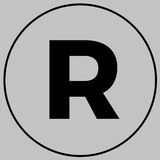