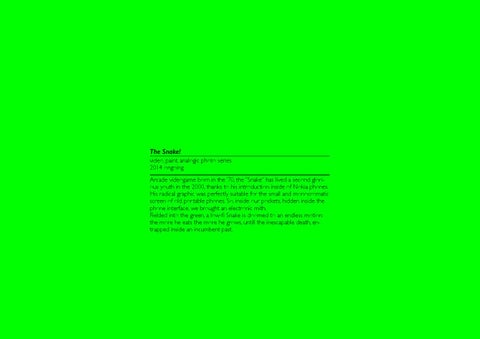 The Snake!  video, paint, analogic photo series 2014 ongoing Arcade videogame born in the ‘70, the “Snake” has lived a second glorious youth in the 2000, thanks to his introduction inside of Nokia phones. His radical graphic was perfectly suitable for the small and monocromatic screen of old portable phones. So, inside our pockets, hidden inside the phone interface, we brought an electronic mith. Fielded into the green, a low-fi Snake is doomed to an endless motion: the more he eats the more he grows, untill the inescapable death, entrapped inside an incumbent past.