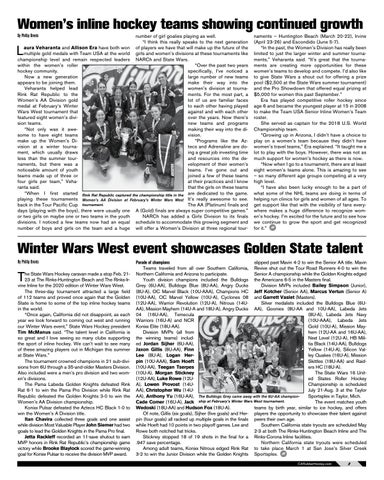 number of girl goalies playing as well. “I think this really speaks to the next generation aura Veharanta and Allison Era have both won of players we have that will make up the future of the multiple gold medals with Team USA at the world girls and women’s divisions at these tournaments like championship level and remain respected leaders NARCh and State Wars. within the women’s roller “Over the past two years hockey community. specifically, I’ve noticed a Now a new generation large number of new teams appears to be joining them. make their way into the Veharanta helped lead women’s division at tournaRink Rat Republic to the ments. For the most part, a Women’s AA Division gold lot of us are familiar faces medal at February’s Winter to each other having played Wars West tournament that against and with each other featured eight women’s diviover the years. Now there’s sion teams. new teams and programs “Not only was it awemaking their way into the disome to have eight teams vision. make up the Women’s Di“Programs like the Azvision at a winter tournatecs and Adrenaline are doment, which usually draws ing a great job investing time less than the summer tourand resources into the denaments, but there was a velopment of their women’s noticeable amount of youth teams. I’ve gone out and teams made up of three or joined a few of these teams four girls per team,” Vehaat their practices and I know ranta said. that the girls on these teams “When I first started Rink Rat Republic captured the championship title in the are dedicated to the game. playing these tournaments Women’s AA Division at February’s Winter Wars West It’s really awesome to see. back in the Tour Pacific Cup tournament. The AA (Platinum) finals and days (playing with the boys), there were usually one A (Gold) finals are always super competitive games.” or two girls on maybe one or two teams in the youth NARCh has added a Girls Division to its finals divisions. I noticed a few teams now had an equal schedule to accommodate this growing segment and number of boys and girls on the team and a huge will offer a Women’s Division at three regional tour-

naments – Huntington Beach (March 20-22), Irvine (April 23-26) and Escondido (June 5-7). “In the past, the Women’s Division has really been limited to just the larger winter and summer tournaments,” Veharanta said. “It’s great that the tournaments are creating more opportunities for these women’s teams to develop and compete. I’d also like to give State Wars a shout out for offering a prize pool ($2,500 at the State Wars summer tournament) and the Pro Showdown that offered equal prizing at $5,000 for women this past September.” Era has played competitive roller hockey since age 6 and became the youngest player at 15 in 2008 to make the Team USA Senior Inline Women’s Team roster. She served as captain for the 2018 U.S. World Championship team. “Growing up in Arizona, I didn’t have a choice to play on a women’s team because they didn’t have women’s travel teams,” Era explained. “It taught me a lot to play with the boys. However, there was not as much support for women’s hockey as there is now. “Now when I go to a tournament, there are at least eight women’s teams alone. This is amazing to see – so many different age groups competing at a very high level. “I have also been lucky enough to be a part of what some of the NHL teams are doing in terms of helping run clinics for girls and women of all ages. To get support like that with the visibility of fans everywhere makes a huge difference to recognize women’s hockey. I’m excited for the future and to see how we continue to grow the sport and get recognized for it.”

he State Wars Hockey caravan made a stop Feb. 2123 at The Rinks-Huntington Beach and The Rinks-Irvine Inline for the 2020 edition of Winter Wars West. The three-day tournament attracted a large field of 112 teams and proved once again that the Golden State is home to some of the top inline hockey teams in the world. “Once again, California did not disappoint, as each year we look forward to coming out west and running our Winter Wars event,” State Wars Hockey president Tim McManus said. “The talent level in California is so great and I love seeing so many clubs supporting the sport of inline hockey. We can’t wait to see many of these amazing players out in Michigan this summer at State Wars.” The tournament crowned champions in 21 sub-divisions from 6U through a 35-and-older Masters Division. Also included were a men’s pro division and two women’s divisions. The Pama Labeda Golden Knights defeated Rink Rat 6-1 to win the Pama Pro Division while Rink Rat Republic defeated the Golden Knights 3-0 to win the Women’s AA Division championship. Konixx Pulsar defeated the Aztecs HC Black 1-0 to win the Women’s A Division title. Itan Chavira collected three goals and one assist while division Most Valuable Player John Siemer had two goals to lead the Golden Knights in the Pama Pro final. Jetta Rackleff recorded an 11-save shutout to earn MVP honors in Rink Rat Republic’s championship game victory while Brooke Blaylock scored the game-winning goal for Konixx Pulsar to receive the division MVP award.