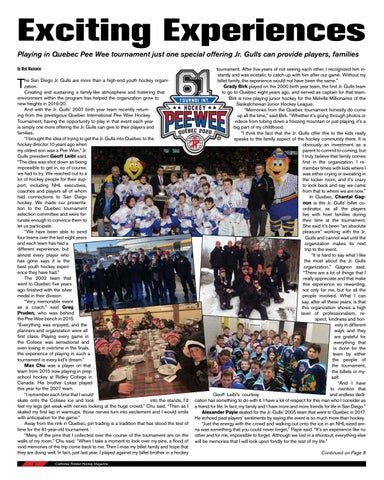 he San Diego Jr. Gulls are more than a high-end youth hockey organization. Creating and sustaining a family-like atmosphere and fostering that environment within the program has helped the organization grow to new heights in 2019-20. And with the Jr. Gulls’ 2007 birth year team recently returning from the prestigious Quebec International Pee Wee Hockey Tournament, having the opportunity to play in that event each year is simply one more offering the Jr. Gulls can give to their players and families. “I brought the idea of trying to get the Jr. Gulls into Quebec to the hockey director 10 years ago when my oldest son was a Pee Wee,” Jr. Gulls president Geoff Leibl said. “The idea was shot down as being impossible to get in, so of course, we had to try. We reached out to a lot of hockey people for their support, including NHL executives, coaches and players all of whom had connections to San Diego hockey. We made our presentation to the Quebec tournament selection committee and were fortunate enough to convince them to let us participate. “We have been able to send four teams over the last eight years and each team has had a different experience, but almost every player who has gone says it is the best youth hockey experience they have had.” The 2002 team that went to Quebec five years ago finished with the silver medal in their division. “Very memorable event as a coach,” said Greg Pruden, who was behind the Pee Wee bench in 2015. “Everything was enjoyed, and the planners and organization were all first class. Playing every game in the Colisee was sensational and even losing in overtime in the finals, the experience of playing in such a tournament is every kid’s dream.” Max Chu was a player on that team from 2015 now playing in prep school hockey at Ridley College in Canada. His brother Lukas played this year for the 2007 team. “I remember each time that I would skate onto the Colisee ice and look into the stands, I’d feel my legs get weak with nerves looking at the huge crowd,” Chu said. “Then as I skated my first lap in warmups, those nerves turn into excitement and I would smile with anticipation for the game.” Away from the rink in Quebec, pin trading is a tradition that has stood the test of time for the 61-year-old tournament. “Many of the pins that I collected over the course of the tournament are on the walls of my room,” Chu said. “When I take a moment to look over my pins, a flood of vivid memories of the trip come back to me. Then I miss my billet family and hope that they are doing well. In fact, just last year, I played against my billet brother in a hockey 6

tournament. After five years of not seeing each other, I recognized him instantly and was ecstatic to catch up with him after our game. Without my billet family, the experience would not have been the same.” Grady Birk played on the 2000 birth year team, the first Jr. Gulls team to go to Quebec eight years ago, and served as captain for that team. Birk is now playing junior hockey for the Melville Millionaires of the Saskatchewan Junior Hockey League. “Memories from the Quebec tournament honestly do come up all the time,” said Birk. “Whether it’s going through photos or videos from tubing down a freezing mountain or just playing, it’s a big part of my childhood. “I think the fact that the Jr. Gulls offer this to the kids really speaks to the family aspect of the hockey community there. It is obviously an investment as a parent to commit to coming, but I truly believe that family comes first in the organization. I remember times with kids where I was either crying or sweating in the locker room, and it’s crazy to look back and say we came from that to where we are now.” In Quebec, Chantal Gagnon is the Jr. Gulls’ billet coordinator, as all the players live with host families during their time at the tournament. She said it’s been “an absolute pleasure” working with the Jr. Gulls and cannot wait until the organization makes its next trip to the event. “It is hard to say what I like the most about the Jr. Gulls organization,” Gagnon said. “There are a lot of things that I really appreciate and that make this experience so rewarding, not only for me, but for all the people involved. What I can say, after all these years, is that this organization shows a high level of professionalism, respect, kindness and honesty in different ways and they are grateful for everything that is done for the team by either the people of the tournament, the billets or myself. “And I have to mention that Geoff Leibl’s courtesy and endless dedication has something to do with it. I have a lot of respect for this man who I consider as a friend for life. In fact, my family and I have more and more friends for life in San Diego.” Alexander Payie skated for the Jr. Gulls’ 2005 team that went to Quebec in 2017. He echoed past players’ sentiments by saying the event is so much more than hockey. “Just the energy with the crowd and walking out onto the ice in an NHL-sized arena was something that you could never forget,” Payie said. “It’s an experience like no other and for me, impossible to forget. Although we lost in a shootout, everything else will be memories that I will look upon fondly for the rest of my life.” Continued on Page 8