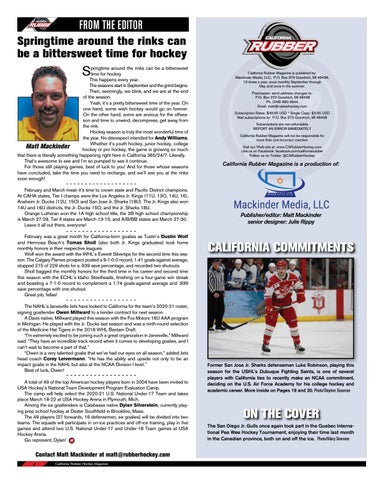 pringtime around the rinks can be a bittersweet time for hockey This happens every year. The seasons start in September and the grind begins. Then, seemingly, we blink, and we are at the end of the season. Yeah, it’s a pretty bittersweet time of the year. On one hand, some wish hockey would go on forever. On the other hand, some are anxious for the offseason and time to unwind, decompress, get away from the rink. Hockey season is truly the most wonderful time of the year. No disrespect intended for Andy Williams. Whether it’s youth hockey, junior hockey, college Matt Mackinder hockey or pro hockey, the game is growing so much that there is literally something happening right here in California 365/24/7. Literally. That’s awesome to see and I’m so pumped to see it continue. For those still playing games, best of luck to you! And for those whose seasons have concluded, take the time you need to recharge, and we’ll see you at the rinks soon enough! February and March mean it’s time to crown state and Pacific District champions. At CAHA states, Tier I champs were the Los Angeles Jr. Kings (11U, 13O, 14U, 16), Anaheim Jr. Ducks (12U, 15O) and San Jose Jr. Sharks (18U). The Jr. Kings also won 14U and 16U districts, the Jr. Ducks 15O, and the Jr. Sharks 18U. Orange Lutheran won the 1A high school title, the 2B high school championship is March 27-29, Tier II states are March 13-15, and A/B/BB states are March 27-30. Leave it all out there, everyone! February was a great month for California-born goalies as Tustin’s Dustin Wolf and Hermosa Beach’s Tomas Sholl (also both Jr. Kings graduates) took home monthly honors in their respective leagues. Wolf won the award with the WHL’s Everett Silvertips for the second time this season. The Calgary Flames prospect posted a 9-1-0-0 record, 1.41 goals-against average, stopped 215 of 229 shots for a .939 save percentage, and recorded two shutouts. Sholl bagged the monthly honors for the third time in his career and second time this season with the ECHL’s Idaho Steelheads, finishing on a four-game win streak and boasting a 7-1-0 record to complement a 1.74 goals-against average and .939 save percentage with one shutout. Great job, fellas! The NAHL’s Janesville Jets have looked to California for the team’s 2020-21 roster, signing goaltender Owen Millward to a tender contract for next season. A Davis native, Millward played this season with the Fox Motors 16U AAA program in Michigan. He played with the Jr. Ducks last season and was a ninth-round selection of the Medicine Hat Tigers in the 2018 WHL Bantam Draft. “I’m extremely excited to be joining such a great organization in Janesville,” Millward said. “They have an incredible track record when it comes to developing goalies, and I can’t wait to become a part of that.” “Owen is a very talented goalie that we’ve had our eyes on all season,” added Jets head coach Corey Leivermann. “He has the ability and upside not only to be an impact goalie in the NAHL but also at the NCAA Division I level.” Best of luck, Owen! A total of 49 of the top American hockey players born in 2004 have been invited to USA Hockey’s National Team Development Program Evaluation Camp. The camp will help select the 2020-21 U.S. National Under-17 Team and takes place March 18-22 at USA Hockey Arena in Plymouth, Mich. Among the six goaltenders is Calabasas native Dylan Silverstein, currently playing prep school hockey at Dexter Southfield in Brookline, Mass. The 49 players (27 forwards, 16 defensemen, six goalies) will be divided into two teams. The squads will participate in on-ice practices and off-ice training, play in five games and attend two U.S. National Under-17 and Under-18 Team games at USA Hockey Arena. Go represent, Dylan!

California Rubber Magazine is a production of:

Former San Jose Jr. Sharks defenseman Luke Robinson, playing this season for the USHL’s Dubuque Fighting Saints, is one of several players with California ties to recently make an NCAA commitment, deciding on the U.S. Air Force Academy for his college hockey and academic career. More inside on Pages 19 and 20. Photo/Stephen Gassman

ON THE COVER The San Diego Jr. Gulls once again took part in the Quebec International Pee Wee Hockey Tournament, enjoying their time last month in the Canadian province, both on and off the ice. Photo/Hilary Devrome