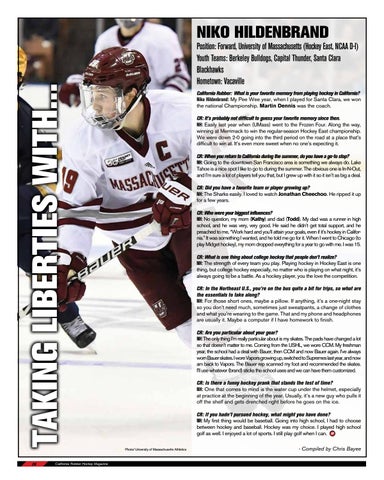 Position: Forward, University of Massachusetts (Hockey East, NCAA D-I) Youth Teams: Berkeley Bulldogs, Capital Thunder, Santa Clara Blackhawks Hometown: Vacaville California Rubber: What is your favorite memory from playing hockey in California? Niko Hildenbrand: My Pee Wee year, when I played for Santa Clara, we won the national Championship. Martin Dennis was the coach. CR: It’s probably not difficult to guess your favorite memory since then. NH: Easily last year when (UMass) went to the Frozen Four. Along the way, winning at Merrimack to win the regular-season Hockey East championship. We were down 2-0 going into the third period on the road at a place that’s difficult to win at. It’s even more sweet when no one’s expecting it. CR: When you return to California during the summer, do you have a go-to stop? NH: Going to the downtown San Francisco area is something we always do. Lake Tahoe is a nice spot I like to go to during the summer. The obvious one is In-N-Out, and I’m sure a lot of players tell you that, but I grew up with it so it isn’t as big a deal. CR: Did you have a favorite team or player growing up? NH: The Sharks easily. I loved to watch Jonathan Cheechoo. He ripped it up for a few years. CR: Who were your biggest influences? NH: No question, my mom (Kathy) and dad (Todd). My dad was a runner in high school, and he was very, very good. He said he didn’t get total support, and he preached to me, “Work hard and you’ll attain your goals, even if it’s hockey in California.” It was something I wanted, and he told me go for it. When I went to Chicago (to play Midget hockey), my mom dropped everything for a year to go with me. I was 15. CR: What is one thing about college hockey that people don’t realize? NH: The strength of every team you play. Playing hockey in Hockey East is one thing, but college hockey especially, no matter who is playing on what night, it’s always going to be a battle. As a hockey player, you the love the competition. CR: In the Northeast U.S., you’re on the bus quite a bit for trips, so what are the essentials to take along? NH: For those short ones, maybe a pillow. If anything, it’s a one-night stay so you don’t need much, sometimes just sweatpants, a change of clothes and what you’re wearing to the game. That and my phone and headphones are usually it. Maybe a computer if I have homework to finish. CR: Are you particular about your gear? NH: The only thing I’m really particular about is my skates. The pads have changed a lot so that doesn’t matter to me. Coming from the USHL, we wore CCM. My freshman year, the school had a deal with Bauer, then CCM and now Bauer again. I’ve always worn Bauer skates. I wore Vapors growing up, switched to Supremes last year, and now am back to Vapors. The Bauer rep scanned my foot and recommended the skates. I’ll use whatever (brand) sticks the school uses and we can have them customized. CR: Is there a funny hockey prank that stands the test of time? NH: One that comes to mind is the water cup under the helmet, especially at practice at the beginning of the year. Usually, it’s a new guy who pulls it off the shelf and gets drenched right before he goes on the ice. CR: If you hadn’t pursued hockey, what might you have done? NH: My first thing would be baseball. Going into high school, I had to choose between hockey and baseball. Hockey was my choice. I played high school golf as well. I enjoyed a lot of sports. I still play golf when I can. Photo/ University of Massachusetts Athletics