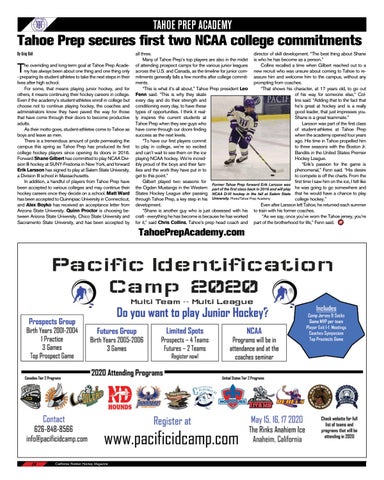 he overriding and long-term goal at Tahoe Prep Academy has always been about one thing and one thing only - preparing its student athletes to take the next steps in their lives after high school. For some, that means playing junior hockey, and for others, it means continuing their hockey careers in college. Even if the academy’s student-athletes enroll in college but choose not to continue playing hockey, the coaches and administrators know they have paved the way for those that have come through their doors to become productive adults. As their motto goes, student-athletes come to Tahoe as boys and leave as men. There is a tremendous amount of pride permeating the campus this spring as Tahoe Prep has produced its first college hockey players since opening its doors in 2016. Forward Shane Gilbert has committed to play NCAA Division III hockey at SUNY-Fredonia in New York, and forward Erik Larsson has signed to play at Salem State University, a Division III school in Massachusetts. In addition, a handful of players from Tahoe Prep have been accepted to various colleges and may continue their hockey careers once they decide on a school. Matt Ward has been accepted to Quinnipiac University in Connecticut, and Alex Boyko has received an acceptance letter from Arizona State University. Quinn Proctor is choosing between Arizona State University, Chico State University and Sacramento State University, and has been accepted by

all three. director of skill development. “The best thing about Shane Many of Tahoe Prep’s top players are also in the midst is who he has become as a person.” of attending prospect camps for the various junior leagues Collins recalled a time when Gilbert reached out to a across the U.S. and Canada, as the timeline for junior com- new recruit who was unsure about coming to Tahoe to remitments generally falls a few months after college commit- assure him and welcome him to the campus, without any ments. prompting from coaches. “This is what it’s all about,” Tahoe Prep president Leo “That shows his character, at 17 years old, to go out Fenn said. “This is why they skate of his way for someone else,” Colevery day and do their strength and lins said. “Adding that to the fact that conditioning every day, to have these he’s great at hockey and is a really types of opportunities. I think it realgood leader, that just impresses you. ly inspires the current students at Shane is a great teammate.” Tahoe Prep when they see guys who Larsson was part of the first class have come through our doors finding of student-athletes at Tahoe Prep success as the next levels. when the academy opened four years “To have our first players commit ago. His time in Tahoe propelled him to play in college, we’re so excited to three seasons with the Boston Jr. and can’t wait to see them on the ice Bandits in the United States Premier playing NCAA hockey. We’re incredHockey League. “Erik’s passion for the game is ibly proud of the boys and their famphenomenal,” Fenn said. “His desire ilies and the work they have put in to to compete is off the charts. From the get to this point.” first time I saw him on the ice, I felt like Gilbert played two seasons for Former Tahoe Prep forward Erik Larsson was the Ogden Mustangs in the Western part of the first class back in 2016 and will play he was going to go somewhere and States Hockey League after passing NCAA D-III hockey in the fall at Salem State that he would have a chance to play college hockey.” through Tahoe Prep, a key step in his University. Photo/Tahoe Prep Academy Even after Larsson left Tahoe, he returned each summer development. “Shane is another guy who is just obsessed with his to train with his former coaches. “As we say, once you’ve worn the Tahoe jersey, you’re craft - everything he has become is because he has worked for it,” said Chris Collins, Tahoe’s prep head coach and part of the brotherhood for life,” Fenn said.