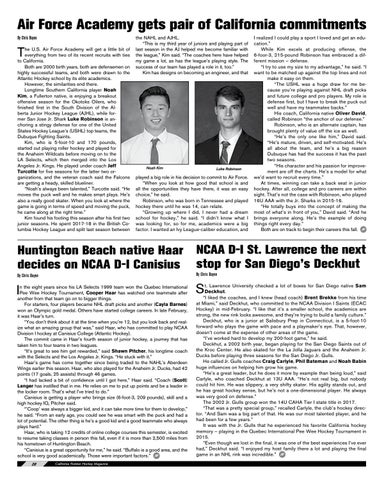 he U.S. Air Force Academy will get a little bit of everything from two of its recent recruits with ties to California. Both are 2000 birth years, both are defensemen on highly successful teams, and both were drawn to the Atlantic Hockey school by its elite academics. However, the similarities end there. Longtime Southern California player Noah Kim, a Fullerton native, is enjoying a breakout offensive season for the Okotoks Oilers, who finished first in the South Division of the Alberta Junior Hockey League (AJHL), while former San Jose Jr. Shark Luke Robinson is anchoring a stingy defense for one of the United States Hockey League’s (USHL) top teams, the Dubuque Fighting Saints. Kim, who is 5-foot-10 and 170 pounds, started out playing roller hockey and played for the Anaheim Wildcats before moving on to the LA Selects, which then merged into the Los Angeles Jr. Kings. He played under coach Jeff Turcotte for five seasons for the latter two organizations, and the veteran coach said the Falcons are getting a heady, skilled blueliner. “Noah’s always been talented,” Turcotte said. “He moves the puck well and he makes smart plays. He’s also a really good skater. When you look at where the game is going in terms of speed and moving the puck, he came along at the right time.” Kim found his footing this season after his first two junior seasons. He spent 2017-18 in the British Columbia Hockey League and split last season between

the NAHL and AJHL. “This is my third year of juniors and playing part of last season in the AJ helped me become familiar with the league,” Kim said. “The coaches here have helped my game a lot, as has the league’s playing style. The success of our team has played a role in it, too.” Kim has designs on becoming an engineer, and that

played a big role in his decision to commit to Air Force. “When you look at how good that school is and all the opportunities they have there, it was an easy choice,” he said. Robinson, who was born in Tennessee and played hockey there until he was 14, can relate. “Growing up where I did, I never had a dream school for hockey,” he said. “I didn’t know what I was looking for, so for me, academics were a big factor. I wanted an Ivy League-caliber education, and

n the eight years since his LA Selects 1999 team won the Quebec International Pee Wee Hockey Tournament, Cooper Haar has watched one teammate after another from that team go on to bigger things. For starters, four players became NHL draft picks and another (Cayla Barnes) won an Olympic gold medal. Others have started college careers. In late February, it was Haar’s turn. “You don’t think about it at the time when you’re 12, but you look back and realize what an amazing group that was,” said Haar, who has committed to play NCAA Division I hockey at Canisius College (Atlantic Hockey). The commit came in Haar’s fourth season of junior hockey, a journey that has taken him to four teams in two leagues. “It’s great to see him get rewarded,” said Shawn Pitcher, his longtime coach with the Selects and the Los Angeles Jr. Kings. “He stuck with it.” Haar’s game has come together since being traded to the NAHL’s Aberdeen Wings earlier this season. Haar, who also played for the Anaheim Jr. Ducks, had 42 points (17 goals, 25 assists) through 46 games. “I had lacked a bit of confidence until I got here,” Haar said. “Coach (Scott) Langer has instilled that in me. He relies on me to put up points and be a leader in the locker room. That’s what I’ve tried to do.” Canisius is getting a player who brings size (6-foot-3, 209 pounds), skill and a high hockey IQ, Pitcher said. “’Coop’ was always a bigger kid, and it can take more time for them to develop,” he said. “From an early age, you could see he was smart with the puck and had a lot of potential. The other thing is he’s a good kid and a good teammate who always plays hard.” Haar, who is taking 12 credits of online college courses this semester, is excited to resume taking classes in person this fall, even if it is more than 2,500 miles from his hometown of Huntington Beach. “Canisius is a great opportunity for me,” he said. “Buffalo is a good area, and the school is very good academically. Those were important factors.” 20

I realized I could play a sport I loved and get an education.” While Kim excels at producing offense, the 6-foor-3, 215-pound Robinson has embraced a different mission – defense. “I try to use my size to my advantage,” he said. “I want to be matched up against the top lines and not make it easy on them. “The USHL was a huge draw for me because you’re playing against NHL draft picks and future college and pro players. My role is defense first, but I have to break the puck out well and have my teammates backs.” His coach, California native Oliver David, called Robinson “the anchor of our defense.” Robinson, who is an alternate captain, has brought plenty of value off the ice as well. “He’s the only one like him,” David said. “He’s mature, driven, and self-motivated. He’s all about the team, and he’s a big reason Dubuque has had the success it has the past two seasons. “His character and his passion for improvement are off the charts. He’s a model for what we’d want to recruit every time.” At times, winning can take a back seat in junior hockey. After all, college and pro careers are within sight. That’s not the case with Robinson, who played 16U AAA with the Jr. Sharks in 2015-16. “He totally buys into the concept of making the most of what’s in front of you,” David said. “And he brings everyone along. He’s the example of doing things right every day.” Both are on track to begin their careers this fall.

t. Lawrence University checked a lot of boxes for San Diego native Sam Deckhut. “I liked the coaches, and I knew (head coach) Brent Brekke from his time at Miami,” said Deckhut, who committed to the NCAA Division I Saints (ECAC Hockey) in mid-February. “I like that it’s a smaller school, the academics are strong, the new rink looks awesome, and they’re trying to build a family culture.” Deckhut, who is a junior at Salisbury Prep in Connecticut, is a 5-foot-10 forward who plays the game with pace and a playmaker’s eye. That, however, doesn’t come at the expense of other areas of the game. “I’ve worked hard to develop my 200-foot game,” he said. Deckhut, a 2002 birth year, began playing for the San Diego Saints out of the Kroc Center. He also skated for the La Jolla Jaguars and the Anaheim Jr. Ducks before playing three seasons for the San Diego Jr. Gulls. He called Jr. Gulls coaches Craig Carlyle, Phil Bateman and Noah Babin huge influences on helping him grow his game. “He’s a great leader, but he does it more by example than being loud,” said Carlyle, who coached Deckhut at 13U AAA. “He’s not real big, but nobody could hit him. He was slippery, a very shifty skater. His agility stands out, and he has great hockey sense, but he’s not a one-dimensional player. He always was very good on defense.” The 2002 Jr. Gulls group won the 14U CAHA Tier I state title in 2017. “That was a pretty special group,” recalled Carlyle, the club’s hockey director. “And Sam was a big part of that. He was our most talented player, and he had been for a few years.” It was with the Jr. Gulls that he experienced his favorite California hockey memory – playing in the Quebec International Pee Wee Hockey Tournament in 2015. “Even though we lost in the final, it was one of the best experiences I’ve ever had,” Deckhut said. “I enjoyed my host family there a lot and playing the final game in an NHL rink was incredible.”