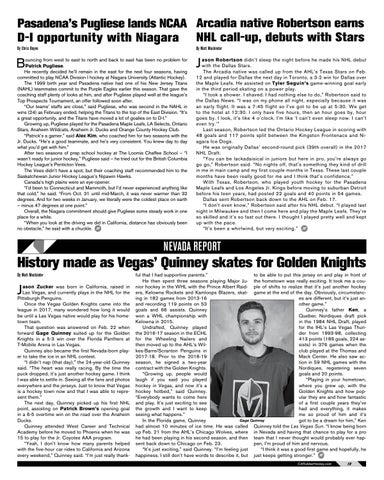 ouncing from west to east to north and back to east has been no problem for Patrick Pugliese. He recently decided he’ll remain in the east for the next four seasons, having committed to play NCAA Division I hockey at Niagara University (Atlantic Hockey). The 1999 birth year and Pasadena native had one of his New Jersey Titans (NAHL) teammates commit to the Purple Eagles earlier this season. That gave the coaching staff plenty of looks at him, and after Pugliese played well at the league’s Top Prospects Tournament, an offer followed soon after. “Our teams’ staffs are close,” said Pugliese, who was second in the NAHL in wins (24) as February ended, helping the Titans to the top of the East Division. “It’s a great opportunity, and the Titans have moved a lot of goalies on to D-I.” Growing up, Pugliese played for the Pasadena Maple Leafs, LA Selects, Ontario Stars, Anaheim Wildcats, Anaheim Jr. Ducks and Orange County Hockey Club. “Patrick’s a gamer,” said Alex Kim, who coached him for two seasons with the Jr. Ducks. “He’s a good teammate, and he’s very consistent. You knew day to day what you’d get with him.” After two seasons of prep school hockey at The Loomis Chaffee School – “I wasn’t ready for junior hockey,” Pugliese said – he tried out for the British Columbia Hockey League’s Penticton Vees. The Vees didn’t have a spot, but their coaching staff recommended him to the Saskatchewan Junior Hockey League’s Nipawin Hawks. Canada’s high plains were an eye-opener. “I’d been to Connecticut and Mammoth, but I’d never experienced anything like that cold,” he said. “From Oct. 31 until mid-March, it was never warmer than 32 degrees. And for two weeks in January, we literally were the coldest place on earth – minus 47 degrees at one point.” Overall, the Niagara commitment should give Pugliese some steady work in one place for a while. “When you look at the driving we did in California, distance has obviously been no obstacle,” he said with a chuckle.

ason Robertson didn’t sleep the night before he made his NHL debut with the Dallas Stars. The Arcadia native was called up from the AHL’s Texas Stars on Feb. 12 and played for Dallas the next day in Toronto, a 3-2 win for Dallas over the Maple Leafs. He assisted on Tyler Seguin’s game-winning goal early in the third period skating on a power play. “I took a shower. I shaved. I had nothing else to do,” Robertson said to the Dallas News. “I was on my phone all night, especially because it was an early flight. It was a 7:45 flight so I’ve got to be up at 5:30. We get to the hotel at 12:30. I only have five hours, then an hour goes by, hour goes by. I look, it’s like 4 o’clock. I’m like ‘I can’t even sleep now. I can’t even try.’” Last season, Robertson led the Ontario Hockey League in scoring with 48 goals and 117 points split between the Kingston Frontenacs and Niagara Ice Dogs. He was originally Dallas’ second-round pick (39th overall) in the 2017 NHL Draft. “You can be lackadaisical in juniors but here in pro, you’re always go go go,” Robertson said. “No nights off, that’s something they kind of drill in me in main camp and my first couple months in Texas. These last couple months have been really good for me and I think that’s confidence.” With Texas, Robertson, who played youth hockey for the Pasadena Maple Leafs and Los Angeles Jr. Kings before moving to suburban Detroit before his teen years, had posted 22 goals and 40 points in 54 games. Dallas sent Robertson back down to the AHL on Feb. 17. “I don’t even know,” Robertson said after his NHL debut. “I played last night in Milwaukee and then I come here and play the Maple Leafs. They’re so skilled and it’s so fast out there. I thought I played pretty well and kept up with the pace. “It’s been a whirlwind, but very exciting.”

ason Zucker was born in California, raised in Las Vegas, and currently plays in the NHL for the Pittsburgh Penguins. Once the Vegas Golden Knights came into the league in 2017, many wondered how long it would be until a Las Vegas native would play for his hometown team. That question was answered on Feb. 22 when forward Gage Quinney suited up for the Golden Knights in a 5-3 win over the Florida Panthers at T-Mobile Arena in Las Vegas. Quinney also became the first Nevada-born player to take the ice in an NHL contest. “I didn’t nap (that day),” the 24-year-old Quinney said. “The heart was really racing. By the time the puck dropped, it’s just another hockey game. I think I was able to settle in. Seeing all the fans and photos everywhere and the jerseys. Just to know that Vegas is a hockey town now and that I was able to represent them.” The next day, Quinney picked up his first NHL point, assisting on Patrick Brown’s opening goal in a 6-5 overtime win on the road over the Anaheim Ducks. Quinney attended West Career and Technical Academy before he moved to Phoenix when he was 15 to play for the Jr. Coyotes AAA program. “Yeah, I don’t know how many parents helped with the five-hour car rides to California and Arizona every weekend,” Quinney said. “I’m just really thank-

to be able to put this jersey on and play in front of ful that I had supportive parents.” He then spent three seasons playing Major Ju- the hometown was really exciting. It took me a counior hockey in the WHL with the Prince Albert Raid- ple of shifts to realize that it’s just another hockey ers, Kelowna Rockets and Kamloops Blazers, skat- game at the end of the day. Obviously, circumstances are different, but it’s just aning in 182 games from 2013-16 other game.” and recording 119 points on 53 Quinney’s father Ken, a goals and 66 assists. Quinney Quebec Nordiques draft pick won a WHL championship with in the 1984 NHL Draft, played Kelowna in 2015. for the IHL’s Las Vegas ThunUndrafted, Quinney played der from 1993-98, collecting the 2016-17 season in the ECHL 413 points (189 goals, 224 asfor the Wheeling Nailers and sists) in 376 games when the then moved up to the AHL’s Wilkes-Barre/Scranton Penguins in club played at the Thomas and Mack Center. He also saw ac2017-18. Prior to the 2018-19 tion in 59 NHL games with the season, he signed a two-year Nordiques, registering seven contract with the Golden Knights. goals and 20 points. “Growing up, people would “Playing in your hometown, laugh if you said you played where you grew up, with the hockey in Vegas, and now it’s a Golden Knights and how pophockey hotbed,” said Quinney. ular they are and how fantastic “Everybody wants to come here of a first couple years they’ve and play. It’s just exciting to see had and everything, it makes the growth and I want to keep seeing what happens.” me so proud of him and it’s Gage Quinney In the Florida game, Quinney got to be a dream for him,” Ken had almost 10 minutes of ice time. He was called Quinney told the Las Vegas Sun. “I know being born up Feb. 21 from the AHL’s Chicago Wolves, where in Nevada and having that chance to play for a pro he had been playing in his second season, and then team that I never thought would probably ever hapsent back down to Chicago on Feb. 23. pen, I’m proud of him and nervous. “I think it was a good first game and hopefully, he “It’s just exciting,” said Quinney. “I’m feeling just happiness. I still don’t have words to describe it, but just keeps getting stronger.” CARubberHockey.com