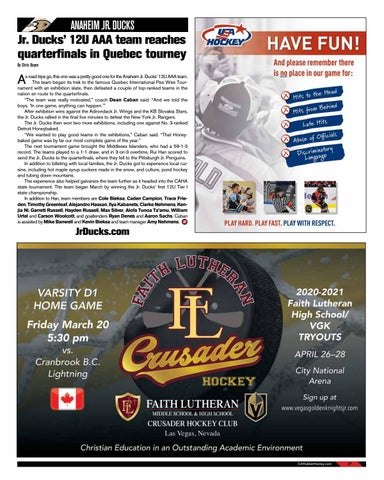 s road trips go, this one was a pretty good one for the Anaheim Jr. Ducks’ 12U AAA team. The team began its trek to the famous Quebec International Pee Wee Tournament with an exhibition slate, then defeated a couple of top-ranked teams in the nation en route to the quarterfinals. “The team was really motivated,” coach Dean Caban said. “And we told the boys, ‘In one game, anything can happen.’” After exhibition wins against the Adirondack Jr. Wings and the KB Slovakia Stars, the Jr. Ducks rallied in the final five minutes to defeat the New York Jr. Rangers. The Jr. Ducks then won two more exhibitions, including one against No. 3-ranked Detroit Honeybaked. “We wanted to play good teams in the exhibitions,” Caban said. “That Honeybaked game was by far our most complete game of the year.” The next tournament game brought the Middlesex Islanders, who had a 59-1-3 record. The teams played to a 1-1 draw, and in 3-on-3 overtime, Rui Han scored to send the Jr. Ducks to the quarterfinals, where they fell to the Pittsburgh Jr. Penguins. In addition to billeting with local families, the Jr. Ducks got to experience local cuisine, including hot maple syrup suckers made in the snow, and culture, pond hockey and tubing down mountains. The experience also helped galvanize the team further as it headed into the CAHA state tournament. The team began March by winning the Jr. Ducks’ first 12U Tier I state championship. In addition to Han, team members are Cole Bieksa, Caden Campion, Trace Frieden, Timothy Greenleaf, Alejandro Hassan, Ilya Kabanets, Clarke Nehmens, Kenjia Ni, Garrett Russell, Hayden Russell, Max Silver, Alofa Tunoa Ta’amu, William Urtel and Carson Woolcott, and goaltenders Ryan Denes and Aaron Sachs. Caban is assisted by Mike Banwell and Kevin Bieksa and team manager Amy Nehmens.