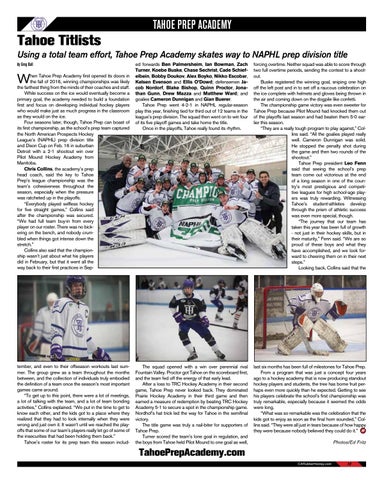 hen Tahoe Prep Academy first opened its doors in the fall of 2016, winning championships was likely the farthest thing from the minds of their coaches and staff. While success on the ice would eventually become a primary goal, the academy needed to build a foundation first and focus on developing individual hockey players who would make just as much progress in the classroom as they would on the ice. Four seasons later, though, Tahoe Prep can boast of its first championship, as the school’s prep team captured the North American Prospects Hockey League’s (NAPHL) prep division title and Dixon Cup on Feb. 16 in suburban Detroit with a 2-1 shootout win over Pilot Mound Hockey Academy from Manitoba. Chris Collins, the academy’s prep head coach, said the key to Tahoe Prep’s league championship was the team’s cohesiveness throughout the season, especially when the pressure was ratcheted up in the playoffs. “Everybody played selfless hockey for five straight games,” Collins said after the championship was secured. “We had full team buy-in from every player on our roster. There was no bickering on the bench, and nobody crumbled when things got intense down the stretch.” Collins also said that the championship wasn’t just about what his players did in February, but that it went all the way back to their first practices in Sep-

tember, and even to their offseason workouts last summer. The group grew as a team throughout the months between, and the collection of individuals truly embodied the definition of a team once the season’s most important games came around. “To get up to this point, there were a lot of meetings, a lot of talking with the team, and a lot of team bonding activities,” Collins explained. “We put in the time to get to know each other, and the kids got to a place where they realized that they had to look internally when they were wrong and just own it. It wasn’t until we reached the playoffs that some of our team’s players really let go of some of the insecurities that had been holding them back.” Tahoe’s roster for its prep team this season includ-

forcing overtime. Neither squad was able to score through two full overtime periods, sending the contest to a shootout. Buske registered the winning goal, sniping one high off the left post and in to set off a raucous celebration on the ice complete with helmets and gloves being thrown in the air and coming down on the dogpile like confetti. The championship game victory was even sweeter for Tahoe Prep because Pilot Mound had knocked them out of the playoffs last season and had beaten them 5-0 earlier this season. “They are a really tough program to play against,” Collins said. “All the goalies played really well. Cameron Dunnigan was solid. He stopped the penalty shot during the game and then two rounds of the shootout.” Tahoe Prep president Leo Fenn said that seeing the school’s prep team come out victorious at the end of a long season in one of the country’s most prestigious and competitive leagues for high school-age players was truly rewarding. Witnessing Tahoe’s student-athletes develop through the prism of athletic success was even more special, though. “The journey that our team has taken this year has been full of growth - not just in their hockey skills, but in their maturity,” Fenn said. “We are so proud of these boys and what they have accomplished, and we look forward to cheering them on in their next steps.” Looking back, Collins said that the

The squad opened with a win over perennial rival Fountain Valley. Proctor got Tahoe on the scoreboard first, and the team fed off the energy of that early lead. After a loss to TRC Hockey Academy in their second game, Tahoe Prep never looked back. They dominated Prairie Hockey Academy in their third game and then earned a measure of redemption by beating TRC Hockey Academy 5-1 to secure a spot in the championship game. Nordhof’s hat trick led the way for Tahoe in the semifinal victory. The title game was truly a nail-biter for supporters of Tahoe Prep. Turner scored the team’s lone goal in regulation, and the boys from Tahoe held Pilot Mound to one goal as well,

last six months has been full of milestones for Tahoe Prep. From a program that was just a concept four years ago to a hockey academy that is now producing standout hockey players and students, the tree has borne fruit perhaps even more quickly than he expected. Getting to see his players celebrate the school’s first championship was truly remarkable, especially because it seemed the odds were long. “What was so remarkable was the celebration that the kids got to enjoy as soon as the final horn sounded,” Collins said. “They were all just in tears because of how happy they were because nobody believed they could do it.” Photos/Ed Fritz