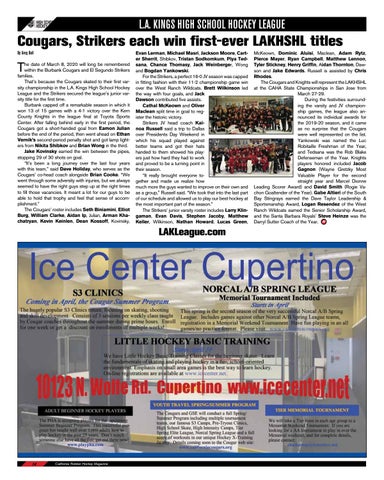 he date of March 8, 2020 will long be remembered within the Burbank Cougars and El Segundo Strikers families. That’s because the Cougars skated to their first varsity championship in the L.A. Kings High School Hockey League and the Strikers secured the league’s junior varsity title for the first time. Burbank capped off a remarkable season in which it won 13 of 15 games with a 4-1 victory over the Kern County Knights in the league final at Toyota Sports Center. After falling behind early in the first period, the Cougars got a short-handed goal from Eamon Julian before the end of the period, then went ahead on Ethan Vernik’s second-period penalty shot and got lamp lighters from Nikita Shibkov and Brian Wong in the third. Jake Kovinsky earned the win between the pipes, stopping 29 of 30 shots on goal. “It’s been a long journey over the last four years with this team,” said Dave Holiday, who serves as the Cougars’ co-head coach alongside Brian Cooke. “We went through some adversity with injuries, but we always seemed to have the right guys step up at the right times to fill those vacancies. It meant a lot for our guys to be able to hold that trophy and feel that sense of accomplishment.” The Cougars’ roster includes Seth Biniamini, Elliot Burg, William Clarke, Aidan Ip, Julian, Arman Khachatryan, Kevin Keinlen, Dean Kossoff, Kovinsky,

Evan Lerman, Michael Masri, Jackson Moore, Carter Sherrit, Shibkov, Tristan Sodkomkum, Piya Tedsana, Chance Thomasy, Jack Weinberger, Wong and Bogdan Yankowski. For the Strikers, a perfect 16-0 JV season was capped in fitting fashion with their 11-2 championship game win over the West Ranch Wildcats. Brett Wilkinson led the way with four goals, and Jack Dawson contributed five assists. Cathal McKeown and Oliver Maclean split time in goal to register the historic victory. Strikers JV head coach Kainoa Russell said a trip to Dallas over Presidents Day Weekend in which his squad played against better teams and got their hats handed to them showed his players just how hard they had to work and proved to be a turning point in their season. “It really brought everyone together and made us realize how much more the guys wanted to improve on their own and as a group,” Russell said. “We took that into the last part of our schedule and allowed us to play our best hockey at the most important part of the season.” The Strikers’ junior varsity roster includes Larry Klingaman, Evan Davis, Stephen Jacoby, Matthew Keller, Wilkinson, Nathan Howard, Lucas Green,

McKeown, Dominic Aluisi, Maclean, Adam Rytz, Pierce Mayer, Ryan Campbell, Matthew Lennon, Tyler Stickney, Henry Griffin, Aidan Thornton, Dawson and Jake Edwards. Russell is assisted by Chris Rhodes. The Cougars and Knights will represent the LAKHSHL at the CAHA State Championships in San Jose from March 27-29. During the festivities surrounding the varsity and JV championship games, the league also announced its individual awards for the 2019-20 season, and it came as no surprise that the Cougars were well represented on the list. Yankowski was named the Luc Robitaille Freshman of the Year, and Tedsana was the Rob Blake Defenseman of the Year. Knights players honored included Jacob Gagnon (Wayne Gretzky Most Valuable Player for the second straight year and Marcel Dionne Leading Scorer Award) and David Smith (Rogie Vachon Goaltender of the Year). Gabe Altieri of the South Bay Stingrays earned the Dave Taylor Leadership &amp; Sportsmanship Award, Logan Resendez of the West Ranch Wildcats earned the Senior Scholarship Award, and the Santa Barbara Royals’ Steve Heinze was the Darryl Sutter Coach of the Year.