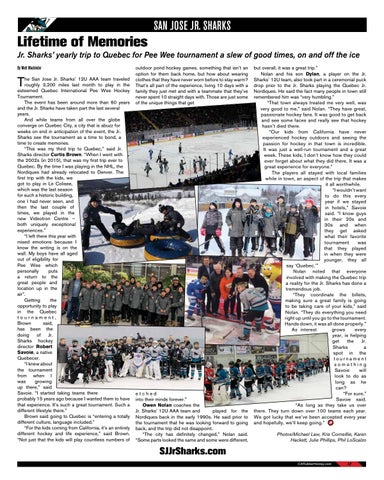 Jr. Sharks’ yearly trip to Quebec for Pee Wee tournament a slew of good times, on and off the ice By Matt Mackinder

he San Jose Jr. Sharks’ 12U AAA team traveled roughly 3,200 miles last month to play in the esteemed Quebec International Pee Wee Hockey Tournament. The event has been around more than 60 years and the Jr. Sharks have taken part the last several years. And while teams from all over the globe converge on Quebec City, a city that is abuzz for weeks on end in anticipation of the event, the Jr. Sharks see the tournament as a time to bond, a time to create memories. “This was my third trip to Quebec,” said Jr. Sharks director Curtis Brown. “When I went with the 2002s (in 2015), that was my first trip ever to Quebec. By the time I was playing in the NHL, the Nordiques had already relocated to Denver. The first trip with the kids, we got to play in Le Colisee, which was the last season for such a historic building, one I had never seen, and then the last couple of times, we played in the new Videotron Centre – both uniquely exceptional experiences.” “I left there this year with mixed emotions because I know the writing is on the wall. My boys have all aged out of eligibility for Pee Wee which personally puts a return to the great people and location up in the air”. Getting the opportunity to play in the Quebec tournament, Brown said, has been the doing of Jr. Sharks hockey director Robert Savoie, a native Quebecer. “I knew about the tournament from when I was growing up there,” said Savoie. “I started taking teams there probably 15 years ago because I wanted them to have that experience. It’s such a great tournament. Such a different lifestyle there.” Brown said going to Quebec is “entering a totally different culture, language included.” “For the kids coming from California, it’s an entirely different hockey and life experience,” said Brown. “Not just that the kids will play countless numbers of

outdoor pond hockey games, something that isn’t an option for them back home, but how about wearing clothes that they have never worn before to stay warm? That’s all part of the experience, living 10 days with a family they just met and with a teammate that they’ve never spent 10 straight days with. Those are just some of the unique things that get

etched into their minds forever.” Owen Nolan coaches the Jr. Sharks’ 12U AAA team and played for the Nordiques back in the early 1990s. He said prior to the tournament that he was looking forward to going back, and the trip did not disappoint. “The city has definitely changed,” Nolan said. “Some parts looked the same and some were different,

but overall, it was a great trip.” Nolan and his son Dylan, a player on the Jr. Sharks’ 12U team, also took part in a ceremonial puck drop prior to the Jr. Sharks playing the Quebec Jr. Nordiques. He said the fact many people in town still remembered him was “very humbling.” “That town always treated me very well, was very good to me,” said Nolan. “They have great, passionate hockey fans. It was good to get back and see some faces and really see that hockey hasn’t died there. “Our kids from California have never experienced hockey outdoors and seeing the passion for hockey in that town is incredible. It was just a well-run tournament and a great week. These kids, I don’t know how they could ever forget about what they did there. It was a great experience for everyone.” The players all stayed with local families while in town, an aspect of the trip that makes it all worthwhile. “I wouldn’t want to do this every year if we stayed in hotels,” Savoie said. “I know guys in their 20s and 30s and when they get asked what their favorite tournament was that they played in when they were younger, they all say ‘Quebec.’” Nolan noted that everyone involved with making the Quebec trip a reality for the Jr. Sharks has done a tremendous job. “They coordinate the billets, making sure a great family is going to be taking care of your kids,” said Nolan. “They do everything you need right up until you go to the tournament. Hands down, it was all done properly.” As interest grows every year, is helping get the Jr. Sharks a spot in the tournament something Savoie will look to do as long as he can? “For sure,” Savoie said. “As long as they take us over there. They turn down over 100 teams each year. We got lucky that we’ve been accepted every year and hopefully, we’ll keep going.” Photos/Michael Law, Kris Corneillie, Karen Hackett, Julie Phillips, Phil LoScalzo