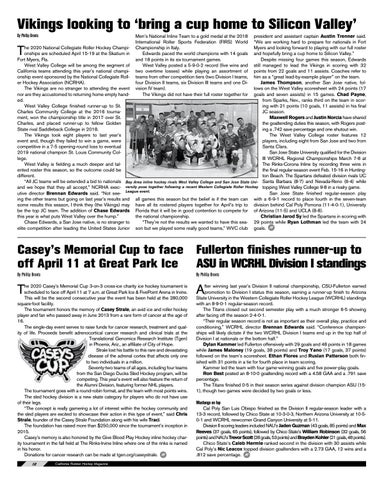 Men’s National Inline Team to a gold medal at the 2018 International Roller Sports Federation (FIRS) World Championship in Italy. Edwards paced the world champions with 14 goals and 18 points in its six tournament games. West Valley posted a 5-9-0-2 record (five wins and two overtime losses) while playing an assortment of teams from other competition tiers (two Division I teams, four Division II teams, six Division III teams and one Division IV team). The Vikings did not have their full roster together for

president and assistant captain Austin Trenner said. “We are working hard to prepare for nationals in Fort he 2020 National Collegiate Roller Hockey ChampiMyers and looking forward to playing with our full roster onships are scheduled April 15-19 at the Skatium in and hopefully bring a cup home to Silicon Valley.” Fort Myers, Fla. Despite missing four games this season, Edwards West Valley College will be among the segment of still managed to lead the Vikings in scoring with 32 California teams attending this year’s national champipoints from 22 goals and 11 assists. Coaches refer to onship event sponsored by the National Collegiate Rollhim as a “great lead-by-example player” on the team. er Hockey Association (NCRHA). James Thompson, another San Jose native, folThe Vikings are no stranger to attending the event lows on the West Valley scoresheet with 24 points (17 nor are they accustomed to returning home empty handgoals and seven assists) in 15 games. Chad Payne, ed. from Sparks, Nev., ranks third on the team in scorWest Valley College finished runner-up to St. ing with 21 points (10 goals, 11 assists) in his final Charles Community College at the 2016 tournaJC season. ment, won the championship title in 2017 over St. Maxwell Rogers and Justin Norcia have shared Charles, and placed runner-up to fellow Golden the goaltending duties this season, with Rogers postState rival Saddleback College in 2018. ing a .742 save percentage and one shutout win. The Vikings took eight players to last year’s The West Valley College roster features 12 event and, though they failed to win a game, were players, including eight from San Jose and two from competitive in a 7-5 opening-round loss to eventual Santa Clara. 2019 national champion St. Louis Community ColSan Jose State University qualified for the Division lege. III WCRHL Regional Championships March 7-8 at West Valley is fielding a much deeper and talThe Rinks-Corona Inline by recording three wins in ented roster this season, so the outcome could be the final regular-season event Feb. 15-16 in Huntingdifferent. ton Beach. The Spartans defeated division rivals UC “All JC teams will be extended a bid to nationals Bay Area inline hockey rivals West Valley College and San Jose State Uni- Santa Barbara (8-7) and Nevada-Reno (6-4) while and we hope that they all accept,” NCRHA exec- versity pose together following a recent Western Collegiate Roller Hockey topping West Valley College 9-8 in a rivalry game. utive director Brennan Edwards said. “Not see- League event. San Jose State finished regular-season play ing the other teams but going on last year’s results and all games this season but the belief is if the team can with a 6-9-1 record to place fourth in the seven-team some results this season, I think they (the Vikings) may have all its rostered players together for April’s trip to division behind Cal Poly Pomona (11-4-0-1), University be the top JC team. The addition of Chase Edwards Florida that it will be in good contention to compete for of Arizona (11-5) and UCLA (8-8). this year is what puts West Valley over the hump.” the national championship. Christian Jarod Sy led the Spartans in scoring with Chase Edwards, a San Jose native, is no stranger to “They’re not the results we wanted to have this sea- 29 points while Ryan Lothman led the team with 24 elite competition after leading the United States Junior son but we played some really good teams,” WVC club goals.

Fullerton finishes runner-up to ASU in WCRHL Division I standings

he 2020 Casey’s Memorial Cup 3-on-3 cross-ice charity ice hockey tournament is scheduled to face off April 11 at 7 a.m. at Great Park Ice &amp; FivePoint Arena in Irvine. This will be the second consecutive year the event has been held at the 280,000 square-foot facility. The tournament honors the memory of Casey Strale, an avid ice and roller hockey player and fan who passed away in June 2013 from a rare form of cancer at the age of 16. The single-day event serves to raise funds for cancer research, treatment and quality of life. Proceeds benefit adrenocortical cancer research and clinical trials at the Translational Genomics Research Institute (Tgen) in Phoenix, Ariz., an affiliate of City of Hope. Strale lost his battle to this rare and devastating disease of the adrenal cortex that affects only one to two individuals in a million. Seventy-two teams of all ages, including four teams from the San Diego Ducks Sled Hockey program, will be competing. This year’s event will also feature the return of the Alumni Division, featuring former NHL players. The tournament goes with a round-robin format, and the team with most points wins. The sled hockey division is a new skate category for players who do not have use of their legs. “The concept is really garnering a lot of interest within the hockey community and the sled players are excited to showcase their action in this type of event,” said Chris Strale, founder of the Casey Strale Foundation along with his wife Traci. The foundation has raised more than $250,000 since the tournament’s inception in 2015. Casey’s memory is also honored by the Give Blood Play Hockey inline hockey charity tournament in the fall held at The Rinks-Irvine Inline where one of the rinks is named in his honor. Donations for cancer research can be made at tgen.org/caseystrale. 10

fter winning last year’s Division II national championship, CSU-Fullerton earned promotion to Division I status this season, earning a runner-up finish to Arizona State University in the Western Collegiate Roller Hockey League (WCRHL) standings with an 8-9-0-1 regular-season record. The Titans closed out second semester play with a much stronger 6-5 showing after facing off the season 2-4-0-1. “Their regular season record is not as important as their overall play, practice and conditioning,” WCRHL director Brennan Edwards said. “Conference championships will likely dictate if the two WCRHL Division I teams end up in the top half of Division I at nationals or the bottom half.” Dylan Kammer led Fullerton offensively with 29 goals and 48 points in 18 games while James Maloney (19 goals, 38 points) and Troy Yano (17 goals, 37 points) followed on the team’s scoresheet. Ethan Flores and Ruslan Patterson both finished with 31 points in a tie for fourth place in team scoring. Kammer led the team with four game-winning goals and five power-play goals. Ron Best posted an 8-10-0 goaltending record with a 4.58 GAA and a .791 save percentage. The Titans finished 0-5 in their season series against division champion ASU (151), though two games were decided by two goals or less.