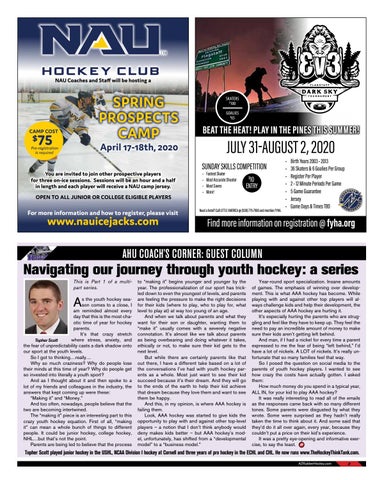 NAU Coaches and Staff will be hosting a

BEAT THE HEAT! PLAY IN THE PINES THIS SUMMER!

You are invited to join other prospective players for three on-ice sessions. Sessions will be an hour and a half in length and each player will receive a NAU camp jersey. OPEN TO ALL JUNIOR OR COLLEGE ELIGIBLE PLAYERS

For more information and how to register, please visit

Navigating our journey through youth hockey: a series This is Part 1 of a multipart series.

s the youth hockey season comes to a close, I am reminded almost every day that this is the most chaotic time of year for hockey parents. It’s that crazy stretch where stress, anxiety, and Topher Scott the fear of unpredictability casts a dark shadow onto our sport at the youth levels. So I got to thinking…really… Why so much craziness? Why do people lose their minds at this time of year? Why do people get so invested into literally a youth sport? And as I thought about it and then spoke to a lot of my friends and colleagues in the industry, the answers that kept coming up were these: “Making it” and “Money.” And too often, nowadays, people believe that the two are becoming intertwined. The “making it” piece is an interesting part to this crazy youth hockey equation. First of all, “making it” can mean a whole bunch of things to different people. It could be junior hockey, college hockey, NHL…but that’s not the point. Parents are being led to believe that the process

to “making it” begins younger and younger by the year. The professionalization of our sport has trickled down to even the youngest of levels, and parents are feeling the pressure to make the right decisions for their kids (where to play, who to play for, what level to play at) at way too young of an age. And when we talk about parents and what they want for their son or daughter, wanting them to “make it” usually comes with a severely negative connotation. It’s almost like we talk about parents as being overbearing and doing whatever it takes, ethically or not, to make sure their kid gets to the next level. But while there are certainly parents like that out there, I have a different take based on a lot of the conversations I’ve had with youth hockey parents as a whole. Most just want to see their kid succeed because it’s their dream. And they will go to the ends of the earth to help their kid achieve that dream because they love them and want to see them be happy. And this, in my opinion, is where AAA hockey is failing them. Look, AAA hockey was started to give kids the opportunity to play with and against other top-level players – a notion that I don’t think anybody would deny makes kids better – but AAA hockey’s model, unfortunately, has shifted from a “developmental model” to a “business model.”

Year-round sport specialization. Insane amounts of games. The emphasis of winning over development. This is what AAA hockey has become. While playing with and against other top players will always challenge kids and help their development, the other aspects of AAA hockey are hurting it. It’s especially hurting the parents who are struggling and feel like they have to keep up. They feel the need to pay an incredible amount of money to make sure their kids aren’t getting left behind. And man, if I had a nickel for every time a parent expressed to me the fear of being “left behind,” I’d have a lot of nickels. A LOT of nickels. It’s really unfortunate that so many families feel that way. So I posed the question on social media to the parents of youth hockey players. I wanted to see how crazy the costs have actually gotten. I asked them: How much money do you spend in a typical year, ALL IN, for your kid to play AAA hockey? It was really interesting to read all of the emails as the responses came back with so many different tones. Some parents were disgusted by what they wrote. Some were surprised as they hadn’t really taken the time to think about it. And some said that they’d do it all over again, every year, because they couldn’t put a price on their kid’s experience. It was a pretty eye-opening and informative exercise, to say the least.

Topher Scott played junior hockey in the USHL, NCAA Division I hockey at Cornell and three years of pro hockey in the ECHL and CHL. He now runs www.TheHockeyThinkTank.com. AZRubberHockey.com