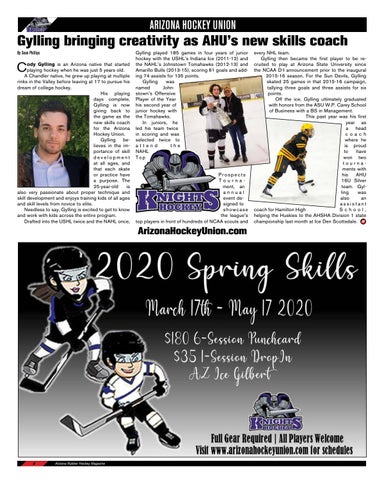 ody Gylling is an Arizona native that started playing hockey when he was just 5 years old. A Chandler native, he grew up playing at multiple rinks in the Valley before leaving at 17 to pursue his dream of college hockey. His playing days complete, Gylling is now giving back to the game as the new skills coach for the Arizona Hockey Union. Gylling believes in the importance of skill development at all ages, and that each skate or practice have a purpose. The 25-year-old is also very passionate about proper technique and skill development and enjoys training kids of all ages and skill levels from novice to elite. Needless to say, Gylling is excited to get to know and work with kids across the entire program. Drafted into the USHL twice and the NAHL once,

Gylling played 185 games in four years of junior hockey with the USHL’s Indiana Ice (2011-12) and the NAHL’s Johnstown Tomahawks (2012-13) and Amarillo Bulls (2013-15), scoring 61 goals and adding 74 assists for 135 points. Gylling was named Johnstown’s Offensive Player of the Year his second year of junior hockey with the Tomahawks. In juniors, he led his team twice in scoring and was selected twice to attend the NAHL Top Prospects Tournament, an annual event designed to showcase the league’s top players in front of hundreds of NCAA scouts and

every NHL team. Gylling then became the first player to be recruited to play at Arizona State University since the NCAA D-I announcement prior to the inaugural 2015-16 season. For the Sun Devils, Gylling skated 25 games in that 2015-16 campaign, tallying three goals and three assists for six points. Off the ice, Gylling ultimately graduated with honors from the ASU W.P. Carey School of Business with a BS in Management. This past year was his first year as a head c o a c h where he is proud to have won two tournaments with his AHU 16U Silver team. Gylling was also an assistant coach for Hamilton High School, helping the Huskies to the AHSHA Division 1 state championship last month at Ice Den Scottsdale. ​​