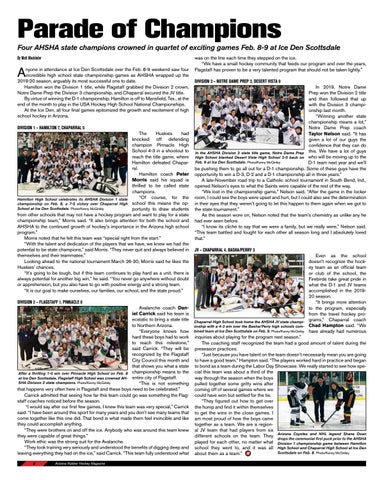 nyone in attendance at Ice Den Scottsdale over the Feb. 8-9 weekend saw four incredible high school state championship games as AHSHA wrapped up the 2019-20 season, arguably its most successful one to date. Hamilton won the Division 1 title, while Flagstaff grabbed the Division 2 crown, Notre Dame Prep the Division 3 championship, and Chaparral secured the JV title. By virtue of winning the D-1 championship, Hamilton is off to Mansfield, Tex., at the end of the month to play in the USA Hockey High School National Championships. At the Ice Den, all four final games epitomized the growth and excitement of high school hockey in Arizona. DIVISION 1 – HAMILTON 7, CHAPARRAL 5

The Huskies had knocked off defending champion Pinnacle High School 4-3 in a shootout to reach the title game, where Hamilton defeated Chaparral. Hamilton coach Peter Morris said his squad is thrilled to be called state champions. “Of course, for the Hamilton High School celebrates its AHSHA Division 1 state championship on Feb. 8, a 7-5 victory over Chaparral High school this means the opSchool at Ice Den Scottsdale. Photo/Kenny McGinley portunity to draw students from other schools that may not have a hockey program and want to play for a state championship team,” Morris said. “It also brings attention for both the school and AHSHA to the continued growth of hockey’s importance in the Arizona high school program.” Morris noted that he felt this team was “special right from the start.” “With the talent and dedication of the players that we have, we knew we had the potential to be state champions,” said Morris. “They never quit and always believed in themselves and their teammates.” Looking ahead to the national tournament March 26-30, Morris said he likes the Huskies’ chances. “It’s going to be tough, but if this team continues to play hard as a unit, there is always potential for another big win,” he said. “You never go anywhere without doubt or apprehension, but you also have to go with positive energy and a strong team. “It is our goal to make ourselves, our families, our school, and the state proud.”

was on the line each time they stepped on the ice. “We have a small hockey community that feeds our program and over the years, Flagstaff has proven to be a very talented program that should not be taken lightly.” DIVISION 3 – NOTRE DAME PREP 3, DESERT VISTA 0 In 2019, Notre Dame Prep won the Division 2 title and then followed that up with the Division 3 championship last month. “Winning another state championship means a lot,” Notre Dame Prep coach Taylor Nelson said. “It has given a lot of our guys the confidence that they can do In the AHSHA Division 3 state title game, Notre Dame Prep this. We have a lot of guys High School blanked Desert Vista High School 3-0 back on who will be moving up to the Feb. 9 at Ice Den Scottsdale. Photo/Kenny McGinley D-1 team next year and we’ll be pushing them to go all out for a D-1 championship. Some of these guys have the opportunity to win a D-3, D-2 and a D-1 championship all in three years.” A late-November road trip to a Catholic school tournament in South Bend, Ind., opened Nelson’s eyes to what the Saints were capable of the rest of the way. “We lost in the championship game,” Nelson said. “After the game in the locker room, I could see the boys were upset and hurt, but I could also see the determination in their eyes that they weren’t going to let this happen to them again when we got to the state tournament.” As the season wore on, Nelson noted that the team’s chemistry as unlike any he had ever seen before. “I know its cliché to say that we were a family, but we really were,” Nelson said. “This team battled and fought for each other all season long and I absolutely loved that.” JV – CHAPARRAL 4, BASHA/PERRY 3

DIVISION 2 – FLAGSTAFF 1, PINNACLE 0 Avalanche coach Daniel Carrick said his team is ecstatic to bring a state title to Northern Arizona. “Everyone knows how hard these boys had to work to reach this milestone,” said Carrick. “They will be recognized by the Flagstaff City Council this month and that shows you what a state After a thrilling 1-0 win over Pinnacle High School on Feb. 8 championship means to the at Ice Den Scottsdale, Flagstaff High School was crowned AH- entire city of Flagstaff. SHA Division 2 state champions. Photo/Kenny McGinley “This is not something that happens very often here in Flagstaff and these boys need to be celebrated.” Carrick admitted that seeing how far this team could go was something the Flagstaff coaches noticed before the season. “I would say after our first few games, I knew this team was very special,” Carrick said. “I have been around this sport for many years and you don’t see many teams that come together like this one did. That bond is what made them feel invincible and like they could accomplish anything. “They were brothers on and off the ice. Anybody who was around this team knew they were capable of great things.” Work ethic was the strong suit for the Avalanche. “They took training very seriously and understood the benefits of digging deep and leaving everything they had on the ice,” said Carrick. “This team fully understood what 6

Even as the school doesn’t recognize the hockey team as an official team or club of the school, the Firebirds take great pride in what the D-1 and JV teams accomplished in the 201920 season. “It brings more attention to the program, especially from the travel hockey programs,” Chaparral coach Chad Hampton said. “We have already had numerous

inquiries about playing for the program next season.” The coaching staff recognized the team had a good amount of talent during the preseason practices. “Just because you have talent on the team doesn’t necessarily mean you are going to have a good team,” Hampton said. “The players worked hard in practice and began to bond as a team during the Labor Day Showcase. We really started to see how special this team was about a third of the way through the season when the boys pulled together some gritty wins after coming off of several games where we could have won but settled for the tie. “They figured out how to get over the hump and find it within themselves to get the wins in the close games. I am most proud of how the boys came together as a team. We are a regional JV team that had players from six different schools on the team. They Arizona Coyotes and NHL legend Shane Doan drops the ceremonial first puck prior to the AHSHA played for each other, no matter what Division 1 championship game between Hamilton school they went to, and it was all High School and Chaparral High School at Ice Den Scottsdale on Feb. 8. Photo/Kenny McGinley about them as a team.”