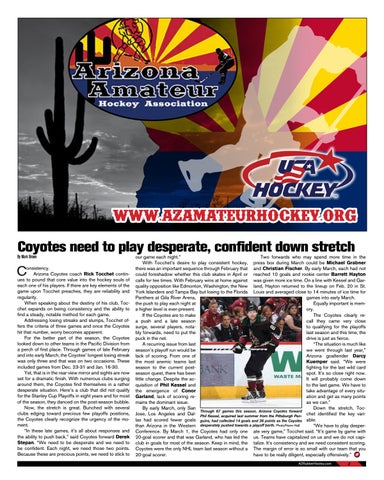 onsistency. Arizona Coyotes coach Rick Tocchet continues to pound that core value into the hockey souls of each one of his players. If there are key elements of the game upon Tocchet preaches, they are reliability and regularity. When speaking about the destiny of his club, Tocchet expands on being consistency and the ability to find a steady, notable method for each game. Addressing losing streaks and slumps, Tocchet offers the criteria of three games and once the Coyotes hit that number, worry becomes apparent. For the better part of the season, the Coyotes looked down to other teams in the Pacific Division from a perch of first place. Through games of late February and into early March, the Coyotes’ longest losing streak was only three and that was on two occasions. These included games from Dec. 23-31 and Jan. 16-30. Yet, that is in the rear-view mirror and sights are now set for a dramatic finish. With numerous clubs surging around them, the Coyotes find themselves in a rather desperate situation. Here’s a club that did not qualify for the Stanley Cup Playoffs in eight years and for most of the season, they danced on the post-season bubble. Now, the stretch is great. Bunched with several clubs edging toward precious few playoffs positions, the Coyotes clearly recognize the urgency of the moment. “In these late games, it’s all about responses and the ability to push back,” said Coyotes forward Derek Stepan. “We need to be desperate and we need to be confident. Each night, we need those two points. Because these are precious points, we need to stick to

our game each night.” Two forwards who may spend more time in the With Tocchet’s desire to play consistent hockey, press box during March could be Michael Grabner there was an important sequence through February that and Christian Fischer. By early March, each had not could foreshadow whether this club skates in April or reached 10 goals and rookie center Barrett Hayton calls for tee times. With February wins at home against was given more ice time. On a line with Kessel and Garquality opposition like Edmonton, Washington, the New land, Hayton returned to the lineup on Feb. 20 in St. York Islanders and Tampa Bay but losing to the Florida Louis and averaged close to 14 minutes of ice time for Panthers at Gila River Arena, games into early March. the push to play each night at Equally important is mema higher level is ever-present. ory. If the Coyotes are to make The Coyotes clearly rea push and a late season call they came very close surge, several players, notato qualifying for the playoffs bly forwards, need to put the last season and this time, the puck in the net. drive is just as fierce. A recurring issue from last “The situation is much like season’s playoff run would be we went through last year,” lack of scoring. From one of Arizona goaltender Darcy the most anemic teams last Kuemper said. “We were season to the current postfighting for the last wild card season quest, there has been spot. It’s so close right now. little change. Despite the acIt will probably come down quisition of Phil Kessel and to the last game. We have to the emergence of Conor take advantage of every situGarland, lack of scoring reation and get as many points mains the dominant issue. as we can.” By early March, only San Down the stretch, TocThrough 67 games this season, Arizona Coyotes forward Jose, Los Angeles and Dal- Phil Kessel, acquired last summer from the Pittsburgh Pen- chet identified the key varilas had scored fewer goals guins, had collected 14 goals and 36 points as the Coyotes able. than Arizona in the Western desperately pushed towards a playoff berth. Photo/Norm Hall “We have to play desperConference. By March 1, the Coyotes had only one ate very game,” Tocchet said. “It’s game by game with 20-goal scorer and that was Garland, who has led the us. Teams have capitalized on us and we do not capiclub in goals for most of the season. Keep in mind, the talize. It’s consistency and we need consistent scoring. Coyotes were the only NHL team last season without a The margin of error is so small with our team that you 20-goal scorer. have to be really diligent, especially offensively.” AZRubberHockey.com