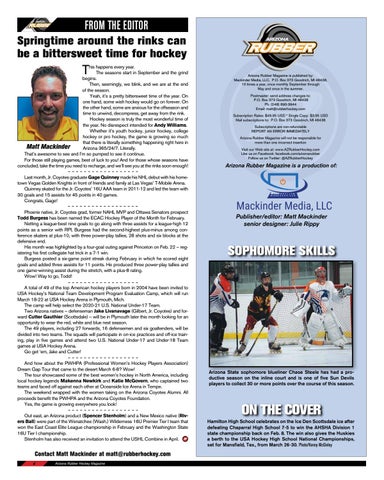 his happens every year. The seasons start in September and the grind begins. Then, seemingly, we blink, and we are at the end of the season. Yeah, it’s a pretty bittersweet time of the year. On one hand, some wish hockey would go on forever. On the other hand, some are anxious for the offseason and time to unwind, decompress, get away from the rink. Hockey season is truly the most wonderful time of the year. No disrespect intended for Andy Williams. Whether it’s youth hockey, junior hockey, college hockey or pro hockey, the game is growing so much that there is literally something happening right here in Matt Mackinder Arizona 365/24/7. Literally. That’s awesome to see and I’m so pumped to see it continue. For those still playing games, best of luck to you! And for those whose seasons have concluded, take the time you need to recharge, and we’ll see you at the rinks soon enough!

Arizona Rubber Magazine is a production of:

Last month, Jr. Coyotes graduate Gage Quinney made his NHL debut with his hometown Vegas Golden Knights in front of friends and family at Las Vegas’ T-Mobile Arena. Quinney skated for the Jr. Coyotes’ 16U AAA team in 2011-12 and led the team with 30 goals and 15 assists for 45 points in 40 games. Congrats, Gage! Phoenix native, Jr. Coyotes grad, former NAHL MVP and Ottawa Senators prospect Todd Burgess has been named the ECAC Hockey Player of the Month for February. Netting a league-best nine goals to go along with three assists for a league-high 12 points as a senior with RPI, Burgess had the second-highest plus-minus among conference skaters at plus-10, with three power-play tallies, 28 shots and six blocks at the defensive end. His month was highlighted by a four-goal outing against Princeton on Feb. 22 – registering his first collegiate hat trick in a 7-1 win. Burgess posted a six-game point streak during February in which he scored eight goals and added three assists for 11 points. He produced three power-play tallies and one game-winning assist during the stretch, with a plus-8 rating. Wow! Way to go, Todd!

A total of 49 of the top American hockey players born in 2004 have been invited to USA Hockey’s National Team Development Program Evaluation Camp, which will run March 18-22 at USA Hockey Arena in Plymouth, Mich. The camp will help select the 2020-21 U.S. National Under-17 Team. Two Arizona natives – defenseman Jake Livanavage (Gilbert, Jr. Coyotes) and forward Cutter Gauthier (Scottsdale) – will be in Plymouth later this month looking for an opportunity to wear the red, white and blue next season. The 49 players, including 27 forwards, 16 defensemen and six goaltenders, will be divided into two teams. The squads will participate in on-ice practices and off-ice training, play in five games and attend two U.S. National Under-17 and Under-18 Team games at USA Hockey Arena. Go get ‘em, Jake and Cutter! And how about the PWHPA (Professional Women’s Hockey Players Association) Dream Gap Tour that came to the desert March 6-8? Wow! The tour showcased some of the best women’s hockey in North America, including local hockey legends Makenna Newkirk and Katie McGovern, who captained two teams and faced off against each other at Oceanside Ice Arena in Tempe. The weekend wrapped with the women taking on the Arizona Coyotes Alumni. All proceeds benefit the PWHPA and the Arizona Coyotes Foundation. Yes, the game is growing everywhere you look! Out east, an Arizona product (Spencer Stenholm) and a New Mexico native (Rivers Ball) were part of the Wenatchee (Wash.) Wilderness 16U Premier Tier I team that won the East Coast Elite League championship in February and the Washington State 16U Tier I championship. Stenholm has also received an invitation to attend the USHL Combine in April.

Arizona State sophomore blueliner Chase Steele has had a productive season on the inline court and is one of five Sun Devils players to collect 30 or more points over the course of this season.

ON THE COVER Hamilton High School celebrates on the Ice Den Scottsdale ice after defeating Chaparral High School 7-5 to win the AHSHA Division 1 state championship back on Feb. 8. The win also gives the Huskies a berth to the USA Hockey High School National Championships, set for Mansfield, Tex., from March 26-30. Photo/Kenny McGinley