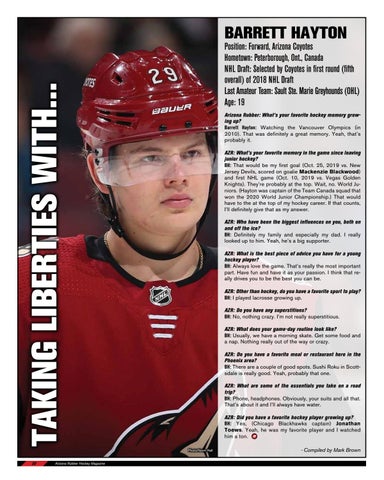 Position: Forward, Arizona Coyotes Hometown: Peterborough, Ont., Canada NHL Draft: Selected by Coyotes in first round (fifth overall) of 2018 NHL Draft Last Amateur Team: Sault Ste. Marie Greyhounds (OHL) Age: 19 Arizona Rubber: What’s your favorite hockey memory growing up? Barrett Hayton: Watching the Vancouver Olympics (in 2010). That was definitely a great memory. Yeah, that’s probably it. AZR: What’s your favorite memory in the game since leaving junior hockey? BH: That would be my first goal (Oct. 25, 2019 vs. New Jersey Devils, scored on goalie Mackenzie Blackwood) and first NHL game (Oct. 10, 2019 vs. Vegas Golden Knights). They’re probably at the top. Wait, no. World Juniors. (Hayton was captain of the Team Canada squad that won the 2020 World Junior Championship.) That would have to the at the top of my hockey career. If that counts, I’ll definitely give that as my answer. AZR: Who have been the biggest influences on you, both on and off the ice? BH: Definitely my family and especially my dad. I really looked up to him. Yeah, he’s a big supporter. AZR: What is the best piece of advice you have for a young hockey player? BH: Always love the game. That’s really the most important part. Have fun and have it as your passion. I think that really drives you to be the best you can be. AZR: Other than hockey, do you have a favorite sport to play? BH: I played lacrosse growing up. AZR: Do you have any superstitions? BH: No, nothing crazy. I’m not really superstitious. AZR: What does your game-day routine look like? BH: Usually, we have a morning skate. Get some food and a nap. Nothing really out of the way or crazy. AZR: Do you have a favorite meal or restaurant here in the Phoenix area? BH: There are a couple of good spots. Sushi Roku in Scottsdale is really good. Yeah, probably that one. AZR: What are some of the essentials you take on a road trip? BH: Phone, headphones. Obviously, your suits and all that. That’s about it and I’ll always have water. AZR: Did you have a favorite hockey player growing up? BH: Yes, (Chicago Blackhawks captain) Jonathan Toews. Yeah, he was my favorite player and I watched him a ton. Photo/Norm Hall