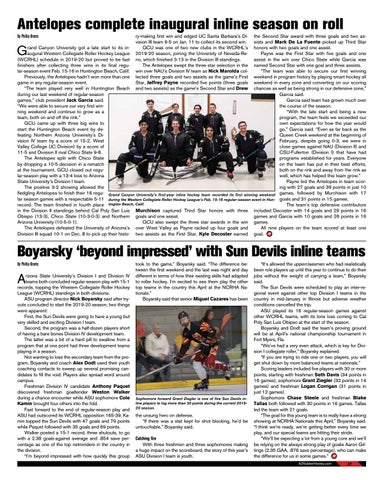 the Second Star award with three goals and two assists and Mark De La Fuente picked up Third Star rand Canyon University got a late start to its inhonors with two goals and one assist. augural Western Collegiate Roller Hockey League Payne was the First Star with five goals and one (WCRHL) schedule in 2019-20 but proved to be fast assist in the win over Chico State while Garcia was finishers after collecting three wins in its final regunamed Second Star with one goal and three assists. lar-season event Feb. 15-16 in Huntington Beach, Calif. “The team was able to secure our first winning Previously, the Antelopes hadn’t won more than one weekend in program history by playing smart hockey all game in any regular-season event. weekend in every zone and converting on our scoring “The team played very well in Huntington Beach chances as well as being strong in our defensive zone,” during our last weekend of regular-season Garcia said. games,” club president Jack Garcia said. Garcia said team has grown much over “We were able to secure our very first winthe course of the season. ning weekend and continue to grow as a “With the late start and being a new team, both on and off the rink.” program, the team feels we exceeded our GCU came up with three big wins to own expectations for how the year would start the Huntington Beach event by dego,” Garcia said. “Even as far back as the feating Northern Arizona University’s DiQueen Creek weekend at the beginning of vision IV team by a score of 15-2, West February, despite going 0-3, we were in Valley College (JC Division) by a score of close games against NAU (Division II) and 11-5 and Division II rival Chico State 9-8. CSU-Fullerton (Division I) that have had The Antelopes split with Chico State programs established for years. Everyone by dropping a 10-5 decision in a rematch on the team has put in their best efforts, at the tournament. GCU closed out reguboth on the rink and away from the rink as lar-season play with a 13-4 loss to Arizona well, which has helped this team grow.” State University’s Division I team. Payne led the Antelopes in team scorThe positive 3-2 showing allowed the ing with 27 goals and 39 points in just 10 fledgling Antelopes to finish their 16 regu- Grand Canyon University’s first-year inline hockey team recorded its first winning weekend games, followed by Murchison with 17 lar season games with a respectable 5-11 during the Western Collegiate Roller Hockey League’s Feb. 15-16 regular-season event in Hun- goals and 31 points in 15 games. record. The team finished in fourth place tington Beach, Calif. The team’s top defensive contributors in the Division II standings behind Cal Poly San Luis Murchison captured Third Star honors with three included Decoster with 14 goals and 29 points in 16 Obispo (13-3), Chico State (10-3-0-3) and Northern goals and one assist. games and Garcia with 10 goals and 26 points in 16 Arizona University (10-5-0-1). GCU also swept the three star awards in the win games. The Antelopes defeated the University of Arizona’s over West Valley as Payne racked up four goals and All nine players on the team scored at least one Division III squad 10-1 on Dec. 8 to pick up their histo- two assists as the First Star, Kyle Decoster earned goal.

rizona State University’s Division I and Division IV teams both concluded regular-season play with 15-1 records, topping the Western Collegiate Roller Hockey League (WCRHL) standings in both divisions. ASU program director Nick Boyarsky said after tryouts concluded to start the 2019-20 season, two things were apparent: First, the Sun Devils were going to have a young but very skilled and exciting Division I team. Second, the program was a half-dozen players short of having a bare bones Division IV development team. The latter was a bit of a hard pill to swallow from a program that at one point had three development teams playing in a season. Not wanting to lose the secondary team from the program, Boyarsky and coach Alex Dodt used their youth coaching contacts to sweep up several promising candidates to fill the void. Players also spread word around campus. Freshman Division IV candidate Anthony Paquet discovered freshman goaltender Weston Walker during a chance encounter while ASU sophomore Cole Kamin brought four others into the fold. Fast forward to the end of regular-season play and ASU had outscored its WCRHL opposition 165-39. Kamin topped the Sun Devils with 47 goals and 79 points while Paquet followed with 35 goals and 69 points. Walker posted a 15-1 record, three shutouts, to go with a 2.38 goals-against average and .854 save percentage as one of the top netminders in the country in the division. “I’m beyond impressed with how quickly this group

took to the game,” Boyarsky said. “The difference between the first weekend and the last was night and day different in terms of how their existing skills had adapted to roller hockey. I’m excited to see them play the other top teams in the country this April at the NCRHA Nationals.” Boyarsky said that senior Miguel Cazares has been

Sophomore forward Grant Ziegler is one of five Sun Devils inline players to log more than 30 points during the current 201920 season.

the unsung hero on defense. “If there was a stat kept for shot blocking, he’d be untouchable,” Boyarsky said. Catching fire With three freshmen and three sophomores making a huge impact on the scoreboard, the story of this year’s ASU Division I team is youth.

“It’s allowed the upperclassmen who had realistically been role players up until this year to continue to do their jobs without the weight of carrying a team,” Boyarsky said. The Sun Devils were scheduled to play an inter-regional event against other top Division I teams in the country in mid-January in Illinois but adverse weather conditions cancelled the trip. ASU played its 16 regular-season games against other WCRHL teams, with its lone loss coming to Cal Poly San Luis Obipso at the start of the season. Boyarsky and Dodt said the team’s proving ground will be at April’s national championship tournament in Fort Myers, Fla. “We’ve had a very even attack, which is key for Division I collegiate roller,” Boyarsky explained. “If you are trying to ride one or two players, you will get shut down by more balanced teams at nationals.” Scoring leaders included five players with 30 or more points, starting with freshman Seth Davis (34 points in 16 games), sophomore Grant Ziegler (32 points in 14 games) and freshman Logan Corrigan (31 points in just 12 games). Sophomore Chase Steele and freshman Blake Tallas both followed with 30 points in 16 games. Tallas led the team with 21 goals. “The goal for this young team is to really have a strong showing at NCRHA Nationals this April,” Boyarsky said. “I think we’re ready, we’re getting better every time we play, and our special teams are hitting their stride. “We’ll be expecting a lot from a young core and we’ll be relying on the always strong play of goalie Aaron Gittings (2.35 GAA, .876 save percentage), who can make the difference for us in some games.” AZRubberHockey.com