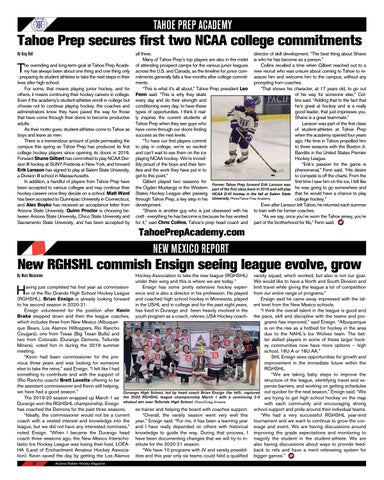 he overriding and long-term goal at Tahoe Prep Academy has always been about one thing and one thing only - preparing its student athletes to take the next steps in their lives after high school. For some, that means playing junior hockey, and for others, it means continuing their hockey careers in college. Even if the academy’s student-athletes enroll in college but choose not to continue playing hockey, the coaches and administrators know they have paved the way for those that have come through their doors to become productive adults. As their motto goes, student-athletes come to Tahoe as boys and leave as men. There is a tremendous amount of pride permeating the campus this spring as Tahoe Prep has produced its first college hockey players since opening its doors in 2016. Forward Shane Gilbert has committed to play NCAA Division III hockey at SUNY-Fredonia in New York, and forward Erik Larsson has signed to play at Salem State University, a Division III school in Massachusetts. In addition, a handful of players from Tahoe Prep have been accepted to various colleges and may continue their hockey careers once they decide on a school. Matt Ward has been accepted to Quinnipiac University in Connecticut, and Alex Boyko has received an acceptance letter from Arizona State University. Quinn Proctor is choosing between Arizona State University, Chico State University and Sacramento State University, and has been accepted by

all three. director of skill development. “The best thing about Shane Many of Tahoe Prep’s top players are also in the midst is who he has become as a person.” of attending prospect camps for the various junior leagues Collins recalled a time when Gilbert reached out to a across the U.S. and Canada, as the timeline for junior com- new recruit who was unsure about coming to Tahoe to remitments generally falls a few months after college commit- assure him and welcome him to the campus, without any ments. prompting from coaches. “This is what it’s all about,” Tahoe Prep president Leo “That shows his character, at 17 years old, to go out Fenn said. “This is why they skate of his way for someone else,” Colevery day and do their strength and lins said. “Adding that to the fact that conditioning every day, to have these he’s great at hockey and is a really types of opportunities. I think it realgood leader, that just impresses you. ly inspires the current students at Shane is a great teammate.” Tahoe Prep when they see guys who Larsson was part of the first class have come through our doors finding of student-athletes at Tahoe Prep success as the next levels. when the academy opened four years “To have our first players commit ago. His time in Tahoe propelled him to play in college, we’re so excited to three seasons with the Boston Jr. and can’t wait to see them on the ice Bandits in the United States Premier playing NCAA hockey. We’re incredHockey League. “Erik’s passion for the game is ibly proud of the boys and their famphenomenal,” Fenn said. “His desire ilies and the work they have put in to to compete is off the charts. From the get to this point.” first time I saw him on the ice, I felt like Gilbert played two seasons for Former Tahoe Prep forward Erik Larsson was the Ogden Mustangs in the Western part of the first class back in 2016 and will play he was going to go somewhere and States Hockey League after passing NCAA D-III hockey in the fall at Salem State that he would have a chance to play college hockey.” through Tahoe Prep, a key step in his University. Photo/Tahoe Prep Academy Even after Larsson left Tahoe, he returned each summer development. “Shane is another guy who is just obsessed with his to train with his former coaches. “As we say, once you’ve worn the Tahoe jersey, you’re craft - everything he has become is because he has worked for it,” said Chris Collins, Tahoe’s prep head coach and part of the brotherhood for life,” Fenn said.

New RGHSHL commish Ensign seeing league evolve, grow Hockey Association to take the new league (RGHSHL) under their wing and this is where we are today.” Ensign has some pretty extensive hockey experience and is also a director in his profession. He played and coached high school hockey in Minnesota, played in the USHL and in college and for the past eight years, has lived in Durango and been heavily involved in the youth program as a coach, referee, USA Hockey coach-

varsity squad, which worked, but also is not our goal. We would like to have a North and South Division and limit travel while giving the league a lot of competition aving just completed his first year as commissionfrom our entire range of programs.” er of the Rio Grande High School Hockey League Ensign said he came away impressed with the tal(RGHSHL), Brian Ensign is already looking forward ent level from the New Mexico schools. to his second season in 2020-21. “I think the overall talent in the league is good and Ensign volunteered for the position after Kevin the pace, skill and discipline with the teams and proBrake stepped down and then the league coaches, grams has improved,” said Ensign. “Albuquerque which includes three from New Mexico (Albuqueris on the rise as a hotbed for hockey in the area que Bears, Los Alamos Hilltoppers, Rio Rancho due to the NAHL’s Ice Wolves team. The betCougars), one from Texas (Big Texan Bulls) and ter skilled players in some of these larger hocktwo from Colorado (Durango Demons, Telluride ey communities now have more options – high Miners), voted him in during the 2019 summer meeting. school, 16U A or 16U AA.” “Kevin had been commissioner for the preStill, Ensign sees opportunities for growth and vious three years and was looking for someone improvement in the immediate future within the RGHSHL. else to take the reins,” said Ensign. “I felt like I had “We are taking baby steps to improve the something to contribute and with the support of structure of the league, identifying travel and ex(Rio Rancho coach) Brett Lovette offering to be pense barriers, and working on getting schedules the assistant commissioner and Kevin still helping, we have had a good season.” Durango High School, led by head coach Brian Ensign (far left), captured out quicker for the next season,” Ensign said. “We The 2019-20 season wrapped up March 1 as the 2020 RGHSHL league championship March 1 with a convincing 3-0 are trying to get high school hockey on the map with each community and encouraging strong Durango won the RGHSHL championship. Ensign shutout win over Telluride High School. Photo/Craig Arnwine has coached the Demons for the past three seasons. es trainer and helping the board with coaches support. school support and pride around their individual teams. “Ideally, the commissioner would not be a current “We had a very successful RGHSHL year-end “Overall, the varsity season went very well this coach with a vested interest and knowledge into the year,” Ensign said. “For me, it has been a learning year tournament and we want to continue to grow the covleague, but we did not have any interested nominees,” and I have really depended on others with historical erage and event. We are having discussions around noted Ensign. “When I became the Durango head knowledge to guide the way. During that process, I improving the grade expectations and monitoring to coach three seasons ago, the New Mexico Interscho- have been documenting changes that we will try to in- magnify the student in the student-athlete. We are lastic Ice Hockey League was losing their host, LOEA- stitute for the 2020-21 season. also having discussions about ways to provide feedHA (Land of Enchantment Amateur Hockey Associa“We have 10 programs with JV and varsity possibil- back to refs and have a merit refereeing system for tion). Kevin saved the day by getting the Los Alamos ities and this year only six teams could field a qualified bigger games.” By Matt Mackinder