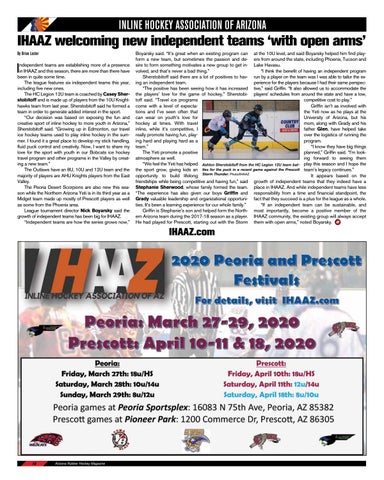 ndependent teams are establishing more of a presence in IHAAZ and this season, there are more than there have been in quite some time. The league features six independent teams this year, including five new ones. The HC Legion 12U team is coached by Casey Sherstobitoff and is made up of players from the 10U Knighthawks team from last year. Sherstobitoff said he formed a team in order to generate added interest in the sport. “Our decision was based on exposing the fun and creative sport of inline hockey to more youth in Arizona,” Sherstobitoff said. “Growing up in Edmonton, our travel ice hockey teams used to play inline hockey in the summer. I found it a great place to develop my stick handling, fluid puck control and creativity. Now, I want to share my love for the sport with youth in our Bobcats ice hockey travel program and other programs in the Valley by creating a new team.” The Outlaws have an 8U, 10U and 12U team and the majority of players are AHU Knights players from the East Valley. The Peoria Desert Scorpions are also new this season while the Northern Arizona Yeti is in its third year as a Midget team made up mostly of Prescott players as well as some from the Phoenix area. League tournament director Nick Boyarsky said the growth of independent teams has been big for IHAAZ. “Independent teams are how the series grows now,”

Boyarsky said. “It’s great when an existing program can at the 10U level, and said Boyarsky helped him find playform a new team, but sometimes the passion and de- ers from around the state, including Phoenix, Tucson and sire to form something motivates a new group to get in- Lake Havasu. volved, and that’s never a bad thing.” “I think the benefit of having an independent program Sherstobitoff said there are a lot of positives to hav- run by a player on the team was I was able to tailor the experience for the players because I had their same perspecing an independent team. “The positive has been seeing how it has increased tive,” said Griffin. “It also allowed us to accommodate the the players’ love for the game of hockey,” Sherstobi- players’ schedules from around the state and have a low, competitive cost to play.” toff said. “Travel ice programs Griffin isn’t as involved with come with a level of expectathe Yeti now as he plays at the tions and I’ve seen often that University of Arizona, but his can wear on youth’s love for hockey at times. With travel mom, along with Grady and his inline, while it’s competitive, I father Glen, have helped take over the logistics of running the really promote having fun, playprogram. ing hard and playing hard as a “I know they have big things team.” planned,” Griffin said. “I’m lookThe Yeti promote a positive ing forward to seeing them atmosphere as well. “We feel the Yeti has helped Ashton Sherstobitoff from the HC Legion 12U team bat- play this season and I hope the the sport grow, giving kids an tles for the puck in a recent game against the Prescott team’s legacy continues.” It appears based on the opportunity to build lifelong Storm Thunder. Photo/IHAAZ friendships while being competitive and having fun,” said growth of independent teams that they indeed have a Stephanie Sherwood, whose family formed the team. place in IHAAZ. And while independent teams have less “The experience has also given our boys Griffin and responsibility from a time and financial standpoint, the Grady valuable leadership and organizational opportuni- fact that they succeed is a plus for the league as a whole. ties. It’s been a learning experience for our whole family.” “If an independent team can be sustainable, and Griffin is Stephanie’s son and helped form the North- most importantly, become a positive member of the ern Arizona team during the 2017-18 season as a player. IHAAZ community, the existing group will always accept He had played for Prescott, starting out with the Storm them with open arms,” noted Boyarsky.