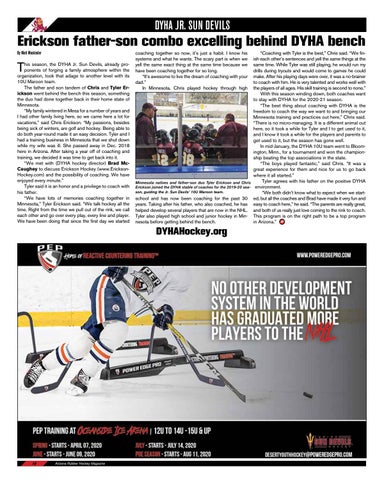 his season, the DYHA Jr. Sun Devils, already proponents of forging a family atmosphere within the organization, took that adage to another level with its 10U Maroon team. The father and son tandem of Chris and Tyler Erickson went behind the bench this season, something the duo had done together back in their home state of Minnesota. “My family wintered in Mesa for a number of years and I had other family living here, so we came here a lot for vacations,” said Chris Erickson. “My passions, besides being sick of winters, are golf and hockey. Being able to do both year-round made it an easy decision. Tyler and I had a training business in Minnesota that we shut down while my wife was ill. She passed away in Dec. 2018 here in Arizona. After taking a year off of coaching and training, we decided it was time to get back into it. “We met with (DYHA hockey director) Brad McCaughey to discuss Erickson Hockey (www.EricksonHockey.com) and the possibility of coaching. We have enjoyed every minute.” Tyler said it is an honor and a privilege to coach with his father. “We have lots of memories coaching together in Minnesota,” Tyler Erickson said. “We talk hockey all the time. Right from the time we pull out of the rink, we call each other and go over every play, every line and player. We have been doing that since the first day we started

coaching together so now, it’s just a habit. I know his systems and what he wants. The scary part is when we yell the same exact thing at the same time because we have been coaching together for so long. “It’s awesome to live the dream of coaching with your dad.” In Minnesota, Chris played hockey through high

school and has now been coaching for the past 30 years. Taking after his father, who also coached, he has helped develop several players that are now in the NHL. Tyler also played high school and junior hockey in Minnesota before getting behind the bench.

“Coaching with Tyler is the best,” Chris said. “We finish each other’s sentences and yell the same things at the same time. While Tyler was still playing, he would run my drills during tryouts and would come to games he could make. After his playing days were over, it was a no-brainer to coach with him. He is very talented and works well with the players of all ages. His skill training is second to none.” With this season winding down, both coaches want to stay with DYHA for the 2020-21 season. “The best thing about coaching with DYHA is the freedom to coach the way we want to and bringing our Minnesota training and practices out here,” Chris said. “There is no micro-managing. It is a different animal out here, so it took a while for Tyler and I to get used to it, and I know it took a while for the players and parents to get used to it, but the season has gone well. In mid-January, the DYHA 10U team went to Bloomington, Minn., for a tournament and won the championship beating the top associations in the state. “The boys played fantastic,” said Chris. “It was a great experience for them and nice for us to go back where it all started.” Tyler agrees with his father on the positive DYHA environment. “We both didn’t know what to expect when we started, but all the coaches and Brad have made it very fun and easy to coach here,” he said. “The parents are really great, and both of us really just love coming to the rink to coach. This program is on the right path to be a top program in Arizona.”