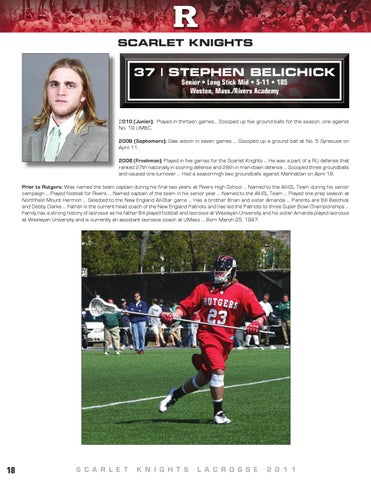 2010 (Junior): Played in thirteen games… Scooped up five ground balls for the season, one against No. 19 UMBC. 2009 (Sophomore): Saw action in seven games … Scooped up a ground ball at No. 5 Syracuse on April 11. 2008 (Freshman): Played in five games for the Scarlet Knights … He was a part of a RU defense that ranked 27th nationally in scoring defense and 28th in man-down defense … Scooped three groundballs and caused one turnover … Had a season-high two groundballs against Manhattan on April 18. Prior to Rutgers: Was named the team captain during his final two years at Rivers High School … Named to the All-ISL Team during his senior campaign … Played football for Rivers … Named captain of the team in his senior year … Named to the All-ISL Team … Played one prep season at Northfield Mount Hermon … Selected to the New England All-Star game … Has a brother Brian and sister Amanda … Parents are Bill Belichick and Debby Clarke … Father is the current head coach of the New England Patriots and has led the Patriots to three Super Bowl Championships … Family has a strong history of lacrosse as his father Bill played football and lacrosse at Wesleyan University and his sister Amanda played lacrosse at Wesleyan University and is currently an assistant lacrosse coach at UMass … Born March 25, 1987. 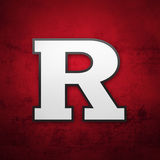