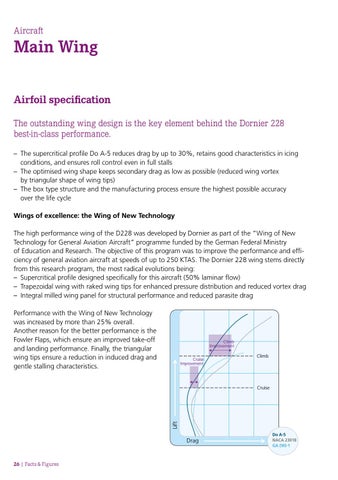 Main Wing Airfoil specification The outstanding wing design is the key element behind the Dornier 228 best-in-class performance. –– The supercritical profile Do A-5 reduces drag by up to 30%, retains good characteristics in icing conditions, and ensures roll control even in full stalls –– The optimised wing shape keeps secondary drag as low as possible (reduced wing vortex by triangular shape of wing tips) –– The box type structure and the manufacturing process ensure the highest possible accuracy over the life cycle Wings of excellence: the Wing of New Technology The high performance wing of the D228 was developed by Dornier as part of the “Wing of New Technology for General Aviation Aircraft“ programme funded by the German Federal Ministry of Education and Research. The objective of this program was to improve the performance and efficiency of general aviation aircraft at speeds of up to 250 KTAS. The Dornier 228 wing stems directly from this research program, the most radical evolutions being: –– Supercritical profile designed specifically for this aircraft (50% laminar flow) –– Trapezoidal wing with raked wing tips for enhanced pressure distribution and reduced vortex drag –– Integral milled wing panel for structural performance and reduced parasite drag Performance with the Wing of New Technology was increased by more than 25% overall. Another reason for the better performance is the Fowler Flaps, which ensure an improved take-off and landing performance. Finally, the triangular wing tips ensure a reduction in induced drag and gentle stalling characteristics. 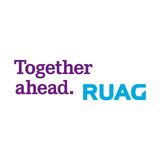 The Dornier 228 is the platform of choice for special mission operations taking place between low level and 10,000 ft. Military and governme...

The Dornier 228 is the platform of choice for special mission operations taking place between low level and 10,000 ft. Military and governme...