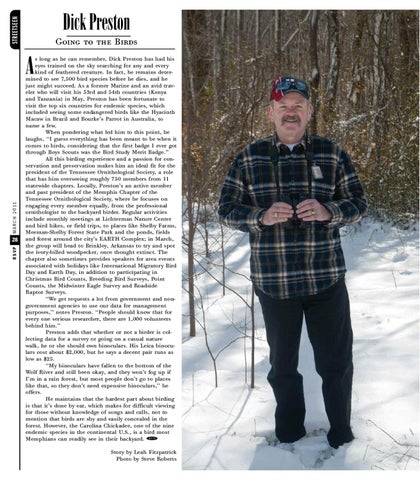 Dick Preston Going to the Birds

s long as he can remember, Dick Preston has had his eyes trained on the sky searching for any and every kind of feathered creature. In fact, he remains determined to see 7,500 bird species before he dies, and he just might succeed. As a former Marine and an avid traveler who will visit his 53rd and 54th countries (Kenya and Tanzania) in May, Preston has been fortunate to visit the top six countries for endemic species, which included seeing some endangered birds like the Hyacinth Macaw in Brazil and Bourke’s Parrot in Australia, to name a few. When pondering what led him to this point, he laughs, “I guess everything has been meant to be when it comes to birds, considering that the first badge I ever got through Boys Scouts was the Bird Study Merit Badge.” All this birding experience and a passion for conservation and preservation makes him an ideal fit for the president of the Tennessee Ornithological Society, a role that has him overseeing roughly 750 members from 11 statewide chapters. Locally, Preston’s an active member and past president of the Memphis Chapter of the Tennessee Ornithological Society, where he focuses on engaging every member equally, from the professional ornithologist to the backyard birder. Regular activities include monthly meetings at Lichterman Nature Center and bird hikes, or field trips, to places like Shelby Farms, Meeman-Shelby Forest State Park and the ponds, fields and forest around the city’s EARTH Complex; in March, the group will head to Brinkley, Arkansas to try and spot the ivory-billed woodpecker, once thought extinct. The chapter also sometimes provides speakers for area events associated with holidays like International Migratory Bird Day and Earth Day, in addition to participating in Christmas Bird Counts, Breeding Bird Surveys, Point Counts, the Midwinter Eagle Survey and Roadside Raptor Surveys. “We get requests a lot from government and nongovernment agencies to use our data for management purposes,” notes Preston. “People should know that for every one serious researcher, there are 1,000 volunteers behind him.” Preston adds that whether or not a birder is collecting data for a survey or going on a casual nature walk, he or she should own binoculars. His Leica binoculars cost about $2,000, but he says a decent pair runs as low as $25. “My binoculars have fallen to the bottom of the Wolf River and still been okay, and they won’t fog up if I’m in a rain forest, but most people don’t go to places like that, so they don’t need expensive binoculars,” he offers. He maintains that the hardest part about birding is that it’s done by ear, which makes for difficult viewing for those without knowledge of songs and calls, not to mention that birds are shy and easily concealed in the forest. However, the Carolina Chickadee, one of the nine endemic species in the continental U.S., is a bird most Memphians can readily see in their backyard. Story by Leah Fitzpatrick Photo by Steve Roberts 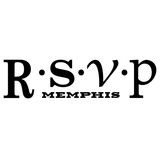 RSVP magazine is like no other publication in the city of Memphis. What began as simply “The Society Pages” more than a decade ago has evolv...

RSVP magazine is like no other publication in the city of Memphis. What began as simply “The Society Pages” more than a decade ago has evolv...